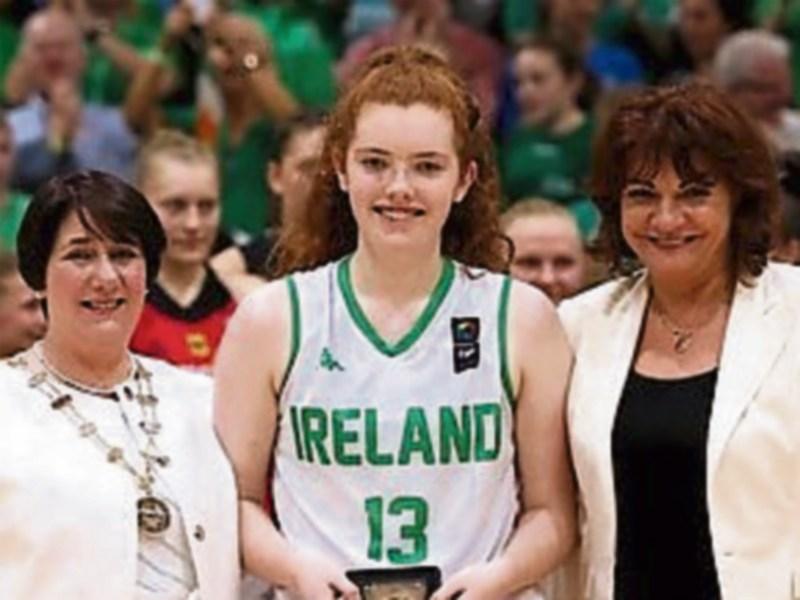 Claire Melia was selected for the All Star team after the final. Photo: ©INPHO/Tommy Dickson

Kildare’s Claire Melia and Sorcha Tiernan have cemented their place in Irish basketball history with a European silver medal.

Ireland’s unbeaten streak at the FIBA U18 Women’s European Championships finally came to an end in the final yesterday evening, as they lost out 67-43 to Germany.

Promotion to Division A is still assured, as is the squad’s status as Ireland’s most successful ever basketball team, and they were given a standing ovation at the final buzzer by the capacity crowd who have supported them every step of the way through a superb tournament.

“It’s incredible," said Head Coach Tommy O'Mahony. "Night after night we rolled from one game to the other, we didn’t get a chance to figure out what we’d just done. Tonight wasn’t our night, but the girls have to realize what they’ve done and how big it is in the whole scheme of things. It’s hard to believe, we won’t comprehend it for a few weeks I’d say, but it’s been great.”

It was the Germans’ athleticism that caused problems early on, particularly through 6’3 power forward Nyara Sabally, who will join Oregon Ducks in Division I of the NCAA after the tournament.

Louise Scannell helped to lift the siege with a massive three-pointer and Sabally soon hit the bench as foul trouble stunted her side’s momentum. Ireland landed five free-throws from six attempts but couldn’t handle Luisa Geiselsoder, who muscled her way to eight points and seven rebounds in the first quarter alone. Sorcha Tiernan’s long two re-energized the crowd, before Laura Schinkel stroked home on the first quarter buzzer from 30 feet for Germany to lead 24-12.

The German’s had an average winning margin of 37 points in the tournament and looked even more potent with their main weapons on the floor. It was the game’s smallest player, Annaliese Murphy, who impressed with a long two but Ireland’s offence was misfiring.

They were 20 points behind before Claire Melia rallied the troops with a three-point play and Bronagh Power Cassidy capped a 5-0 run for a 41-26 half time score line. Dayna Finn led the charge to eat into Germany’s lead in the third quarter.

Meanwhile, the winners were both penetrating inside and accurate from the perimeter, leaving Ireland short on means to shore up the defence. Once again it was substitute Annaliese Murphy who provided a spark with three-points from the win, but Germany had the game locked up at 60-35 by the end of the third. Ireland continued the fight in the fourth quarter, supported every step of the way by the sold out National Basketball Arena.

Even as the game began to look out of reach, the crowd that had been around for every single one of Ireland’s games, cheered and chanted. Germany steadily maintained their lead and it was clear they would see the game out.

This Irish team created history as the first international squad to reach a European final and also as the first Irish team to clinch promotion to the A Division. While it may not have worked out for them tonight, they have certainly cemented their place in Irish basketball history.