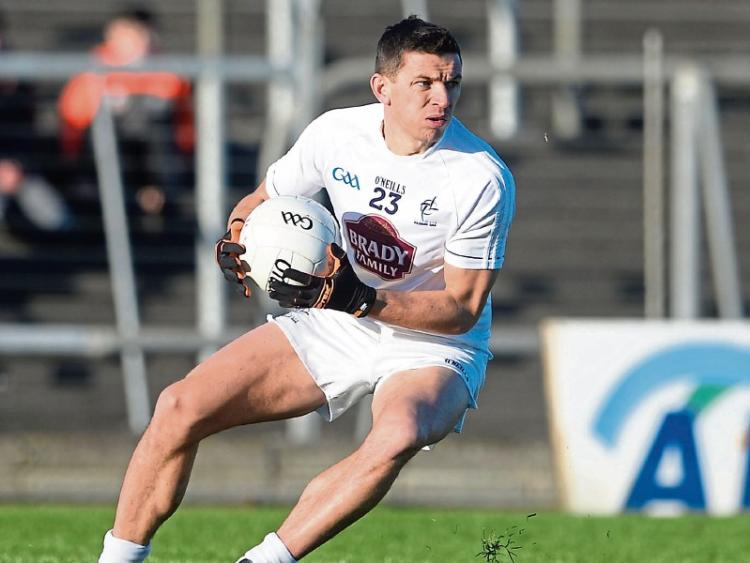 Naas stalwart, Eamonn Callaghan, has donned the white shirt of Kildare over 150 times at senior level throughout his fifteen year involvement with the Lilywhites, yet he still recalls the first time he walked on to the sacred turf of Croke Park and the immediate effect it had on him.

Talking to the Leinster Leader ahead of Saturday's Round 4B clash with Armagh (7 pm throw-in), he spoke of his initial experience of playing in Croke Park and recalls the  strange feeling he felt in his legs.

“I will never forget that first time and that funny, even strange feeling in my legs,  while finding your breath also caused real problems that day;  it was an entirely different experience and it took a bit of getting use to.

“Playing in the Leinster final adds to the tension and remember none of our lads ever played in a Leinster final prior to last Sunday week; only myself and Emmet (Bolton) have had that experience and I have no doubt that it affected the lads on the day against Dublin.”

Were you pleased with the display against Dublin?

“To be perfectly honest I was somewhat disappointed; we played well against Laois and Meath but I think we definitely under performed against Dublin; a lot of people think we did really well and there were no shortage of slaps on the back but remember we were beaten by nine points in a game that we, as a panel and a group of players, fully expected to win.”

We did give Dublin problems, added the former county captain, “but I firmly believe it was a case of another Leinster title slipping away that we could have won had we performed to our full ability; over the 70 plus minutes I feel there was a lot more in us.”

And how does this year's set-up compare with previous seasons?

“First of all the game has changed so much over the 15 years; really changed; maybe evolved is a better way to describe it but Cian is one of the new modern day managers; extremely well organised; his attention to detail is immense but most of all he is surrounded by a brilliant backroom team.

“That is another way the game has evolved” added Eamonn. “Years ago you had a manager, two selectors, a physio and maybe a doctor and that was it but now the backroom team has expanded and is a vital part of the entire set-up; being surrounded by the right backroom people is  essential these days; the right strength and conditioning people; the right nutritionalist; the psychologist, along with your selectors; the modern day selectors play a huge role these days.

Last year, continues Eamonn, “we had Padraig (Brennan), Bryan (Murphy) and Brian (Flanagan) and they were brilliant and fitted in really well but then for different reasons all three stepped away this year so it was extremely important to get in the right people and Roli (Sweeney) and Enda (Murphy) have been brilliant and a huge addition to the squad this season.

“These boys are top notch and when they take training; do drills with us the players can relate to them; when they are speaking they command huge respect as they have been there, seen it all and done it all before so it's great to have them alongside  Cian.”

Looking back on his long career Eamonn who was a member of the successful Ireland team in the International Rules Series back in 2011 and took over the captaincy of The Lilies after Johnny Doyle retired in 2013, acknowledges that injury-wise he has been very lucky, apart from that spell in 2012/13 when he went to the US  for an operation on his groin.

“I had an operation back in 2012 in May and another in the off-season the same year but I still wasn't right but in Jason Ryan's first year I got an operation on the hip in Waterford and that, thankfully, was the cure.

“Since that operation in Waterford I have barely missed a training session; I was really under pressure with my groin and got it operated on twice while all the time it was the hip that was causing the trouble and in fairness from the very start it was David Lyons (physio with Kildare at the time) who diagnosed it was the hip and not the groin.”

David was constantly saying to me in his opinion the hip was the problem and not the groin but “we got the groin operation done to see if it would work because those operations (groin) are more short term than the hip, but once I got the hip operation done  I was like a new man; which was strange after playing for nearly two years struggling with injury.”

The versatility of the Naas man knows no bounds; he has wore every number from 2 to 15 with the exception of 8 and 9, so what is his favourite position?

“I always felt wing back was my best position; then I was moved to wing forward, which I love playing now but the game has changed and when I picked up that injury back in 2012 I had to change my game completely; had to lose weight, trim down and it was then I was moved inside where I am playing now, a position I am very comfortable with  and while I can still play on the wing and feel I can do a job there; I feel I can really do a job inside these days and I feel that at the moment my game is more suited to the inside line.”

We often hear these days of the commitment that is involved playing at the top level  of the modern game while  at the same time holding down a permanent job, not forgetting home life.

Eamonn Callaghan is a garda stationed in South Dublin and his line of work involves various shifts from time to time as he explains.

“Night shift is not a problem as I arrive home around 8.30, a few hours sleep and then off to training. However when I am on days, I am up around 6am, head to work for a ten hour shift; leave the station around 5.30ish; head to Newbridge for training returning home just before 11, so that can be tiresome at times but sure at the end of the day it is worth it.”

Looking forward to Saturday's clash with his former boss Kieran McGeeney and Armagh, the Naas man admits that while a lot of people will be looking at the game and The Geezer connection he feels that that is totally  irrelevant.

“To most of our group of players that connection is not an issue; not a factor; we will be concentrating on the game and nothing else; we will be preparing as we always do, anything outside of that is not our business.”

The fact that Kildare have a very exciting 'bench' is touched on by Callaghan, especially as he says after the loss they  suffered with Eoin Doyle's injury.

“Eoin Doyle's injury was a big blow to us; he is our captain; our leader and a massive player and has been all year; we were lucky to have him for 55 minutes (against Dublin)  the way he conducted himself during the game against Dublin with a broken thumb; went against all medical advice and opinion; he was told he would have the operation on the Monday then on the Wednesday but declined them all; it really shows what he is made of and how much commitment he has for the team.

“When you see lads missing training or not playing due to little niggles then you see what Eoin brings to the table; it is massive and he will be a massive loss to us on Saturday, but on the other hand we have a very strong panel; an excellent panel with some very experienced players along with lads that have a big future ahead of them.”

And how does the man who has seen it all since he was first involved in 2002 see Saturday's game panning out?

“Armagh will be very tough; they have had three games in the Qualifiers that will undoubtedly stand to them; they tick a lot of boxes;  have some very dangerous forwards but having said that we are  in tip-top shape; the Leinster final will certainly stand  to us; if we play to our full potential, and I mean play for the full seventy minutes plus,  we won't be too far away; we won't be too far away at all, and that's for sure”!