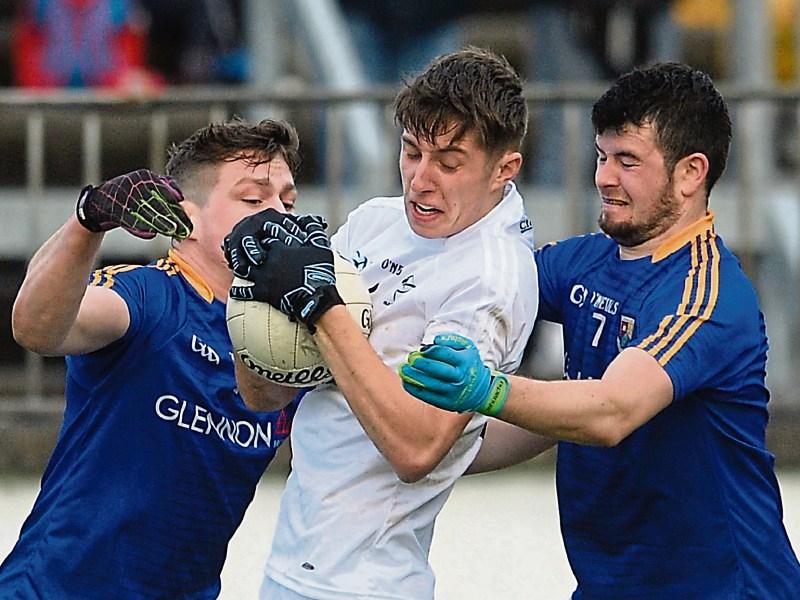 There are few lads out there, who at the age of  20, have two SFC and one MFC medals in their back pocket; led their county team to Leinster minor success, before going on to captain his county at U21 level.

And it doesn’t stop there.

After being called into his county’s senior squad this season by Cian O’Neill, gets game time in the O’Byrne Cup before making his Allianz Football League debut.

All that while commenc-ing 3rd level studies at DCU,  picking up a Fresher’s medal in the process.

It has certainly been a hectic few years for a lad who has just finished his first year in college, a year he says that he has been very fortunate both at his club, college and county level.

“Last season with Sarsfields we had a a few lads injured and Sean Campbell was unavailable, I was given my chance in the senior championship and everything seemed to take off from there.”

Shea ended up retaining his place; lining out in the county final at full back (defeating town rivals Moorefield in the final) and  selected as Man of the Match that day.

“After that I got a phone call from Cian (O’Neill) I was delighted to join the senior panel.”

So how did you feel when you linked up with the senior squad initially, was it a bit daunting, ever overwhelming”?

“To be truthful the fact that a group of us came in together definitely made it a lot easier for me and coming in with Sarsfields lads Conor Hartley, Con Kavanagh and Ben McCormack was massive but the more experienced lads that have been there for some time were all very welcoming, they had all been through it before so the transition was fairly seamless.”

So who has been the biggest influence on this budding star’s football career?

“No doubt” came the instant reply “Pádraig Brennan, huge influence, he took us when we were 13-years-of-age with Sarsfields and then all the way up through minor and beyond, and he was in with Kildare last year so he has been with me all the way up and is someone I have huge respect for; I improved leaps and bounds under him.”

Shea admits that, initially at least, it was tough going linking up with the senior squad.

“At the start it was tough; physically; when I came into the O’Byrne Cup and then the Allianz League the physicality plus the pace of the game, were the main difference to what I had experienced prior to that.

“The pace of the game from minor to U21 is big but the step up to senior is massive but you find your fitness improves tenfold.

“Sometimes at club senior championship you might have two or three seconds longer on the ball which disappears at county level; that may not seem a lot but when you are in possession it is actually massive; you have to be quick thinking; be decisive; make your decision, stick with it and go with it.”

“The improvements I feel l have made under Roli (Sweeney), Enda (Murphy) and of course Cian is brilliant; just what these lads bring to training; their intelligence of the game is massive.”

These lads have so much experience and they have given so much to Kildare football, adds Ryan, but it’s massive, they’re passing their knowledge and their experience on to us; it’s really brilliant to be in there with them; every single day we are learning and improving and it really is something very special.”

There is one part of management that Cian O’Neill admitted is far from pleasant and enjoyable and that is when it comes to championship match day panels.

“It is far from pleasant” the manager told us one day after a championship game.

And how does Shea Ryan feel when told that he was not part of the match day panel against either Laois or Meath?

“Really you just have to be patient” is his instant reply; adding “it’s really like an apprenticeship.

“Obviously when you play with underage teams you have players leaving and then you get your chance to fit in, but when it comes to senior level it is different; to get in you have to take someone else’s spot; you have to more or less push another player out, so that’s the big thing; it is someone’s spot you have to take rather than it been given to you; so you just have to bide your time; you're trying to improve with every training session; trying to impress every night and then hoping you get the management team’s nod and get the call for the next game, but yes, you certainly have to be patient.”

So overall have you enjoyed the experience in this your first season at senior inter-county level.

“Very much so, I was pleased when I got the call initially; I feel I am becoming a better footballer; I enjoy being around with the senior lads; I have made a lot of friends in a short time and I really enjoy being at every training session.”

As Shea says himself, a young player, especially one in his initial season, has to be patient; many lads are forced to wait for a lot more than one season, but no doubt the trick is to be ready, be prepared and when that call eventually comes, take it with both hands and make the most of it.

Have no doubt when that call comes for Shea Ryan to step up he will be ready and willing because he is more.