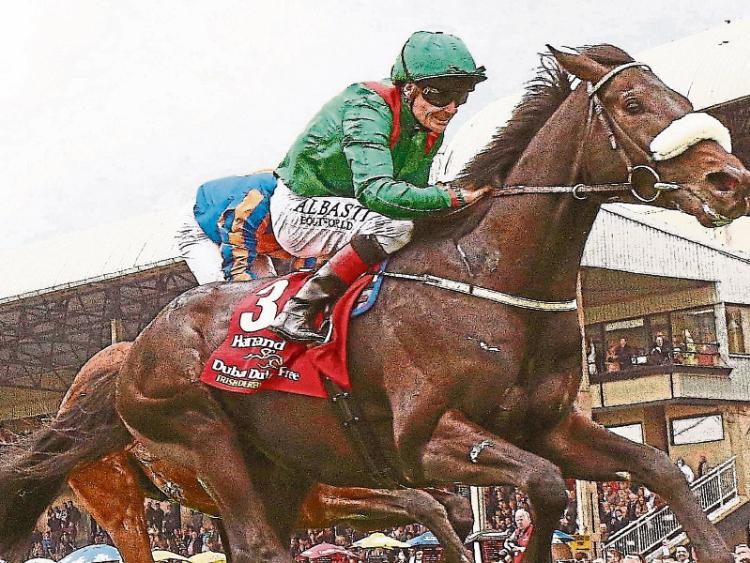 Pat Smullen winning the Irish Derby on Harzand in 2016

The sold out Dubai Duty Free Irish Derby takes centre stage on the racing scene this weekend as tens of thousands of people converge on the Curragh to witness one of Ireland's most famous races. As well as the big race at 5.20pm on Saturday, the Kildare track is hosting an array of quality racing over three days. Our racing columnist has analysed the cards to find the best bets of the weekend.

A small field goes to post for the 14:35 race on Saturday's card where a couple of veterans like GORDON LORD BYRON get an opportunity to recapture past glories. However, I'm ignoring the highly rated nine-year-old in favour of an improving four-year-old, ONLY MINE (5/2). She was second behind GORDON LORD BYRON in the Greenlands Stakes at this track in May, carrying just three pounds less than the winner on that occasion. On Saturday, she will carry 12 pounds less than the same rival, giving her a huge shout on yielding to good ground. She followed that performance with another cracking run to be second in the Ballyogan Stakes, again at this track, on June 11. This filly hasn't won since May 2016, but that was against WASHINGTON DC, and most of her runs since have been credible. PETICOATGOVERNMENT is the other young gun in the field and is capable of recovering from a sixth placed finish last time out.

The 16:40 race, the warm up for the Derby at 17:20, is an intriguing contest with a number of relatively unknown propositions in the line-up. Quite a few of these have just two or three runs, making it difficult to assess the extent of their form. However, Richard Hannon has brought DE BRUYNE HORSE (7/1) over the Irish Sea and he can pose a major threat in this race under the experienced ride of Pat Smullen. He was fifth on debut at Newmarket in May, but came on from that and won his next two starts, including a seven-length success over WAY OF WISDOM at Ripon. His other victory came at Epsom in early June when he had two lengths to spare over Mark Johnston's CARDSHIP, form that looks particularly strong given the fact CARDSHIP won subsequently and came third behind SIOUX NATION in the Norfolk Stakes at Royal Ascot. DE BRUYNE HORSE was almost three lengths behind RAJASINGHE in the Coventry at the Royal meeting, but can recover here on ground he should appreciate.

The Dubai Duty Free Irish Derby is next up and goes off at 17:20 on Saturday evening with a field of nine. The first and third from the Epsom Derby reappear with the connections of WINGS OF EAGLES hoping he can do what Pat Smullen and Harzand did in 2016 and win both the Epsom and Irish Derby. WINGS OF EAGLES was given an expert ride in the Epsom race by Padraig Beggy and sprung a huge shock by winning at odds of 40/1. Aidan O'Brien has now drafted in Ryan Moore to take over the steering in the hope that the horse can back up that upset performance. John Gosden's CRACKSMAN (3/1) went off as the 7/2 favourite in Epsom and is once again prominent in the market here. The injured Frankie Dettori has been replaced by Pat Smullen, the Irish champion jockey - not a bad stand-in to have at all. I think CRACKSMAN can produce the goods here and reverse form with WINGS OF EAGLES. The way the race was run in Epsom suited horses coming from the back, and CRACKSMAN had gone out very prominently, leaving himself vulnerable to closers. Gosden will have rectified that now and if any jockey has the patience to produce him at the right time, it is Smullen. It's hard to pick fault with the French raider, WALDGEIST, who is being backed, but I think this race is set up for a WINGS OF EAGLES/CRACKSMAN rematch.

To me, ZHUKOVA (6/4) is a class apart in the 16:20 race on Sunday's card, although a few of her rivals are being backed in the market. The most prominent is JOURNEY who had won three on the spin before finishing fifth behind HIGHLAND REEL in the Coronation Cup at Epsom in early June. John Gosden has enough faith in her to bring her over, but he's meeting a good one in ZHUKOVA for the formidable Weld/Smullen combination. She's won seven of her ten starts and her only real blip recently was a poor performance at Ascot last October. Coincidentally, JOURNEY won that race and Weld's charge was fully 15 lengths in arrears. She tended to hang right that day, hampering her chances, and in the grand scheme of things, it is obvious to see that run was too bad to be true. I'm happy to put a line through it as she has won twice subsequently, including at the Man o' War Stakes in the US in May. In her career to date, she's seen off the likes of US Army Ranger and Success Days. She can continue winning ways here at the expense of the likes of JOURNEY and LAGANORE, who could fill the places.