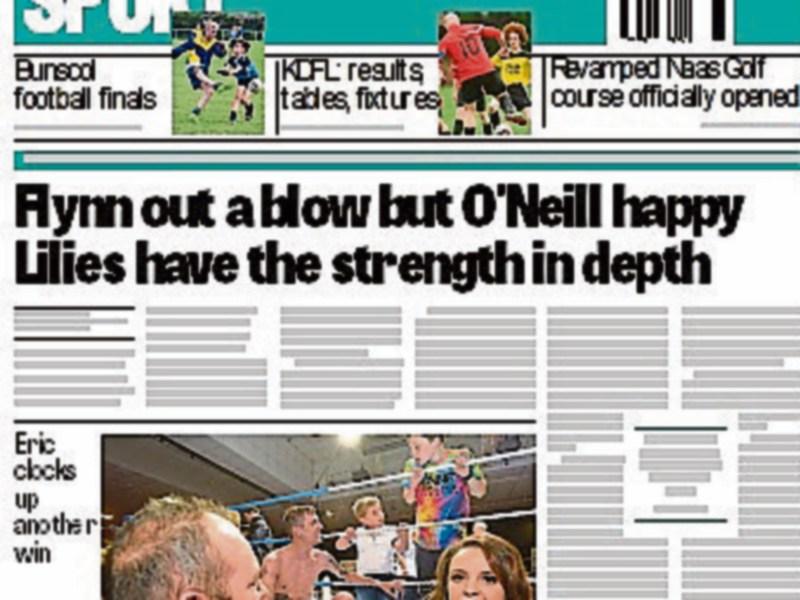 Neil Flynn ruled out for Sunday’s Leinster SFC quarter final with Laois, but manager O’Neill happy Lilies have the strength in depth to advance.

Lilies need to be vigilant against Neighbours (Tommy Callaghan).

‘This is what it’s all about, the championship’ Fergal Conway in conversation.

Mixed news from the Kildare Camp as Kildare operate a 35 man panel.

SFL: big wins for Moorefield, Naas, Sarsfields, plus all the results, fixtures and up-to-date Tables

In the Tom Cross JFC Caragh make it two-from-two while Ballykelly and Cappagh draw.

Kildare Juniors lose out to Meath as Padraig Fogarty scores 1-12.

Plus all the results from the Fairways and Gavin Lunny’s weekly golf tip.

Racing Affairs: What this year’s Epsom derby winner has to do in the long run (Robert Catterson)

Three packed pages from the KDFL as Kildare Town tops in a ten goal thriller against Newbridge Hotspurs; Foley’s cracking opener sets up Athy win; plus Focus on the CR Wynne Senior Division, along with the Team of the Week.

All that and much, much more in this week’s Leinster Leader Sport … in the shops now.