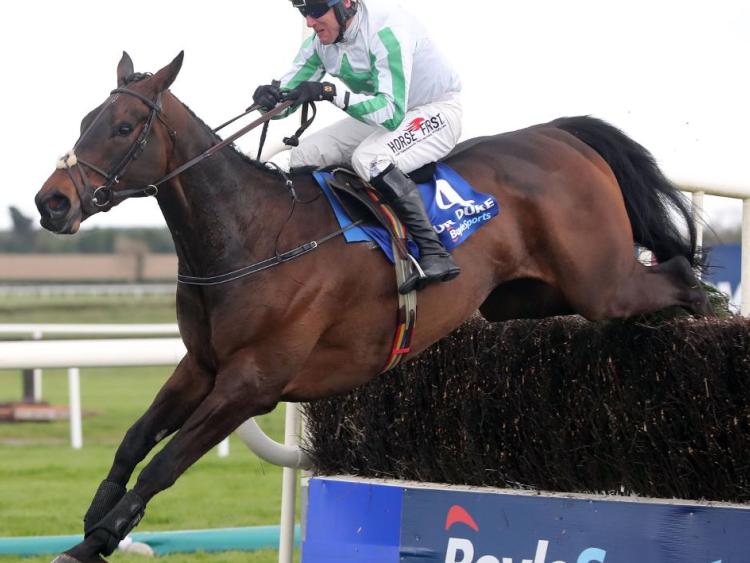 It's a mammoth task to find the winner here as 25 go to post for Wednesday's curtain raiser. CLOSE SHAVE (7/1) is the most likely favourite, and that tag is largely down to connections. Jessica Harrington is the trainer and she has her string in serious form this term, picking up a host of big prizes, including the Cheltenham Gold Cup and Irish Grand National. CLOSE SHAVE won its most recent start, beating TRAVERTINE at Fairyhouse earlier this month. Before that he was a good fourth behind BILBO BAGINS carrying plenty of weight, and so should be competitive. DAWERANN will also popular with Gordon Elliott's name beside it on the card, while CROSSED MY MIND won his latest start having previously finished fourth to MELON at Leopardstown in January. I would take a risk with the experienced BEN DUNDEE (12/1) at a nice each-way price. He carried a big weight when fourth behind LITTLE MITCH at Wexford earlier this month, and before that was a brilliant second to RUNFORDAVE at Clonmel. That one is a good yardstick, having placed at both Cheltenham and Leopardstown recently. BEN DUNDEE has been saddled with 11st 9lbs here but the booking of a four-pound claimer will help his cause and he's consistent enough to make his presence felt.

This is another race at the festival being slated as a match between the top trainers, Mullins and Elliott. They are likely to have both market leaders - BATTLEFORD for Willie, and MINELLA TILL DAWN for Gordon. I am going to oppose them both in favour of Noel Meade's BURGAS (12/1), ridden by Bryan Cooper. BATTLEFORD ran at Cheltenham, and was massively disappointing, while MINELLA TILL DAWN fell on his latest outing at Fairyhouse in early April. BURGAS has had a nice run into this race, and finished third at this festival on the same ground last year. That was behind CUP FINAL in a handicap hurdle over three miles, but he can run well over this shorter trip. He followed that Punchestown run with a good second behind YORKHILL at Fairyhouse in December on his seasonal re-appearance over just two miles. He found things tough when 14 lengths behind CONDUCT YOURSELF last time out, but he was carrying a full 14 pounds more than the winner that day, so can be forgiven for appearing a little below par. If BATTLEFORD and MINELLA TILL DAWN show anything like their most recent form, Noel Meade's runner can certainly take advantage with a top jockey on board.

Three Cheltenham winners line up here in the shape of PENHILL (5/2), PRESENTING PERCY (11/4) and CHAMPAGNE CLASSIC (12/1). The latter perhaps has the most to find after scoring in the Martin Pipe, while PRESENTING PERCY also takes a step up in class. PENHILL beat the re-opposing MONALEE (3/1) into second in the Albert Bartlett last month, and it could be a rematch of sorts between those two. PENHILL was a relative shock winner of that race, despite being trained by Willie Mullins, and I think MONALEE can reverse the form. The slight ease in the ground compared to Cheltenham will suit Henry de Bromhead's charge, and he has been admirably consistent this term. He's been first or second in seven career starts to date, and just seems to always give his running. Ruby Walsh takes over from Paul Townend on PENHILL, and he did cut a rejuvenated figure at Prestbury Park, so could still hold form with MONALEE. However, conditions are more favourable this time for the selection around and I think he will get the job done at 3/1.

SIZING JOHN (10/11) is expected to follow up his Cheltenham Gold Cup success with a win here, but 2015 Cheltenham hero CONEYGREE (9/2) is back to try an take over as the best staying chaser in the game once more. He became the first novice to win the Cheltenham Gold Cup in 41 years two years ago, but has been hampered by injury since. He came back in November and finished 15 lengths behind CUE CARD, who has disappointed since in big races. DJAKADAM is an admirable horse, who has twice been a runner-up in the Cheltenham showpiece, and was a close-up fourth this year. He'd prefer a little more cut in the ground and may once more be bowing to a couple here. SIZING JOHN is the deserved favourite, but a risk is taken on OUTLANDER (9/1). He was certainly not himself when more than fifty lengths behind Jessica Harrington's star at Cheltenham, but before that he was in good heart. He won the Lexus Chase over Christmas on similar ground, beating the likes of DON POLI and DKAJADAM. He is high-class and could well do better in big races. It's hard to see SIZING JOHN being beaten, but he is not invincible and OUTLANDER can spring the upset at 9/1.

This looks a good chance for Gordon Elliott to continue winning ways with Cheltenham scorer FAYONAGH (2/1), who is unbeaten in three starts. He won the Champion Bumper last month in good style as the re-opposing CARTER MCKAY folded and drifted into the field. However, SOMEDAY (7/2) was prominent in the betting for the same race before being withdrawn. Trained by Jessica Harrington, this one followed a good second on debut with a classy win at Leopardstown in February. SOMEDAY (7/2) will come here fresher than his main rivals, and even though CARTER MCKAY cannot be as bad as the last day, I think Jessica Harrington could be in the winner's enclosure again.

A host of them have claims in this but Gordon Elliott is a shrewd operator in handicaps and could have the answer to the puzzle with RIGHTDOWNTHEMIDDLE (5/1). He was just four lengths down on A TOI PHIL on good ground in January, and has been second in three starts since. His latest effort at Aintree saw him come home second, 13 lengths behind SIZING CODELCO. That is good form and again came on good ground. He should enjoy the ground at Punchestown this week and carrying a nice low weight with Jack Kennedy on his back, he can go one better than Aintree. POLIDAM (5/1) is also very prominent in the market for Willie Mullins, but is having his first run in Ireland since coming over from France. He may just need time to settle into his surroundings, but could well be above average. IRISH CAVALIER (7/1) is an admirable animal who has plied his trade at a loftier level than this, but he's been on the road a long time and carries plenty of weight, so could be vulnerable.

Another tricky contest but in this case it may pay to stick with the current favourite, MINUTESTOMIDNIGHT (3/1). He won a point-to-point in March and followed that earlier this month with an emphatic victory over the re-opposing HALF THE ODDS. The selection looked a class apart, slamming rivals by 12 lengths at his ease. Jamie Codd takes the ride and he will be a popular choice for punters at the Kildare track. Others to consider are MYSTIC THEATRE (9/2) who is admirably consistent and BLUEGRASS PRINCESS (4/1) who beat MYSTIC THEATRE by 11 lengths the last time they met. There are a couple of newcomers too, including THE PRINCETONIAN for the high-profile Jessica Harrington yard, but there was was a lot to like about MINUTESTOMIDNIGHT at Wexford and we're sticking with him.