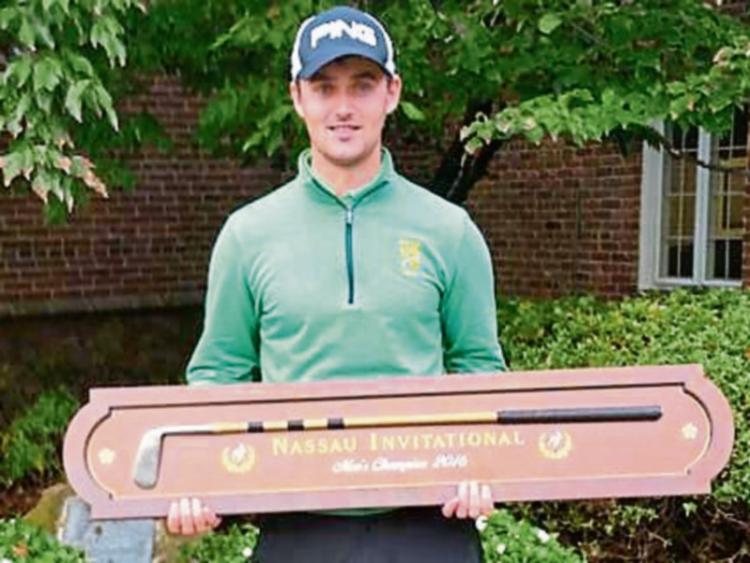 It’s been a big week for two young Naas golfers.

Jack Hume, one of the top amateur golfers in the world, finally crossed over to the professional ranks when teeing it up last week in the Alfred Dunhill Links in Scotland and while Hume just missed the cut, no doubt we will be hearing a lot more of his exploits in the weeks and months ahead.

Meanwhile Conor O’Rourke, a clubman of Hume, clinched a major victory with a birdie on the 18th to win the Nassau Invitational in New York.

Leading qualifier with a one-under 69 at Nassau Country Club, Naas star O’Rourke cruised into the final after three convincing wins in the match play stages but he was taken all the way in the decider. His victory was only confirmed when he birdied the 18th from six feet to seal a one-hole win against Steve Zychowski.

“It feels really, really good to win a second tournament,” said O’Rourke, who captured his maiden championship title at the St Andrews Links Trophy in June.

“Winning St Andrews was amazing but it’s really sweet to back it up with another big win,” he added and by winning at Nassau, the 25-year-old emulated his Naas clubmate Jack Hume who became the fourth Irish winner of the event in 2014 along with Paul Culter (2009), Niall Kearney (2007) and Darren Crowe (2004) on Nassau’s illustrious roll of honour.