The changing of the guard 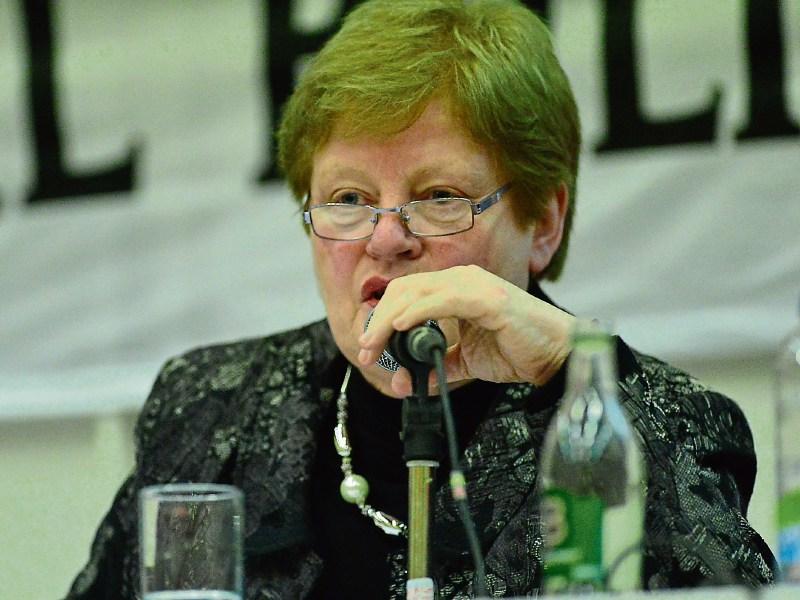 It has been a dozen years since Kathleen O'Neill took on the role of secretary of Kildare Co. Board, the first five as a volunteer; the next seven as a full time employee.

It has certainly been an extremely busy and at times turbulent dozen years; a time when off the field Kildare's finances were dominating and hitting the national headlines for all the wrong reasons; while on the field of play, during the McGeeney era in particular, rarely were Kildare out of the sporting news.

A club delegate to the county board the Rathcoffey member first ran for office (unsuccessfully) for the position of County PRO, Syl Merrins getting the job.

However just 12 months later a decision from Croke Park saw the position of Development and Games officer broken up into two separate positions and Kathleen was elected the first Development Officer in the county.

“I was in that post for some two years and it was a great time to be involved in club development as there was no shortage of funding, the Celtic Tiger was roaring and, of course the Minister for Finance was Charlie McCreevy and he was a great asset,” Kathleen explains from her office in Hawkfield Centre of Excellence.

When Syl Merrins moved to the position of vice chairman Kathleen went for, and was elected, the County PRO — a position she emphaises is vastly different today that what she inherited in 2003.

“I remember writing match reports on a Sunday night and faxing them to the local papers, something that took up a vast amount of time and effort but that was the way of the world at that time.”

Kathleen was, as one would expect, a diligent, very diligent, competent and reliable PRO and rarely, if ever, missed a deadline.

Two years into that job and there was another major development in Kildare when County Secretary, Richie Whelan, resigned. and as Kathleen says herself “I probably fell into the secretaryship at that stage; I covered that role for six or eight weeks and then at the following convention went forward for the job.”

It was a turbulent time, there was a big divide in the county; the convention was held in St Kevin’s and Richie Whelan decided he would stand again for secretary.

That vote ended with both candidates receiving the same number of votes and a recount was called for as there were four or five spoilt votes. Kathleen O’Neill was elected after the recount.

Re-elected each of the following five years she was due to step down in 2009. However that was the era when Croke Park began to push for full time county secretaries, again Kathleen explains: “I was unsure if I wanted to go for the full time role; there was not a great deal of interest in the post at the time but I eventually decided to go for it and was appointed on a seven year contract which expires on July 1, just a few weeks away.”

One of the first assignments given to the new secretary, at the insistence of Croke Park, was to turn every club over to e-mail.

“At that point of time all correspondence, fixtures, suspensions, everything, was going out on hard copy through the post and Croke Park insisted all that had to change.

“When you look back at that now it might not seem a big deal but at the time it was absolutely huge; no more post, all notices, fixtures, every-thing had to change over to email.”

There was one problem early on in the process when one club insisted they had not received notification of a fixture and refused to accept a ruling as such and were heading to the DRA (Disputes Resolution Authority) but “on the steps of the court withdrew their complaint.”

Kathleen insists that she would have liked to have seen it go the whole way as “we would have got a definitive ruling but since then it was written into the rule book that e-mail was the acceptable, and only, form of notification for all correspondence between the board and the clubs.”

In her 12 years as secretary, both voluntary and full time, Kathleen has worked alongside no less than five chairmen. Initially Andrew O'Sullivan, then Syl Merrins, Padraig Ashe, John McMahon and today Ger Donnelly.

Back in her time as voluntary secretary Kildare Co. Board did employ a part time administrative secretary, who looked after ticketing and accounts but then as said previously Croke Park went down the road of employing full time people who would take charge of the ticketing, the accounts and the day-to-day running of the county board.

Now, however those in authority have reversed that decision and while a new Honorary Secretary has been elected a new full time person is presently being put in place with a title of 'Head of Operations.'

“I don’t know” says the retiring secretary, “ the jury is still out on this one; my big fear is the demarcation line, what’s going to be defined as the duties of the voluntary secretary compared to the new post of Head of Operations and if there is an overlap how do you manage it.”

Applications for that new position closed last week with 42 applications received; the task of appointing a suitably qualified person is now firmly under way.

Kathleen O'Neill insists that when she came into the job she was well aware there was going to be financial problems, not just in Kildare but in many counties throughout the entire country but unlike other counties who had capital debt only Kildare was different in that it had both capital and day-to-day debt.

“It was a very, very stressful time” she admits, adding “Croke Park took a very pro-active role in our financial affairs appointing their own person to oversee us; they have done the same in other counties but we were probably the very first county to experience such problems and that is probably why it became very high profile.

It took Croke Park a long while to figure out how they were going to tackle the problem, what they were going to put in place, while also fully aware that whatever they came up with for Kildare would be used as a template for other counties who had similar problems coming down the line, said Kathleen, adding “ but through a lot of hard work and long hours things have improved enormously and we are now back running and in control of our own affairs.”

On the future of St Conleth’s Park, the county secretary is quick to point out that there are plans in place but “look I think that until such time as our two major debts, both current and capital are gone which is going to take another few years, unless someone comes in with a lot of money or we win the lotto ... remember we are paying €200,000 a year to the banks, you could do an awful lot with that kind of money if it could be diverted elsewhere ...”

“The Hawkfield loan still has about eight years remaining on it and while Dermot Reilly had other ideas how to deal with that but I simply don’t know but as I said unless we get a major benefactor or win the Lotto ...”

Having been in the position for the past 12 years, Kathleen admits that she enjoys her role on the line on big match days.

“It is a very demanding role, much more so than most people would realise as you have to be one hundred per cent tuned in, not alone Kildare's subs, blood subs, yellow cards, black cards etc, but also your opponents and you really have to put all bias aside and just concentrate on the job.”

Will you miss it?

“I will miss the people more than the job; I will miss meeting people collecting their tickets; calling to the house, discussing the game and all that that entails but as long as people say I was fair in my dealings with them at all times, I don't really care after that.”