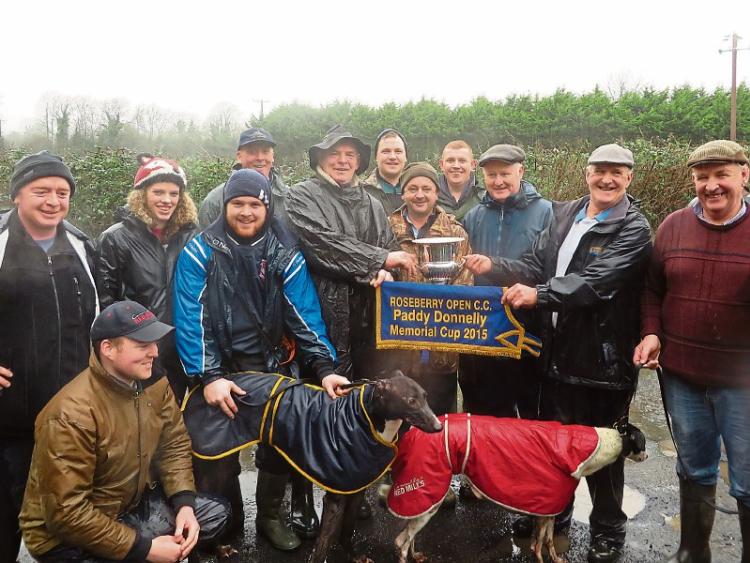 Following the recent rainy spell open coursing enthusiasts gathered in Roseberry on St Stephens morning well kitted out for the day that lay ahead.

Due to a plentiful supply of stock all were on the way home by 12.15 hrs after what was one of the best days hunting that this club has produced in recent years.

Both these tired dogs were slipped behind a stag of a hare in the final but went unsighted, before their handlers could catch them they latched on to a fresh hare that gave them both a right dusting in the far end of Farrell's field. Judge Eugene Doyle correctly took off the cap to signal an undecided . Both owners then sportingly called a divide.

The minor stake on the card the Friends of Roseberry Cup sponsored by Fern Boarding Kennels ended up going across the Wicklow border as the Catherine and James Walshe owned Imaallamborghini accounted for Lorry Driver in the final.

In the opening course that were sent on their way by Slipper John Doogue at 10.35 White Toast just led Lobnamna Boo by a tight length with a slight touch of favour. Driving in for the first the Toast ended up on her side allowing Lobnamna in for two quick scores.

Once regaining her composure White Toast jealously took possession of the hare and after 34s puss made cover heading towards the Higgins household.

Imaal Paws burst quickly from slips to gain a two length advantage over Lighting Queen into turn one. In the hunt that followed they mixed it pretty evenly for six turns before puss bade them goodbye on 35s.

Big Breakfast raced unsighted out of slips as Bigwood Lady powered to the opening points. With the Breakfast getting back in play after a further score to the Lady they both tightly worked this puss all the way to the bottom ditch. With puss exiting the field after 48s both these ladies were glad to see the back of her.

In a very tight buckle little separated Renville Cross and Watch Out Sands on the run up. Showing slightly more determination Renville drove the opening points by half a length.

As this stag of a hare made for the bottom of the field Renville began to outscore her rival and on 35s she had enough done once puss slipped out towards Morrissey's yard.

Annabels Buddy was the form dog in this cup and once released he opened up a three length advantage over Carlsbush Kate to the opening turn. Sticking close to this hares tail he hunted very strong for 35s before getting the slip down in the rushes.

Hardonthefluids used his experience to prove four lengths the wiser over Curious Kate to the first score in this course. Taking the next two turns also he had this hunt well in the bag before Kate got her first score. Once puss left the field after 30s Hardonthefluids easily advanced to the next round.

Lobnamna Maria set the early fractions in this course only for Brosna Ranger to take her hindquarters as this stag of a hare shifted on the run up. With Maria on the ground the Ranger scored twice before the unlucky Maria rejoined as puss slipped out under the wire as both dogs were caught on 12s.

Enough is Enough raced out in front as Last Stage went unsighted, however the leader failed to sight once puss dived right through the wire fence. Luckily or unluckily as it transpired Last Stage sighted in the adjoining field and this strong puss gave her a tour of it before skipping out after 49s with Last Stage still in pursuit in what was the final course off the opening beat.

Once set up again out across the bridge came the next hare to stride straight up the hill with White Toast leading Imaal Paws by a length and a half. This hare then doubled back down the field and staying close to the ditch she proceeded to give both ladies plenty to do in some tight wrenching. Heading out the back of the beat after 34s White Toast deservingly advanced to the semi final.

Renville Cross lead a tired Bigwood Lady up the hill to score the first two points. From here Renville gave an exhibition of close quarter hunting with the Lady also doing her fair share. This course was a pleasure to witness and just on 40s puss was last seen heading off towards Farrell's laneway.

Annabels Buddy scored first against Hardonthefluids as a racing puss went towards the top of the hill. Fluids then gat in for one before Buddy drove hard into turn three to fleck the prey. Once realising what was in her slipstream this hare put on the afterburners and was last seen heading towards the opening beat on 38s.

The final semi finalist came as Brosna Ranger easily lead a very tired Last Stage into turn one. This hare then doubled back down the field and following a few more turns and tumbles on 41s she was last seen heading back across the bridge where she entered the field.

White Toast appeared the fresher in the opening semi final to lead Renville Cross to the opening score. As puss went towards the side ditch she gave them enough to worry about before slipping out after 16s. However deciding she had more to give she remerged with both hounds in tow before heading out the same ditch after another 8s.

Brosna Ranger advanced to the final to lead the slightly unsighted Annabels Buddy by three to the top of the hill. Following two more turns puss took the easy option and slipped out under a gate after 20s.

Imaallamborghini with the advantage of a few hunts up Old Kilcullen was first to sight her quarry once released by John Doogue. Coming on the outside line on the run up the hill she took the opening score by two lengths. This hare then made towards McIntyre's ditch and once being used again twice she bade goodbye to both hounds on 22s.

Lorry Driver enjoyed a solo bye in this hunt and by god did he get enough to do by himself. The opening turn took place up the top of the hill and following at least two more turns and several wrenches he was last seen down at the bottom ditch still in tow after 38s.

The final course over the Roseberry preserves for 2015 we witnessed Imaallamborghini easily take the first three scores over a very tired Lorry Driver. As Lorry Driver gamely got back in for a turn Imaallamborghini was last seen still on her tail as judge Eugene Doyle emerged with the red flag flying.

Another successful meeting over in record time for this small club, following the presentations all beaters, landowners, club members, sponsors and officials were thanked for their continued effort in keeping the proud Roseberry tradition alive. A pleasant evening was then enjoyed in the local county champion's clubhouse. Roll on next year.