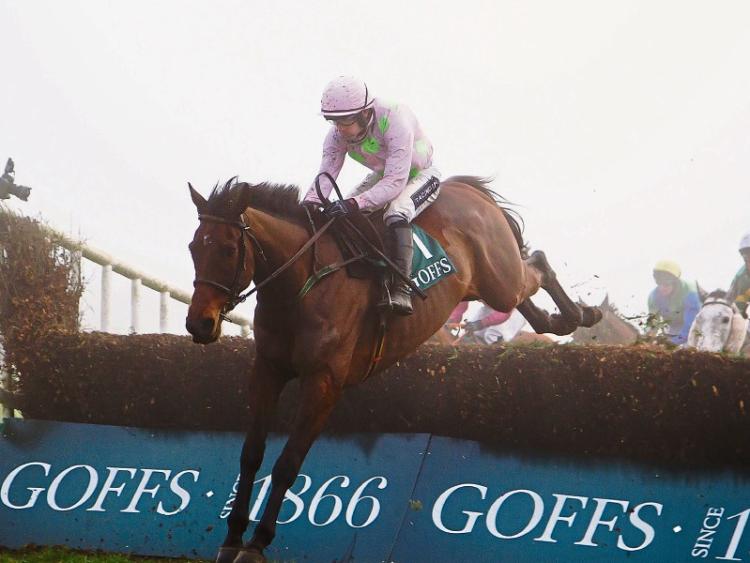 Plenty of big names made their mark in 2015. Gleneagles and Golden Horn dominated their divisions on the Flat while it was all about Willie Mullins when it came to the jumps.

Faugheen showed just what a champion he is while Vautour, Un De Sceaux and Douvan all gave impressions of major money spinners in the years to come. But it’s the future which matters most. So let’s highlight five names to follow in the coming months.

There’s not many better sights in National Hunt racing than Nina Carberry strutting her stuff in the JP McManus silks over the banks at Prestbury Park. We’ve been lucky enough to see that twice already this season and with her new partner in crime Josies Orders, we’re likely to see it many more times.

Having been partnered first in a point-to-point by JT McNamara at Dromahane in April of 2012, Josies Orders spent the first three seasons of his career in the care of Jonjo O’Neill. It wasn’t until last season’s Punchestown festival when we took real notice of the eight-year-old for the first time. And in the space of just nine months, he’s already becoming a household name. His two victories at Cheltenham in November and December have sparked memories of the great Spot Thedifference and come March, don’t be surprised if Nina is punching the air on this latest Enda Bolger banks specialist.

When the introduction of the new Dawn Run Mares Novice Hurdle at the Cheltenham festival materialised, one person immediately sprung to mind. Willie Mullins. Son of the man who trained the great Dawn Run, Mullins junior has already become a trainer renowned at producing some remarkable mares. Quevega to name just one. And in Myska, he could very well have another special female in his ranks. Unbeaten in her three starts so far, the daughter of Presenting was already highly regarded prior to winning her seasonal reappearance at Thurles. And that was before she travelled across the Irish sea last week to blow away her rivals in a Listed mares novice hurdle in near unraceable conditions.

Sporting the silks of Supreme Horse Racing, Myska is now being geared towards a crack at the Cheltenham festival’s newest race. An outing at Fairyhouse later in the month may be on the cards before a trip to the Cotswolds awaits.

And given that her current main market rival Limini, also trained by Willie Mullins, hasn’t been seen since last May, Myska already appears to be the Closutton number one hope.

Irish-trained horses have a superb record of late in the RSA Chase, winning five of the last seven renewals. And there’s every chance that No More Heroes will be sent off favourite on March 15th to enhance that sequence.

Gordon Elliott’s seven-year-old has been near foot perfect since embarking on his chasing career.

A winner of all three starts so far over fences, his win in last week’s Grade 1 novice chase impressed everybody.

Racing over an extended 3m at Cheltenham will be a different game, as well as taking on More Of That. Regardless he’s sure to be a staying chaser to take high rank in the seasons to come.

The task of nominating Willie Mullins’ top novice hurdler this season is harder than probably ever before. Most will point to Min, which is already the moral winner of the Supreme Novices’ Hurdle. Others will say Bellshill on the back of three impressive wins over timber.

There’s also Up For Review, his main Albert Bartlett hope at this stage. And others will side with Yorkhill, which I tend to agree with. Unbeaten in all starts under rules, he was particularly impressive in winning Saturday’s Tolworth Hurdle. To me, he’s already looked like a Neptune Investments Novices’ Hurdle horse and the presence of Min in the Tuesday showpiece will surely sway his connections to targeting Wednesday’s feature.

Don’t be surprised if he locked horns with Bellshill in the 2m5f race and even if that were to happen, it would be Yorkhill all day long for me.

Hardly an original choice but with the presence of Don Cossack, Don Poli and Vautour in the Cheltenham Gold Cup picture, it’s still far from easy to identify this year’s blue riband winner.

To me, Djakadam was the forgotten horse from last season heading into this winter and was perhaps overshadowed by his stable companions despite doing very little wrong.

But he’s quickly becoming the talking horse in the Cheltenham Gold Cup and 12 months after finishing runner-up as a six-year-old, he’s primed to give Willie Mullins his first and overdue winner in jump racing’s biggest race