Remembering Euros past: The Leader goes to Stuttgart 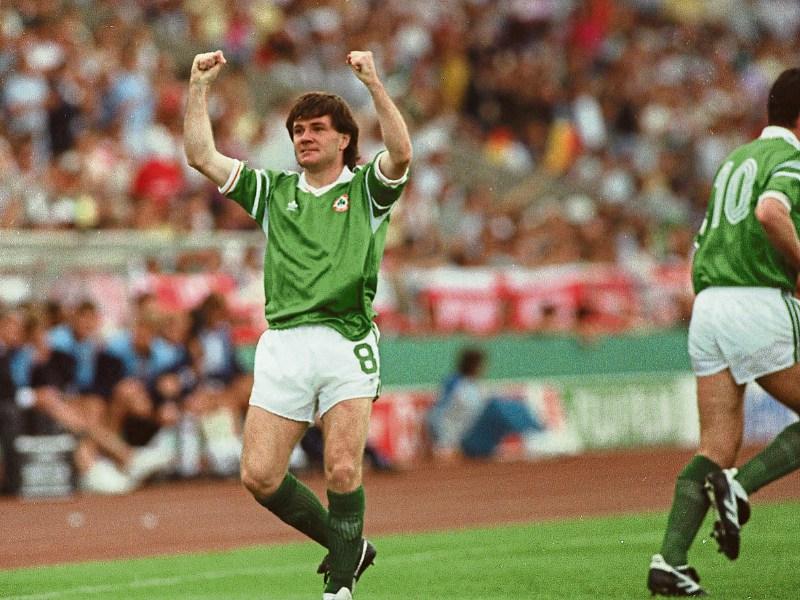 Ray Houghton celebrates after heading Ireland into the lead against England

History telling has a habit of splitting the facts.

But it is safe to say that my experience of the European Championships in 1988 was shared by many.

I, along with thousands of others, headed for Germany in the hot summer of '88.

I always considered 1988, particularly the English game, as the pinnacle of our soccer glory.

While I had spent a lot of time in Germany, I had not gone to many of their football matches. It was an eye-opener seeing stadiums where the gates opened letting everyone out very quickly to board trams.

It was a contrast to the narrow lanes of Dalymount Park or even Lansdowe Road, where as a teenager I recall not being able to feel the ground with my feet following an international match exit.

In recent times I have wondered if the English win gave us a false sense of security leading to the eventual collapse of the Celtic Tiger. Perhaps not.

A good memory was meeting Jimmy Magee in the press area. I appreciated his chat. I am sure he had so many big names to talk to.

And I am delighted to have had an opportunity to thank him for that time recently when he spoke about his life at the Moat Theatre.

I have asked myself, had I missed something from 1988 in my thoughts.

Was it because I was actually there?

I had worried about packed transport and expensive food and drink.

But it did not turn out that way.

I have an old school friend who lives in Cologne - it’s a second city for me due to frequent trips. I based myself there while travelling between the venues.

The trains were not too packed with the Irish. Just enough to savour the atmosphere.

I received a press pass on the basis of working for the Leinster Leader, and I sent back plenty of copy for the weekly editions.

Looking back, it is not just me who feels the English win was pivotal in recent Irish soccer history.

In his biography, Packie Bonner said he felt that the England game in Stuttgart was the start of the era.

I am happy to believe the Donegal goalkeeper.

As it turns out I was sitting in a seat almost directly behind the late Con Houlihan when Ray Houghton scored the goal early in the English game.

Con jumped up — he was a huge man — and I could see nothing until he was ready to sit down.

Such was being the disadvantage of being at the game, unable to look at the replays on television.

We were under siege for the rest of the game. It was one of Packie Bonner’s greatest hours.

Doing only a couple of features for the Leader, I had time to answer many questions from the journalists covering the event.

Many of them, from the Swiss to the Greeks, were working on round-the-clock media and needed to fill space in their publication and radio and television programmes.

Ireland were the heroes of the day after seeing off England. So I had to fill them in on such stories as the importance of Gaelic football games to the Irish people and, arguably more importantly, the role of sliotars in hurling — such was the appetite for all things green.

I joined my mates from Dungarvan United who were lodging in the centre of Cologne. They put so much money into one nearby pub that the manager laid on free beer all night on their departure date. Good on you Germany.

May our spirits regain these heady heights this month.

Come on you boys in green.