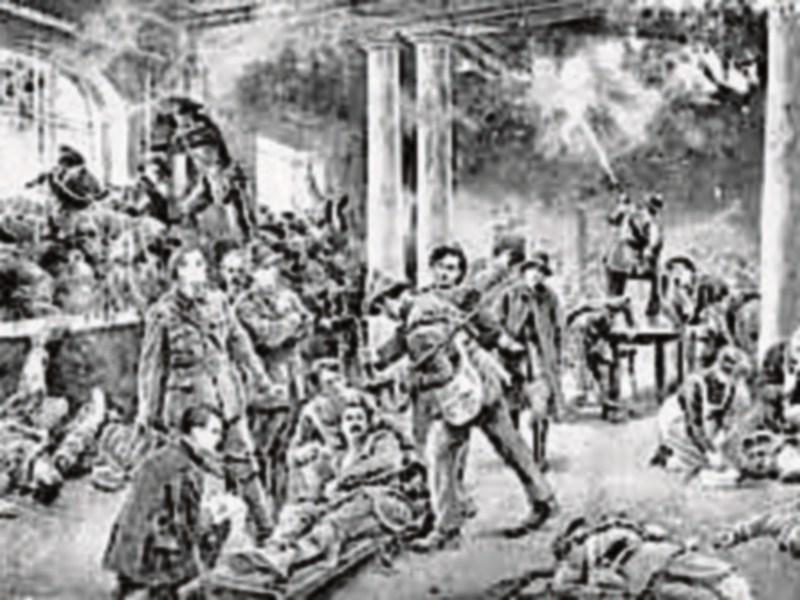 The Easter Rising had not happen-ed at the time the crowds assembled at Punchestown for the April meeting of 1916.

That might seem a strange statement but in that year Easter was late in the month and the bank holiday Monday fell on the April 24.

Punchestown was particularly early that year and this together with the meeting falling during Lent, and bad spring weather, was highlighted as among the reasons for a quiet meeting on the social front.

There was another shadow hanging over the fixture. This was the second Punchestown meeting to take place against the background of a world war.

Many of the sons of the big houses who were the leading lights of the social whirl surrounding Punchestown had gone off to the front line.

Two years into the war the telegrams had arrived to the hall doors and the parlours of the big houses bearing a sad message that one or other was dead or missing. It was a haemorrhaging of virility from which the gentry of the county would never quite recover.

However the core national hunt supporters are made of sturdy stuff and it would take more than war or weather to bring the racing to a complete halt.

As a correspondent summarised the situation in a local paper: “After all there is only one Punchestown and it is the two days of the year that all and sundry cast work and everything to the four winds, and betake themselves to the famous tryst.”

He did acknowledge that the 1916 festival did not sparkle as it had in the pre-war days: “We missed the many things that go to make Punchestown the incomparable place that it really is but, nevertheless, there was a lot of the old time associations about this year’s reunion.” However not everything had changed.

There were the usual turn-ups that were inseparable from the Punchestown: the usual falls, the usual popular favourite proving successful, and, the usual objections from the competitors in the race for farmer owned horses.

Punchestown would not be Punchestown were it for such things, and what was lacked by the absence of high society, was made up for in the spills and thrills on the track. And there were spills with four horses meeting with fatal injuries out of the 158 who came under starter’s orders over the two days of the meeting.

The week had started on a musical note when the locals who turned out for “Walking Sunday” were entertained by the brass band of the Naas Friendly Society who played a choice selection of airs in the enclosure.

Afterwards members of the band were provided with tea by the Punchestown committee.

This was another instalment in the tradition which has continued to modern times when Punchestown aficiondos from Eadestown and the adjacent parishes of Naas, Two Mile House and Ballymore Eustace converge on the track to cast an expert eye on the readiness of the sod and the finish of the fences.

Back to Punchestown’s place on the calendar it comes as a surprise to read that the meeting took place very early in the Spring occasion with the meeting of 1887 taking place as early as March 29 and 30.

In 1916 Punchestown preceded Easter by a margin and in terms of an association between racing and revolution has to surrender the bragging rights to Fairyhouse which is indelibly associated with the chronology of the Rising.