Punchestown: the man behind the final fence 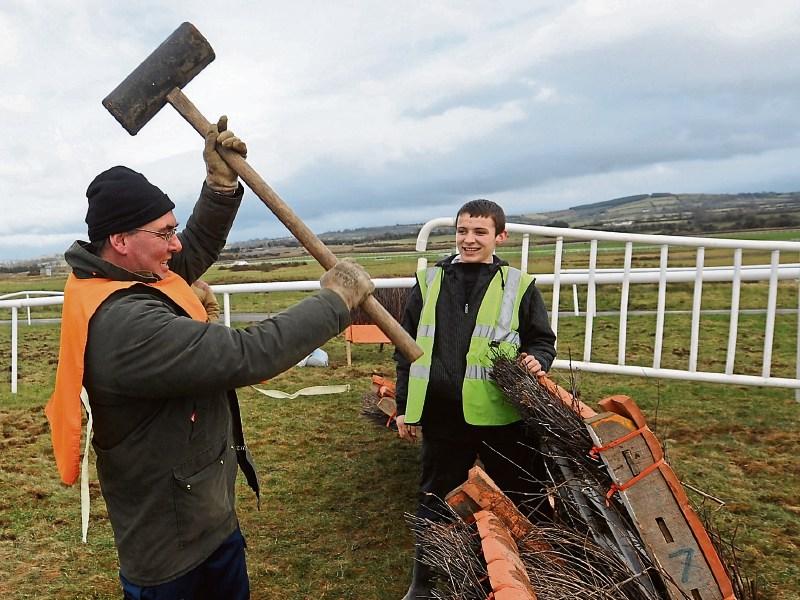 Ger Dunne making quick repairs to a hurdle during the Festival

The last fence at Punchestown Racecourse is probably the most high profile fence in National Hunt Racing, and the man in charge of it on race days is Naas man Ger Dunne.

Ger, from St. Corban's Place in Naas, is the youngest son of the late Kathleen and John Dunne. His parents went to Punchestown every year and brought himself, his four brothers and sister along.

“It was the main event of the year and we would look forward to it like Christmas. We would walk out the Craddockstown Road all together, hyper and acting up, with a lunch, a picnic packed by my mother.”

At the time most of the Punchestown action, for the locals at least, happened in the centre of the racetrack. “We would cross the track into the centre and see all the hurdy gurdies, the carnival, noise, stalls, three card tricks, people shouting 'you have to speculate to accumulate', and 'if you don't put it down you can't pick it up', Mrs. Lawlor's Marquee Tea Rooms, the bar and the bookmakers - it was all loud, lively, bright and colourful and we loved it.”

Sometimes they would walk up to the big double fence at the back of the track to catch more of the excitement of the race.

And at the end of the day they would walk home, and it's safe to say no one had any problem sleeping.

“We would go the three days, and Walking Sunday as well, to walk the track and watch the Millbrook Cup. At the end of it you'd be shattered. I never remember the rain stopping us and though there was even snow one year.”

He recalls the torrential rain one year. “There was a race on and we could hear the commentary, but we couldn't see the horses it was so bad. Then we'd hear the hooves and suddenly the horses would loom out of the wet and gloom over the last.”

When he got older he would go with cousins, the Dunnes from St. Michael's Terrace. “They had a car and we'd pile in. They'd park in Denis McCarthy's field. One year we drove out to the Corbetts near the Rugby Club, and all went in their car.”

It wasn't really about the horses at all for the young people, but eventually they would all grow old enough to put a bet on. “The first bet I had was small, maybe 20p, on Tommy Carberry and he won. I think it was Galway Bay, I recall a gray horse jumping the last and the excitement of it because that was the one that I backed.”

From times of walking and picnics, Punchestown grew to attract the movers and shakers of society during the Celtic Tiger years. “It was like Vietnam for a while, with all the helicopters coming and going bringing people to the races. I'd sometimes walk up to the gate to see who was coming in. The new arrival could be anyone from a President or Taoiseach to a film star or television personality. All the rich and famous people. It went from three days to four in 1999 and five in 2008 and anybody who was anybody would be there. You'ld meet people that you wouldn't see from one end of the year to the other.”

Ger started to work there when he was in his mid teens, when some local people would be taken on to help get the venue looking perfect, clearing and painting. He later became a fence steward and eventually worked his way up to the big one, the last fence, the one everyone focuses on.

“In the longer races, the last fence is also the first. There's three of us and we have to move fast to repair or replace any damage to the fence after they jump it the first time, so it's ready and they can jump it safely when they come around again.”

They also have to keep a keen eye on fallers. “We are also responsible for organising a by-pass, if a horse is badly injured for example, or if the Order of Malta are working on a jockey, we have to make sure the fence is by-passed to keep everyone out of danger.”

The top class entries at the Punchestown Festival, high profile horses, jockeys and trainers, is a huge attraction of course, but the style, and the star gazing is also important. And the laid back and friendly atmosphere brings folk back year after year.

Ger, a former Labour Party councillor in Naas, enjoys the festival as much as ever and is happy that future generations are also being encouraged to view Punchestown as a highlight of the year.

“Family Day is a great attraction. There are loads of free tickets for children in local schools and they all come out to the special pavilion and watch the shows. They have a super day and it's embedded in their minds. They will be back for more and probably bring their own kids out and so the tradition continues. The future attendance will be generated from this.” His aunty Ann is in her 80's and still goes to Punchestown. Ger and his wife Kathleen have four children, three girls and a boy, who were all brought to Punchestown as children. “I have two grandkids who will be going this year. It's great to see, an event for all generations.”