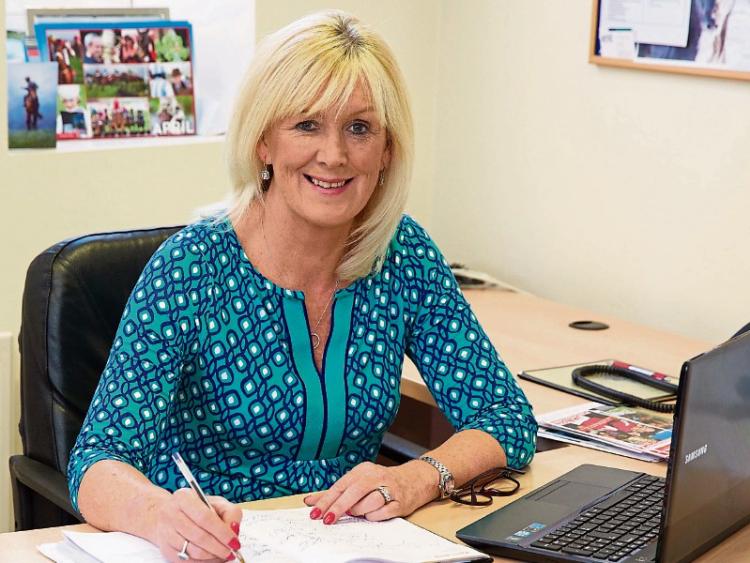 Hillary Cahill in her office at Punchestown

Mention the year 1998 around these parts and the first thing that comes to mind is Leinster and All Ireland football.

It was the year Kildare finally won a Leinster senior title and made it all the way to the All Ireland final, only to lose out to Galway.

1998 was also a very good year for Punchestown.

It was the year that Hillary Cahill arrived out to the Headquarters of National Hunt Racing at Punchestown to take up a full time position. Charlie Murless was the boss man back in those days and while Mrs Moore wasn’t running the show at the time she was very much involved also.

“In the office at that time was Theresa O’Connor in accounts; Elaine Nolan (Kilcullen) and myself; a small group” Hillary informed us on a recent visit.

And the following March Punchestown made another very significant coup when Richie Galway joined the crew. Richie of course has now been course manager for a number of years.

This time of the year we would take on an additional four or five extra to help us out with the work load but core team would only be about nine throughout the year, including Dick (O’Sullivan) Hillary explains.

Originally from Tuam in Co. Galway Hillery went to boarding school, St Louis Convent in Baal for young delinquents (Hillery’s words not mine) before joining AIB in Lynch’s Castle in Galway where she worked for six years.

Hillary met her future husband, Jim, who was in the army cadets at time and studying in Galway. When they decided to marry Hillary applied for a transfer over to Naas, thinking it would take two years or so but six weeks later I rang Jim to say “guess what I have just been granted a transfer to Naas” and I can’t tell you the reply was too positive, but I ended up over here in 1982; got married in 1983 and worked in the AIB for 25 years working under managers Paddy Carey, Dermot Murphy and finally Eddie Morrissey.

It must have been a big decision to leave the AIB after all that time I suggest.

“It was but I tell you what really put the tin hat on it was I was in two bank raids in Clane, in a very short space of time; the second one was particularly vicious and I remember thinking I can’t do this any more; I had small kids and while I really loved the bank and the team there I just felt it was getting too much for me but it was in the years when you could get another job, so I decided to get out.”

A few weeks after I left, I got a call from my next door neighbour, Roisin McNamee who was working here at the time, I agreed I came out for the 3 months and then get a call from AIB to go back for a few weeks to help them out and during that time Punchestown rang and offered me a full time job in January and here I am ever since said the popular Hillary.

“Lots of time we were really worried about the place; worried it would close down; we would lose our jobs; lean times but we got through it; Dick O’Sullivan came and turned the place around and we have never really looked back since.”

“A lot of times we would have had many customers from the banks, accountants; the big names; we would see them booking lots of tables a day; then it went down to a single table a day but “don’t put it in the company name; make sure there were no company logos around all that sort of thing but while it many would have gone down to half the business we had previously, nevertheless they never abandoned us, stuck with us and it has come right back up this year; we are way ahead on this time last year; all we want is a bit of good weather; Saturday is a huge day for us and last year it was the worse day weatherwise, crowds were down so weather is a huge thing for us” enthuses Hillary.

Like her boss Dick O’Sullivan, Hillary very much welcomes the fact that they feel they have the support of Naas and the people of Naas.

“Many felt we had gone too corporate and didn’t care about the ordinary people in the town, especially the older people; people who talked about the outside and inside areas where everyone met, neighbours, friends, it was like a mass exodus from Naas and everyone met up; we’d love to think we have built that kind of loyalty up again; taking the prices down with all the various offers we have these days, making it affordable to everyone, that is very important to us all working in Punchestown these days” insists Hillary.

So a big change for you personally from your days in the bank.

“Ye but in the end of the day you are still dealing one-on-one with customers, I love customers, meeting people and feel very relaxed in that role.”

A couple of years ago Dick decided he felt that I would do well going around every race course in the country promotion Punchestown; so there was a young lad working with us at the time named Conor O’Neill (now manager in Limerick Racecourse) he is from Blessington; so twice a week we went off meeting people, it was very successful; we did it for two full years; a lot of fun but we did a lot of business out of it.

“We had a stand in Cheltenham, promoting Punchestown but we also promote the hotels in the area, the B&Bs, the places to visit such as the National Stud, Kildare Village, Whitewater Shopping Centre, the boutiques in Naas it is in our interest to make it as easy for people to come and it is cheap to come.

“Remember a day in Cheltenham costs £95 sterling; you can come here for €25 or €17 for an OAP” now where would anyone get better value than that.”