Punchestown: Dick O'Sullivan outlines his plans for a major upgrade at the course

Redevelopment to get underway this year 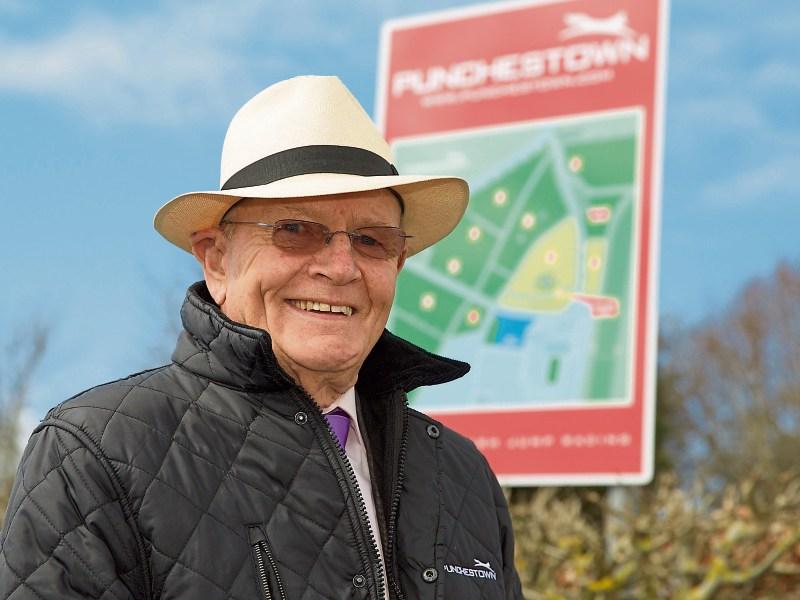 Another day, another dollar, another Punches-town Festival. How time flies.

“I know when you coming knocking on the office door, the Festival is just around the corner,” laughs Dick O’Sullivan as we made our annual visit for our pre-Punchestown chat a couple of weeks ago.

Sitting comfortably in the same office since he arrived back in 2002 Dick O’Sullivan is more upbeat (if that’s possible) than ever.

“Not sure if it is because we got our act together better this year, or the economy is really taking off but we have never seen anything like the interest that we are witnessing this year; corporates are up; pre-booking is phenomenal; we are putting €450,000 up; HRI have injected more money as we ensure prize money for the Grade Ones stay high and the English horses will come.”

“We expect some sixty horses from across the water and with the exception of the the Curragh we would attract more than the combined jump tracks,” insists Shona Dreaper, Head of Marketing at Pun-chestown.

“I swore I would never again do it again but we have spent a half a million on temporary buildings including extra toilets adding in extra food area; cover seats etc,” says Dick.

While looking forward to this year’s Festival, Dick is quick to point out that a major development programme for the next two years will kick in as soon as the 2016 Festival is over.

“We are starting a capital programme immediately after this year’s festival; we have not spent any capital funding since 1998 we simply did not have it but now that we are coming to the stage that we can see the finish of what we owe we are about to spend €6m on a capital programme” says Dick enthusiastically.

Shona explains that there is a plan to break up the entrance. “It is a big tarmacadam area now it will be broken into areas; we will have a walk of champions; a walk of the Paddy Mullins, the famous horses, the Hurricanes, the Moscows and that will all be interesting and new to people.

“The Grandstand area downstairs is a passageway from the Ring to the betting ring, work on that; brighten it; take those big heavy timber doors out; make it interesting; fresh cafes and bars and a lot more.”

“The big message is that while we said we would never do it again (temporary buildings), the demand is there and it makes financial sense so we are back up to half a million for temporary buildings for just a five day festiva and we know that it is not sustainable and we know it makes more sense to have a permanent building.”

No doubt the corporate end of things is a vital ingredient to the Punchestown coffers but Dick O’Sullivan while admitting “we must look after the corporate end but regardless of how much money we make out if it; it is a fickle market and if some-thing went wrong they will leave you very quick; we must never lose track of the man or woman; boy or girl that come through the front gate and that is the basis of our success.”

“I will never forget that lesson I learned when I came here first I couldn’t believe that when the place was about to go down the tubes and a meeting with the receivers and a decision pending whether they would or would not accept the rescue package and I couldn’t believe there was not a word out of Naas. I met a fella and he said very simple, you have lost touch with the locals.

“Since then we have worked exceedingly hard to get locals back on track; we will now have local stewards; GAA clubs for stewarding and at concerts; we have contributed €160,000 to local charities over the years; we now use all local contractors where possible.

“What we want to ensure is people who come here know they are at Punches-town and not just another race meeting. We have searched England and Ireland have had time and have enough to do this and do it over two years,” says Dick.

On the racing front Shona insists most of UK horses will be journeying across. “We were in England only last week, met all the big players, Nicholls, King, Pipe, Hobbs; Warren Greatrex, we need to get those up and coming trainers such as Warren, Dan Skelton, Neil Mulholland, these lads; they are going to have the Gold Cup horses of the future.”

Shone says that despite Cheltenham and Willie Mullins' Aintree assault, he (Mullins) has told us there is no way he will sacrifice Punches-town this is his spot; any horse that is well will be here and there is three weeks between Aintree and Pun-chestown so itsuits and a lot of them are lightly raced; there is no way Willie Mul-lins is going to let a lot of the big money on offer escape from him.”

On the social side of things Shona reminds us that Bol-linger is on board this year for the Best Dressed competition this is another huge draw for the Festival, adding the prize this year is absolutely fabulous.

Last year Dick O’Sullivan set his sights breaking the 110,000 attendance and “we were right on track until the weather let us down on the Saturday says Shone.

“Credit to our staff here when Liam (Holton) who had done a marvellous job on marketing left, I did not have to replace him. Janet (Creighton) took over sponsorship and Shone took over Marketing; so it was great that we could do that.”

Dick adds: “I never met anyone yet that was a total disaster; if you can find the key everyone has something to offer, given the chancey; we have an exceptional bunch of people here, you're probably tired of me saying that to you butour success is down to that.”

Dick adds that after this year’s Festival they will sit down and plan for the next five years; “a definite plan, the only thing in business that won’t work is if you stay standing still.”

And Punchestown is certainly not standing still and that's for sure!