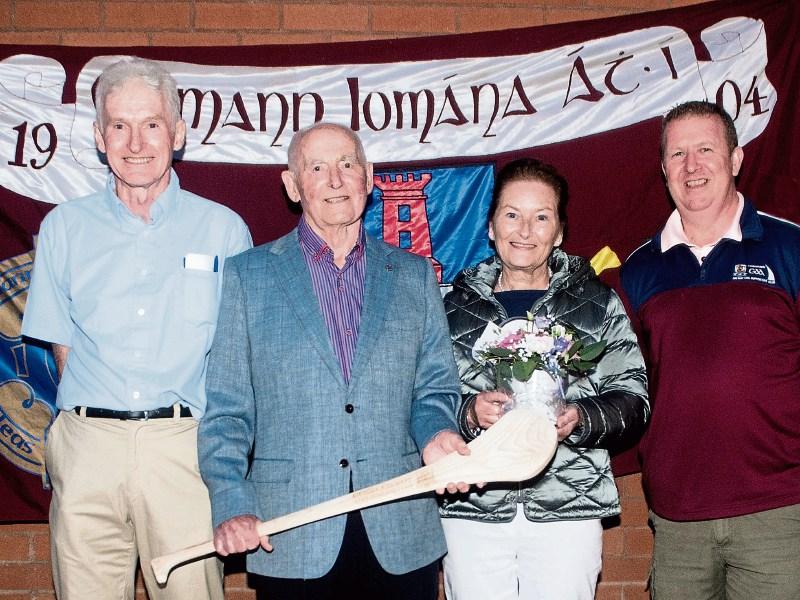 Locals came together in Athy recently for a socially distanced event to mark the departure of local GAA stalwart Gerry Gilroy and his wife Eileen.

The gathering in Geraldine Park on August 18 was organised by Athy Hurling Club along with the couple’s daughter Orla.

After 44 years living in Athy the Gilroys are moving to Dublin where their their family are based.

On behalf of the hurling club, chairman John McCauley presented Gerry with an engraved hurley made by Star Hurls in Kilkenny and Eileen received a flower arrangement from Bouquets and Baskets.

John thanked Gerry for the enormous contribution he made to the promotion of hurling in the town of Athy.

Gerry served as club secretary and delegate to the County board for many years as well as being involved as manager, selector and coach to numerous club teams both underage and adult.

Gerry was a primary school teacher and native of Belfast who had a great passion for the game which he was able to pass on to the pupils of Athy CBS primary school in St John’s Lane and to the wider community.

Gerry managed title winning teams at u12 and u14 level in 1982 and 1984.This group of players went on to represent Kildare in the 1984 Feile in Wexford where they performed with distinction and to win u16 and minor championships in Kildare in 86 and 88.

Gerry saw his enthusiasm and organisational skills further rewarded when Athy adult teams won Junior Titles in 1982 and 1989, going back to Senior ranks and reaching the semi final in 1990.

Players from these teams including Con Ronan, Christy Myles, Gerry Moloney, Sean Candy, Peter Barry, Tony Foley and Johnny McCormack were present to acknowledge Gerry’s input into the teams of that era.

Also attending was Bridie Brophy whose husband Tommy (RIP) worked so closely with Gerry over the years and Mick Kelleher who also was a colleague with Gerry at both juvenile and adult level.

A special thanks is due to Judith O’Brien who provided some wonderful archive material from her father Frank’s collection which as always provided some great talking points.

Gerry thanked everyone for coming along to say goodbye and to thank the club for all the wonderful memories he was taking with him.

The chairman on behalf of the club and all present wished Gerry and Eileen a happy future together in their new home in Dublin.

The evening finished with tea and cake provided by club PRO Emma Carbery which as always went down a treat!

Good luck to Gerry and Eileen on their relocation to Dublin!