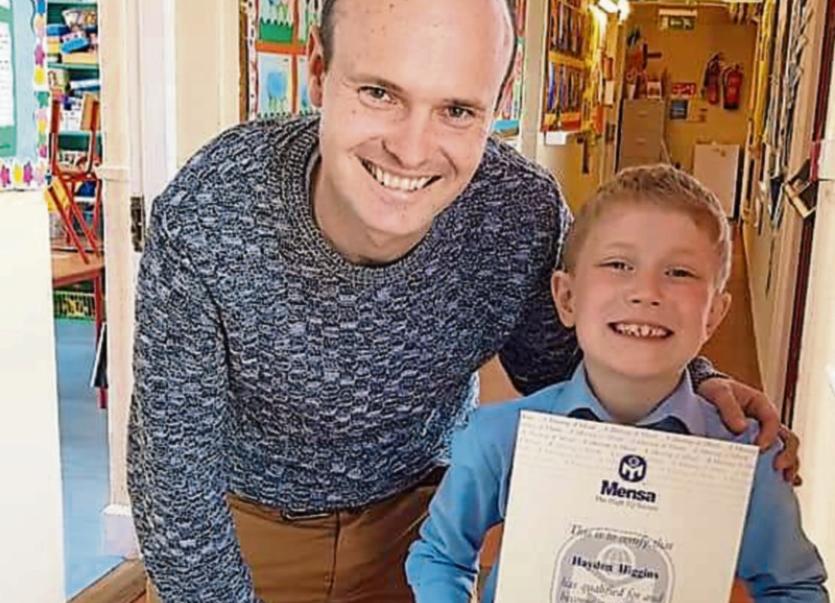 Heyden is pictured with his teacher Michael Kane

Aseven-year-old from Athy has become the youngest new member of Mensa, the high IQ Society.

Heyden Higgins, who attends Scoil Naomh Lorcain, asked his mum Eileen at just two-years-old to “please, teach me to read”.

He has just made his communion, has four siblings and lives in Coneyboro.

“His IQ is in the top seven per cent,” said his proud mum Eileen.

“He often does his sister’s sixth class maths homework and his teacher referred to him as a mathematician in one of his school reports.

“We had our suspicions that he was a little different. When he was four he went from junior infants to first class and he was six in second class. He’s made his communion and he’s only just seven.”

His teacher Michael Kane gives him fourth class maths to do in class.

“His teacher gives him maths books from fourth class and he flies through them,” she added.

“He has also been accepted on the DCU programme for gifted children to challenge them because mainstream school cannot. They study magical maths.”

Mensa is an elite society for people with a high IQ, and Heyden’s membership means that he is invited to all their round table discussions and organised events.

READ ALSO: A great day for Athy as new library is officially opened

“It is very interesting living with Heyden. While his cognitive ability levels are through the roof we do have to remember that he is only seven,” explained Eileen, who herself is a published author of novels and short stories under the pen name EM Higgins.

“He often says things to me like he needs to broaden his horizons.

“This is the type of language that he uses. He is so gentle and positive and there is not an aggressive bone in his body but you can’t get away with anything.

“He is really black and white and always wants to do the right thing, One time we were in the car and when we went to pull up Heyden had a biscuit he didn’t want to finish so I said to him throw it outside for the birds.

“He said no that’s littering. So I explained it’s not if the birds are going to eat it. Then he said to me that how did I know that this biscuit would not make the particular bird that eats it sick? So it went in the bin.”

Heyden will be starting third class in September, aged seven.

His siblings range in age from 28 to 12 and he is the youngest.

“He was pretty chuffed with himself when he heard and he was going around the house saying that he was a member of a secret society.

“He thinks it is very cool. And if anyone picks up his Mensa magazine to look through, he tells them that is for him only as he is the only member in the house.”

As he loves maths, Heyden is looking towards a future career working in maths and in cosmology.

“He is very interested in the cosmos, the universe and the works of Stephen Hawking.

“Mathematics is used to understand the universe, so he says that is what he would like to do in the future. He might even go to Cambridge to study. The world is his oyster,” said his proud mum.

Mensa offers its members lively and topical monthly magazines, regional newsletters, some 120 plus Special Interest Groups (SIGs), many websites and private discussion groups around the globe, which give access to a worldwide social network of intelligent friends and events for members to attend.

Mensa members’ interests range from diverse fields such as anthropology to Zoroastrianism.

There is an international membership of over 110,000 members in some 100 countries around the world.