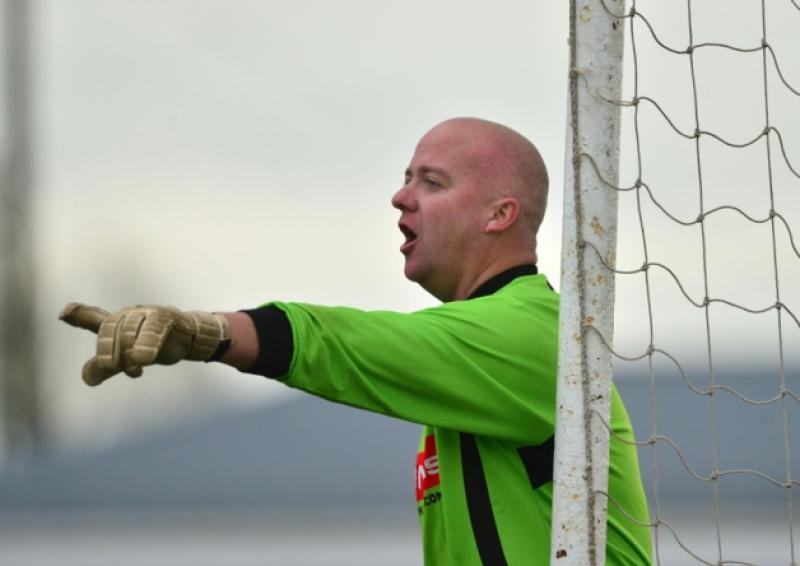 Castle Villa returned to the top of the CR Wynne Feeds KDFL Senior Division at what might be just the right time on Sunday with a 4-1 home win in Mullarney Park over Liffey Celtic.

Castle Villa returned to the top of the CR Wynne Feeds KDFL Senior Division at what might be just the right time on Sunday with a 4-1 home win in Mullarney Park over Liffey Celtic.

This win sets up a winner-takes-all final game next Sunday at the same venue against champions Naas United.

This encounter started with Liffey getting a lot of joy down their left flank in the early exchanges, and threatened on a number of occasions from set pieces.

Villa right back Liam Cosgrave, who was part of a defence which was marshalled by Alan Hickey soon got to grips with the quick passing game of the visiting team, and Villa began to dictate the pace.

Cosgrave went on to have a brilliant game for the Castledermot side, being solid in defence, and offering a huge threat going forward.

Stephen McDonald had a good opportunity to open the scoring but elected to pass when perhaps the shot was the better option after getting on the end of a Paddy Mahon flick on from a goal kick after 20 minutes.

Almost immediately afterwards David Keating’s drilled centre across the six yard line eluded everyone when it was certain that the slightest touch would result in a goal.

Jordan Harmon had an impressive game and was creating good chances for the Villa attack, and from a cleared Harmon cross after 27 minutes, Anthony Lawler was on hand to chest down the ball and place a dipping volley out of the reach of Paddy Campbell in the goal to make it 1-0.

Liffey were by no means out of the game and were threatening with the excellent Anthony Durney leading the line.

The main threat Liffey posed was from set pieces from Keith O’Riordan and Robbie Cullen however Villa’s Alan Hickey and David Keating made excellent headed clearances.

On 43 minutes Villa were made to regret missed chances when a free from the corner of the box was driven to the back of the Villa net by Kilby.

The second half started with Liffey changing their ‘keeper when Brian Collins replaced Campbell who went into the middle and he went on to have a good 45 minutes, being instrumental to his team’s search for a lead goal.

Villa skipper Anthony Lawler was unlucky to see a curling free strike the post and come back into play, and Paddy Mahon saw Liffey ‘keeper make a brilliant save from an excellent 18 yard shot after 60 minutes.

The opening goal of the second half went to the home side after 63 minutes when Keating was upended and Mahon made no mistake from the spot.

Villa manager Liam Murphy replaced the impressive Harmon with Lee Doyle after 70 minutes, and this decision turned out to be an inspired one when Doyle took charge of the ball from Stephen McDonald to place a unerring shot inside the left hand post to make it 3-1 to the home side.

To their credit, Liffey still pushed forward in search of something from the game through Kilby and Phil McCoy and Villa’s Alan Hickey and Gary Mulhall had to be at their best to keep them at bay.

The game was finished off when David Keating capitalised on a fortuitous rebound to slide home a fourth.

So the KDFL Senior Division now comes down to 90 minutes on Sunday as Villa now sit top by a single point from Naas United. The teams have met twice this season already, with both teams chalking up one victory a piece. The stage is set for what will surely be an entertaining and tense finale.