McHugh strike seals it for Patrician 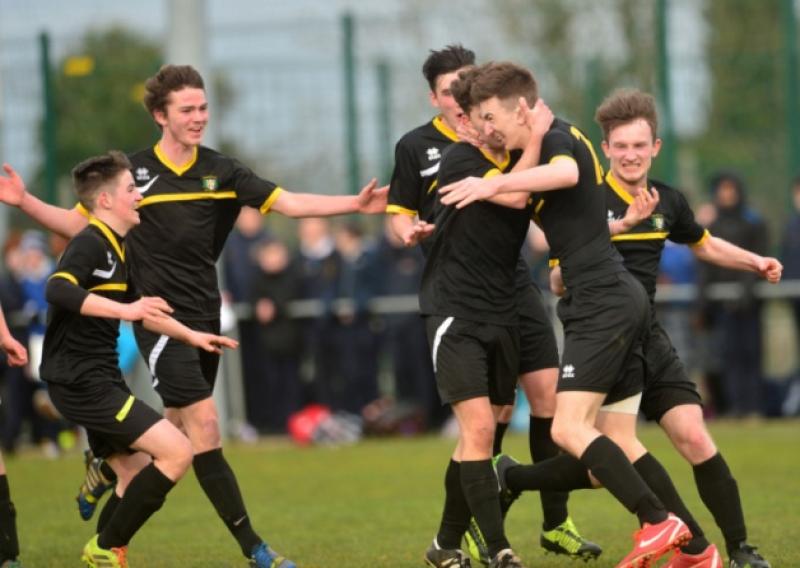 Going in the game, the school thought they were looking for their first senior title since 1975, it was only after the game that it was realised that the ’75 success was actually in the ‘B’ competition and that this was the first ever time that the PBS were top dogs in Leinster.

There have been successes at other age groups, like in 2003 when a team managed by Janice O’Brien and Tom O’Riordan won a junior title, but this was the first senior title, remarkable considering the calibre of player who have gone through the school over the years.

The goal that settled the game came just seven minutes from time and it was all down to Darragh McHugh’s persistence and desire. Playing the lone striker role is one of the toughest jobs in football but it is even harder when playing with an injury.

McHugh’s thigh was heavily strapped but he never stopped running for the cause and in the 83rd minute he got his reward. Composed Confey centre back Ciaran Lyons was one of the best players on the pitch, perhaps only bettered by PBS centre half Con Kavanagh, but when he rolled a back pass toward his goalkeeper Mick Kelly, McHugh came to life.

Like all strikers he sensed a chance when there barely was one and took off to close down ‘keeper Kelly. By the time the Confey custodian had taken a touch on the ball, McHugh was already on his toe and he swooped to nick the ball away and was then left with an easy finish into the empty net.

That led to pandemonium on the PBS sideline because right from the very early stages it was evident that this was a going to be a game of few goals and whoever got the first would be massive favourites.

It was a game dominated by defences with Kavanagh and Jamie Harte superb for the PBS. Confey had more controlled possession in the game and preferred to play the ball on the ground more than their opponents but they struggled to create any real chances.

The PBS central defensive duo were given extra protection in front by deep lying midfielder Michael Logan and on the few occasions that Confey found a way through the defence, Aaron Masterson showed a good pair of hands.

There was little in the way of goalmouth action in the opening 20 minutes but Confey remained comfortable on the ball and their probing almost paid off when Sean Gilbert slipped a ball through to Shane Ferris but Ian Meehan got back to block the shot.

PBS were more inclined to go direct when on the ball and McHugh up front was their preferred get out ball. A lot of the time in the opening half the central midfield trio of Logan, Adam Burke and Sean Healy struggled to get forward to support him though and as a result he spent a lot of the first half isolated.

Any sighting of goal that Karl Hegarty and Riadhain McBride’s team did have seem to fall to winger Ciaran Troy but he fired well wide on two occasions.

The game opened up a little in the second half and ten minutes after the restart, PBS produced their best piece of football. McHugh held the ball up well and played it down the right to Ciaran Glynn. He had time to pick out Troy at the back post with a fine cross but his header was well blocked by the Confey defence.

At the other end, they were given a reminder of Confey could do when Gilbert put Masterson under pressure following a long ball. Masterson didn’t gather the ball at the first attempt and Gilbert had a clear sighting of goal but he couldn’t get enough on his shot and Masterson was able to get back stop the ball before it crossed the line.

The PBS had another major let off with ten minutes to go when Andrew Doolin latched on to a right wing cross and shot from the edge of the box. His effort deflected off the heel of Jamie Harte and with Masterson wrong footed time seemed to slow down as the ball trickled towards goal but thankfully for the PBS it went narrowly wide of the post.

By now, most supporters in Peamount were expecting extra time and possibly even a penalty shoot out but McHugh saved his intervention for the perfect moment and the goalscoring hero was left to lift the trophy as team captain, something that some very fine footballers in the PBS history never managed to do.