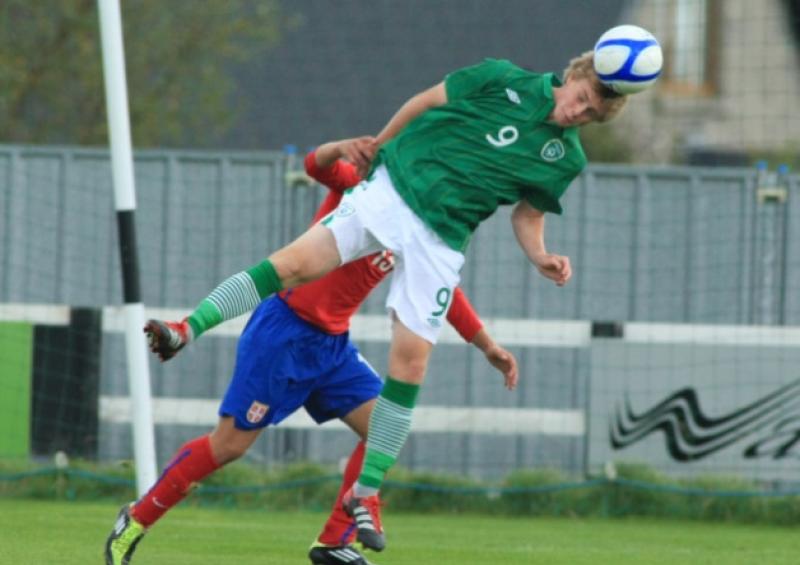 When Sam Byrne last spoke to the Leinster Leader, the young striker from Kill had just completed his first year with Manchester United’s Under 18 academy side.

When Sam Byrne last spoke to the Leinster Leader, the young striker from Kill had just completed his first year with Manchester United’s Under 18 academy side.

Some 18 months on, Sam is still on the books of the Old Trafford outfit, having progressed into United’s Under 21 team – effectively the club’s reserve team.

Having completed a transfer deadline day loan move to Carlise United last week, the former St. Joseph’s Boys player is set for a hugely important period in his career as he takes his first steps in senior football.

Approaching his 16th birthday, Sam signed for United in July 2011 following a number of trial periods with the club.

The Old Trafford based club weren’t the only one to pursue the young Kill man’s footballing talents.

After netting a second-half brace for the Dublin and District Schoolboys League in the final of the prestigious Kennedy Cup tournament in 2009, the then 13-year-old received trial offers from a dozen or so English clubs.

“In the end, I only went on trial with about five of the clubs interested, I wasn’t able to be going around everywhere,” he told the Leinster Leader.

Forced to whittle down his options, Sam’s choice came down to three clubs – Aston Villa, Wolverhampton Wanderers and Manchester United.

One might assume Sam’s decision was largely based on the high standing the Manchester club hold in the pantheon of great footballing names.

However, Sam was quick to dismiss the significance of this factor in his choice.

“No, not at all, it was just United is where I felt most comfortable,” he admitted.

When he first took to the field at the famous Carrington training ground, Byrne was met with the task of adjusting to a much higher standard of football than he had being playing in the DDSL Premier Division with the renowned Sallynoggin football nursery, St Joseph’s Boy’s.

“The overall standard was far higher in every aspect,” remarked the Kill youngster.

“Technically, the players were way better, but probably the biggest part was just the sheer pace they played the game at.

“Comparing it to when I played with Joey’s made it feel you had hours on the ball in the DDSL.

“It took me a couple of weeks to adjust to that,”

Byrne’s first two years at Old Trafford saw him nail down a regular spot under tutelage of Paul McGuinness in United’s Under 18 side,l where he played alongside current Premier League wonder-kid Adnan Januzaj.

With the process of making it as a professional footballer being notoriously cut-throat and uncertain, provisions were made to ensure that Sam’s education would not be neglected.

“I spent two years doing a BTEC course in sports science. If I ever wanted to go to college back home, that’d get me in somewhere,” he explained.

For now though, football remains the sole focus for Sam.

His promotion from the academy to Warren Joyce’s Under 21s has seen him brushing shoulders with the star-studded first team.

“There has been loads of times first team players have come down to play matches with us if they’re coming back from injury or in need of game time,” he said.

“Guys like Darren Fletcher and Fabio and young players on the fringes of the first team like Wilfred Zaha have all been down with us.

“Sometimes we’ll mix in with the first team for training sessions. It’s all great experience,” he added.

When asked which first team player has impressed him most in training, Sam provides a very definite answer.

“Van Persie. Without a doubt. For me as a striker, some of his finishing is ridiculously good.”

In addition to the Under 21s, this season has also seen Sam line out for a Nicky Butt managed United Under 19 side consisting of a mixture of Under 18 and Under 21 players, which was assembled to compete in the new UEFA Youth League.

With the competition being run in the same format as the Champions League, Sam’s team faced the Under 19 equivalent of the first team’s European opposition.

And so it came about that he and his team mates flew alongside the senior United stars en-route to their European away fixtures.

The European tournament exposed Manchester United’s Under 19s to continental playing styles that differ greatly from what they face on a weekly basis in the Under 21 FA Premier League.

Such experience is something Sam places immense value on.

“The players tended to go down a lot easier than they do in England,” he said.

“On top of that, the referees tended to blow for fouls much easier.

“You couldn’t go in a hard as you would in a normal league match, so I suppose it was a bit of a learning curve when it comes to playing in Europe.”

Byrne was particularly impressed by the approach of Spaniards Real Sociedad, and added: “Technically, they were very good and as a team they moved the ball really well.

“It was all about passing and keeping good possession of the ball. English teams tend to play much more directly.”

2014 is also set to be an eventful year on the international scene for the former Naas CBS student.

With international caps going right back to Under 15 level, Sam has the honour of captaining Paul Doolin’s Republic of Ireland Under 19 side.

When asked about the difference between playing for Ireland and United, Sam points to a contrast in tactical approach.

“We play the same 4-3-3 formation with Ireland as we do with United, but we probably aren’t given the same amount of freedom to attack as Warren Joyce gives us.

“No disrespect to the players on the Ireland team, it’s a very good team, but it’s probably because the quality of player isn’t quite as good as what we have with United.

“There we have internationals from not just England, but from places like Uruguay and Belgium as well,” he explained.

So what does the Ireland Under 19 skipper hope to achieve in the next season or two?

“Well firstly, hopefully I’ll be kept on again for next season,” he said.

“If I can manage that, I suppose the aim will be to establish myself as a regular in the Under 21s and make a good impression there.

“I’d be hoping to maybe go out on loan at some stage as well – just to get some first-team experience under my belt.”

Well his wish has come through.

Just last Friday, Sam fulfilled his agenda of gaining first-team experience elsewhere by completing a loan move to League One Carlisle United, which will see him line out for the Cumbria outfit until the end of the season.

Only hours after completing the move, he was straight onto the Carlisle team bus before making his debut for the Brunton Park club as a 77th minute substitute in a 2-1 defeat away to Bristol City.

Who knows, if Sam continues to progress at the same rate he has during the last two-and-a-half years at Old Trafford, Manchester United and Ireland’s next big scoring sensation may very well be a Kildare man.