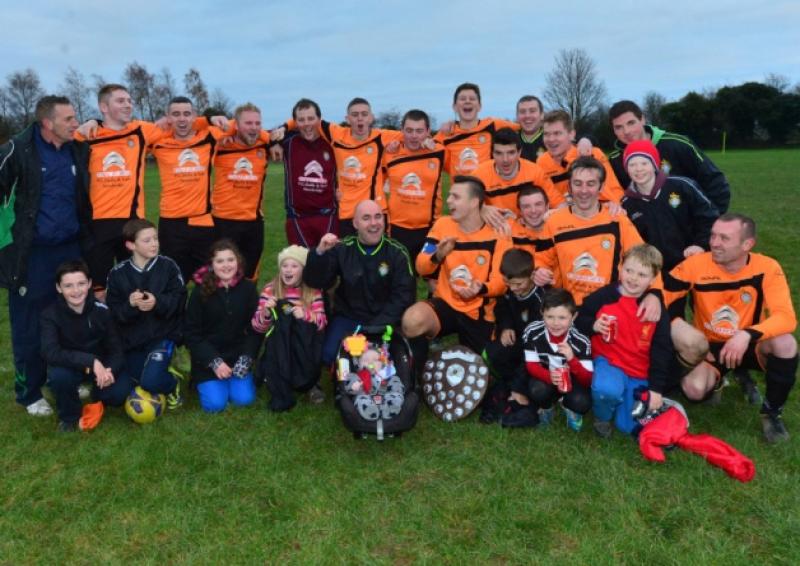 Hoey Spar Moorefield Division 1 League Champions Caragh Celtic claimed their second trophy of the season when they overcame Redwood FC from Division 2, in the KDFL Division 1 and 2 final.

Hoey Spar Moorefield Division 1 League Champions Caragh Celtic claimed their second trophy of the season when they overcame Redwood FC from Division 2, in the KDFL Division 1 and 2 final.

Caragh Celtic won by the narrowest of margins on Sunday at the excellently prepared Rathbride Road.

Mid table Division 2 side Redwood pressed their more illustrious opponents all the way.

However, a Stephen Riordan 44th minute strike was all that separated the sides in the end and Caragh went on to claim victory for a second week in a row.

Caragh were quick out of the blocks and it took only two minutes for them to threaten the Redwood goal.

However, Alan Igoe was unlucky to see his headed effort just wide of Mark Murphy’s cross bar following a good run down the flank by Gareth Byrne.

Redwood response was swift. Two minutes later a John Finnegan free from outside the area, following a challenge on his brother Leon, was well saved by Caragh ‘keeper Niall Rooney.

Caragh with the upper hand now were finding it difficult to make any in roads as the Redwood back four of Alan Fitzpatrick, Eoin Higgins, Ian Maloney and Sean Barrett were in top form sniffing out any threat by the Division 1 side who were restricted to long range efforts.

Disaster struck for Redwood as the first half counted down when Caragh eventually broke the deadlock.

Following a good run and cross by the impressive Gareth Byrne, Steven Riordan fired home from eight yards giving Mark Murphy no chance in the Redwood goal, to put his side one nil up going into the break.

The leaders took the initiative following the restart and could have doubled their advantage after five minutes when Alan Igoe and Noel Byrne combined to set up Steven Riordan.

However, his headed effort just shaved the crossbar.

Caragh continued to dominate the early stages but again could find no way past the Redwood rearguard who mopped up any advances from the leaders.

Indeed Redwood could have taken it to extra time through late chances from Leon Finnegan and Phil Byrne but their efforts were thwarted by an alert Darren and Dean Heavey at the centre of the Caragh defence.

Caragh lost the influential front runner Steven Riordan with ten minutes to go with a head injury following an accidential clash of heads.

However they weathered the late revival from Redwood and went on to clinch victory and lift the Division 1-2 shield for the first time in the club’s history.

Best for the winners were Alan Campbell in defence, Steven Riordan until injured and Niall Rooney in goal. ‘Keeper Mark Murphy, Alan Fitzpatrick in defence and Leon Finnegan in midfield were outstanding for an unlucky Redwood.