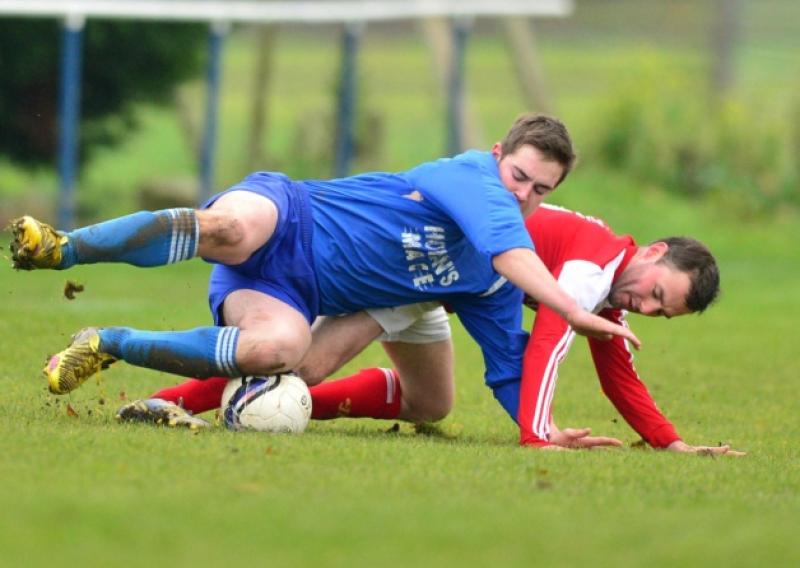 Castle Villa AFC’s second string bowed out of the O’Neill’s Leinster Junior Shield at the second round stage on Sunday.

Castle Villa AFC’s second string bowed out of the O’Neill’s Leinster Junior Shield at the second round stage on Sunday.

They went down by the odd goal in three against a strong Wexford League side Moyne Rangers.

This was a game where Moyne Rangers were looking for revenge having lost to Villa at the same stage of the competition two years ago.

Villa started the brighter team and after only two minutes Colm Kelly had a great shot which was well saved by the visiting ‘keeper Dylan Cloke.

The home side continued to press forward and three minutes later some skillful play from Malcolm Kirwan set up James Byrne but his shot was just wide to the right on Cloke’s post.

The visitors then began to play their way into the game and opened the scoring against the run of play on fourteen minutes with a well taken goal from markman Aaron Davis.

Villa to their credit hit back straight away and a free kick from Mark Ormsby was flicked on and James Byrne came in at the back post to head home the equaliser one minute later and it was all square again.

The Kildare League side continued to press now and some good work from Malcolm Kirwan created a chance for Colm Kelly.

However, Kelly shot over the bar just on the half hour.

It was end to end stuff for the rest of the half, but with both ‘keepers holding their own the sides went in all square at the break.

The second half started as the first had with Villa on top and after three minutes Colm Kelly was fouled just outside the box.

Paddy Murphy was unlucky to see his effort just over Dylan Cloke’s post.

Rangers lost Cloke soon after through injury and he was substituted by Tim Dwyer.

This substitution didn’t break their momentum as they regained the lead when striker Aaron Davis broke free again and made it 2-1 to the visitors.

Rangers began to get on top now and could have increased their lead on 64minutes.

However some heroics from Villa’s netminder Mick Lawlor kept the minimum between the sides.

Villa started to press for the equaliser now and had some good chances through Colm Kelly and Paddy Murphy.

However, they found the Moyne defence in top form and the Cilla forwards just couldn’t get past for a clear shot at goal.

Castle Villa to their credit though continued to search for the equaliser right until the final whistle but to no avail and Moyne Rangers got their revenge by winning 2-1 in what was a great game of football.