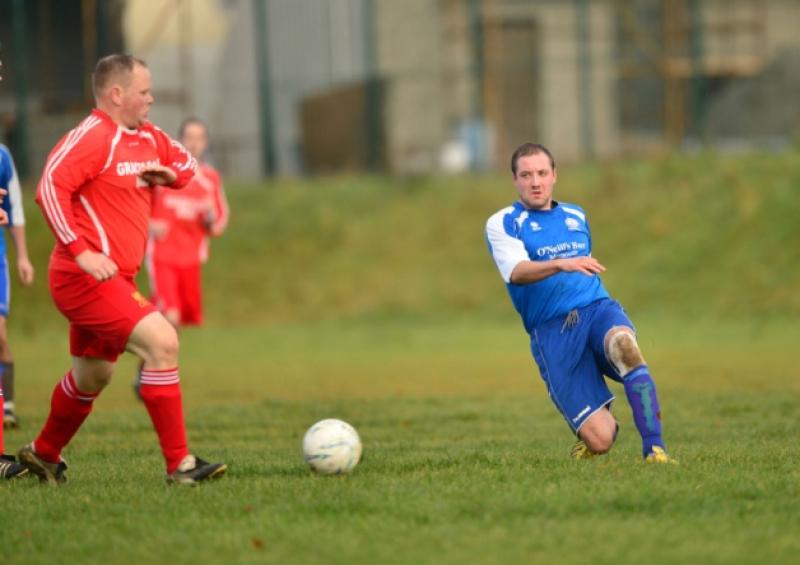 Redwood welcomed Barnhall Rovers to play the final game of the Cooks Cabin Division 2 season. The game had little at stake for Redwood but was crucial for Barnhall.

Redwood welcomed Barnhall Rovers to play the final game of the Cooks Cabin Division 2 season. The game had little at stake for Redwood but was crucial for Barnhall.

Rovers needed to push to avoid finishing in the bottom two and possible relegation to Division 3.

So for home side to come out of the blocks quickly was a surprise for the Barnhall team, as it was Redwood took the lead through Leon Finnegan.

Some great team passing started the move off as Redwood brought the ball out of defence through JP Kearney who found Jonny Finnegan in space down the left wing. Finnegan beat the Barnhall full back before squaring for his brother Leon to smash home an unstoppable finish past Barnhall ‘keeper Mark Charles after 20 minutes.

The home side were unlucky not to double the lead moments later when Jonny Finnegan pressured the Barnhall defence. Finnegan raced clear and with only the goalkeeper to beat he was unlucky to see his effort rebound of the post.

Barnhall came more into the game and could have levelled on the half hour mark when their captain Colm McManus tested the Redwood net minder Mark Murphy two minutes later but it was the leaders who dominated proceedings and hit the post for a second time again through Jonny Finnegan.

This time the provider was Redwood captain Ian Maloney who’s throw in was aimed well into the Barnhall box. The headed effort from Finnegan struck the post and was scrambled clear of the danger area.

The visitors had few chances as the first half progressed but their best chance came when Redwood lost possession in their own half ten minutes before the half time break. Redwood ‘keeper Mark Murphy was in fine form though and brilliantly saved Brendan Lennon’s driven effort.

Barnhall had their best spell of the first half then and brought the game level with a well taken goal.

A long throw was flicked on by Alan Power to midfielder Jerry Egan who made no mistake from five yards to finish past Murphy in goals and it was all square again five minutes before the half time break.

Redwood didn’t buckle under the pressure however and took the game to Barnhall as referee Coe Whelan brought the first half to a close.

Calvin McCoy for Redwood was driving forward at every chance and won the set piece that Redwood would restore their lead from.

Ian Maloney again delivered the ball into the Barnhall box and as they tried to clear Redwood’s Philip Byrne pounced on the loose ball and placed the ball which was deflected past Mark Charles by his own defender Gary Allen to put the home side 2-1 up on the stroke of half time.

Redwood were on top in the early stages of the second period but it was the visitors who levelled for the second time to put themselves right back in the game when a poor cross came across the Redwood goal and a mix up in defence saw the Barnhall striker Ian Tighe tap in from two yards after fifteen minutes to tie the game at 2-2.

Redwood pressed for the winner and the best chance of the second half fell to Leon Finnegan.

A great ball into the centre of the penalty area from Philip Byrne saw Finnegan clear and unmarked and as Barnhall ‘keeper Mark Charles closed in Finnegan lifted his effort over the bar.

Both teams so desperately wanted the winner and the game got very stretched for the remaining 20 minutes.

Superb defensive work from both sides however meant that there was to be no more goals as the match finished all square with two goals a piece.

Best for the visitors were Alan Power, Liam Smith, Brendan Lennon and Colm McManus while Mark Charles in goal, Jerry Egan and Alan Egan excelled for the the home side.