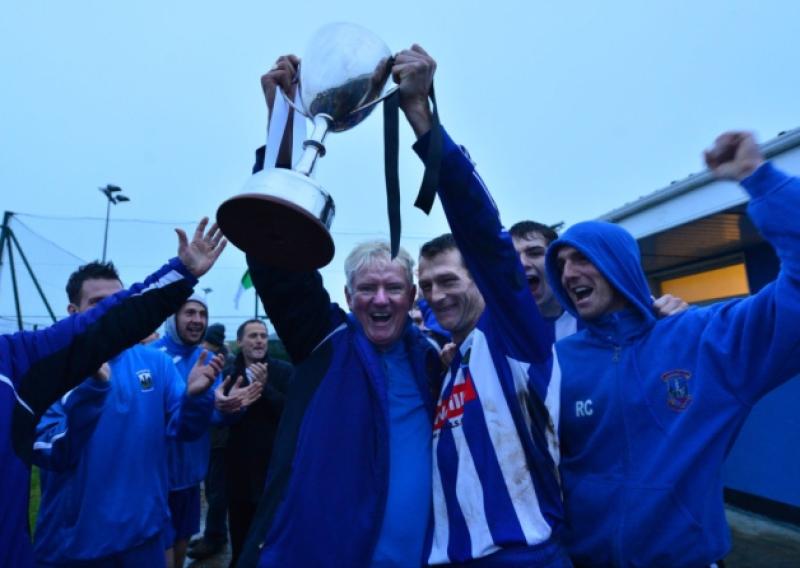 Castle Villa AFC claimed the top KDFL League trophy (CR Wynne Feeds Senior Divison) for the fifth time on Sunday afternoon in front of a large crowd when they were victorious over 2012 champions Naas United FC in the final game of the season.

Castle Villa AFC claimed the top KDFL League trophy (CR Wynne Feeds Senior Divison) for the fifth time on Sunday afternoon in front of a large crowd when they were victorious over 2012 champions Naas United FC in the final game of the season.

An 81st minute Paddy Mahon strike was all the separated both these fine sides in what was a fantastic advertisement for the game and a fitting end to the Kildare League’s 20th Season.

The game started at a frantic pace as both sides tried in vain to gain the upper hand. Villa were first to threaten after five minutes when they won a free from 18 yards out. Anto Lawler sent in a stinging shot which was expertly tipped over for a corner by United keeper Aaron Smith.

Villa didn’t have it all their own way for long as Naas gained the upper hand with Stephen Burke calling the shots in the middle of the park creating chance after change down the left wing for Alan Crowe.

Naas has their first real chance after 13 minutes when Villa’s Liam Cosgrove fouled Crowe twenty yards out on the right. Crowe sent a dangerous ball into the area but Jason Acton’s header was dealt with superbly by Alan Proctor in the Villa goal.

Two minutes later Naas won another free from the same position, this time Alan Hickey who was excellent in the heart of the Villa defence got his head to the ball clearing it to safety. Hickey was making some crucial clearance at this stage for the Castledermot side who had to sustain a period of pressure from Naas midway through the half.

Ten minutes before the break Villa had an excellent opportunity to edge ahead when an inswinging David Keating free caused confusion in the Naas defence however the inrushing Villa front runners Stephen McDonald and Vinny Dowling were unable to get the vital touch. Six minutes later Naas were unlucky when Vernon Nolan shot over Proctor’s crossbar from a well taken James Murphy corner.

In the last action of the first half Roy Byrne shot over from close range for the home side following good work from Vinny Dowling and Paddy Mahon and both sides went in all square.

Four minutes into the second half Villa were dealt a severe blow when their influential midfielder David Keating received his marching orders from Referee John Black following a second caution.

The home side had to endure another spell of pressure from United as they struggled to find their shape and they had to be on their guard for two consecutive corners by the 2012 champions in the 52nd and 58th minutes.

Slowly the home side got themselves back into the game following the introduction of the youthful Jordan Harmon when he replaced Vinny Dowling up front. In the 61st minute Villa’s Paddy Mahon rattled the Naas crossbar with a fantastic effort following a great individual run down the right wing and cut in.

The home side looking like they had the extra man at this stage continued to threaten and were unlucky again in the 72nd minute when Roy Byrne went on a great run down the wing to cross for Paddy Mahon who shot from close range was well saved by Smith in the Naas goal.

With fifteen minutes remaining Naas had a glorious opportunity to take the lead when they won a corner which was well delivered into the area by Vernon Nolan. Substitute Joe Ryan latched onto the loose ball however Proctor dealt with the danger on the second attempt.

In the 81st minute Castle Villa’s Paddy Mahon scored what could be one of the most important goals of his career when the hard working Anto Lawler sent a dangerous free into the Naas area, Mahon turned neatly to slot past the despairing dive of Aaron Smith to put his side 1-0 up to rapturous applause from the large home crowd.

Naas now needing two goals to reclaim their title never gave up and from the tip off threw everything at the Villa defence and one minute later Gary Mulhall had to be quick off the mark to clear a Naas effort off the line with Proctor beaten.

With five minutes remaining United’s Vernon Nolan hit the Villa cross bar and the rebound was cleared to safety.

However time ran out for the Naas side and Villa went on to claim the Trophy for the fifth time.

Captain Anto Lawler on receiving the trophy from League Chairman Michael Casey paid tribute to all the team and Villa Committee and in particular Manager Liam Murphy who worked tirelessly during the year.

Man of the Match was defender Alan Hickey for the home side.