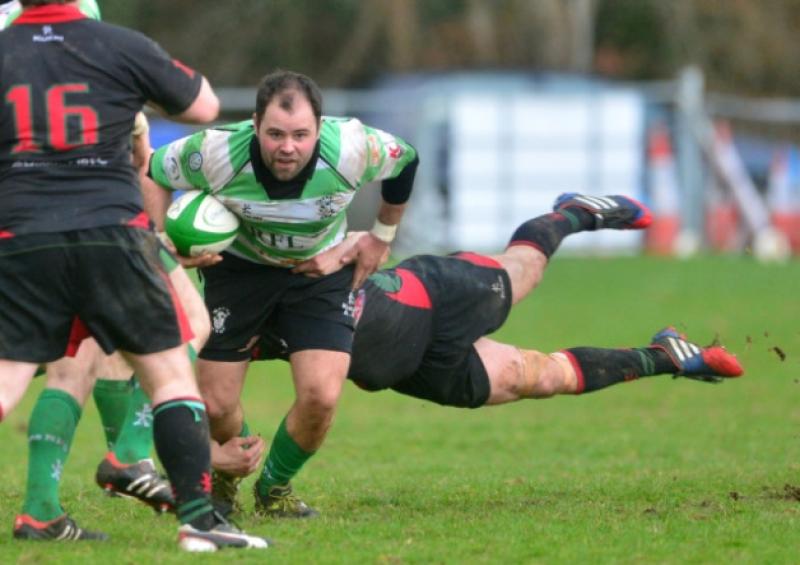 Naas hosted Highfield at Forenaughts in the penultimate match of Div 2A. This was a game from which both sides needed to take maximum points to avoid the dreaded relegation zone.

Naas hosted Highfield at Forenaughts in the penultimate match of Div 2A. This was a game from which both sides needed to take maximum points to avoid the dreaded relegation zone.

Before a ball was kicked Naas were 1 point behind their Cork city opponents and lying 3rd from the bottom of the league with 2 matches to play. At the end of the match the home side, deserved winners, jumped Highfield and joined Seapoint on the same points in joint 11/12th position.

At half time the Cobras were ahead 20 points to 3 after the home side had scored 2 goals and 2 penalties against a single penalty to the visitors. A brilliant individual try on the 15th minute from Outhalf Peter Osborne was the opening score of the match. Osborne with a keen eye for the break was quick to exploit a flat defence when he stepped inside his opposite number during the 4th phase of a concerted attack by the Kildare side to score under the posts. The try was converted by David Aherne to give the Cobras a 7 point lead.

Niall Carson scored a second 5 pointer when the Hooker dotted down on the whitewash as he controlled the ball at the back of a maul created off a line-out from Darragh Kiely which was powerful driven from the 22 by the home side’s forwards in united push. This score on the 34th minute was converted by Full – Back Aherne. In between these two fine goals the Naas No 15 converted 2 penalties on the 25th and 28th minutes when Highfield, under serious pressure from a rampaging Naas side were penalised for being offside.

Highfield only scored 3 points in the first half. This score came from a penalty on the 22nd minute after Naas lock Darragh Kiely was pinged and yellow carded when he was deemed to have deliberately interfered with play when coming from an off side position in front of Naas posts. However the large attendance was surprised when the black and red Cork-men opted to take a penalty rather than go for a scrum and attempt a pushover try particularly as the home side were down a forward.

The Munster side had a big pack led by Captain and former Connacht player Dave Kelly but they met a stubborn Kildare pack led by Johnny Holmes who faced down their opponents in the scrum. The Naas Backs also dominated their opposing back line which was forced into making errors as they were continuously harried across the field of play by Naas Centres David Lynch and Henry Bryce and the two Delaney brothers on the wing.

In the 3rd quarter with the ‘Field playing with the advantage of the wind and the hill the Naas side absorbed a lot of pressure but they were pinned down deep inside their own half. The home side could not get their hands on the ball despite the best efforts of Ryan Casey at wing forward and lively scrum half Sam Sutton. It came as no surprise to the onlookers that Highfield would score and inevitably it was a typical Munster like driving maul which led to a deserved try. Prop Jason Carton scored in the right corner on the 50th minute. Unfortunately for Highfield their kicker Mike O’ Flynn was well off with his strike from the side-line. However the kicker atoned later when he delivered a 3 pointer from a penalty 25m in front of the posts after Naas were blown for an offside offence when Highfield came on another surge looking for a score to get them back into the game.

These two scores in the 50th and 55th minute lifted the spirits of the visiting Cork supporters but it also had the effect of re-awakening the Lillywhites and the entire Naas team dug deep and defended their 9 point lead manfully as the game entered the last quarter.

In the difficult playing conditions both teams served up a tough uncompromising brand of rugby where every player did their utmost to win. However the Naas team appeared to have the legs on their bigger opponents and ran them ragged in the last quarter keeping them pinned inside their 22 for last critical 10 minutes of the game.

Jason Harney at tight head was a steadying influence on the home side’s scrum which was giving away on average 3 kilos per man to their opponents. David Benn in the 2nd row robbed several of the Highfield lineouts in critical phases of the game and helped powered the Naas scrum particularly when down a man in the first half. Critically during this period Naas scored as much as Highfield did despite being down a man which epitomised the inner strength of the team.

Paul Monaghan operating at Wing Forward chop tackled everything in a red and black jersey over the entire afternoon and the quiet Carragh man was declared ‘Man of the Match’ by Rory Larkin of RFL Steel. Ray Fullam marking his debut as a senior player when he came on for the injured Jeff Delaney showed his footballing quality with a tremendous kick deep into the Highfield half with his first touch under pressure.

Ryan Casey worked his socks off and Andrew Kearney his replacement showed astuteness in the latter parts of the game as he safely held onto the ball as he along with this fellow forwards collectively drove the Highfield players up-field as the game entered the last few minutes.

Not alone did Naas take the four points on offer they also as importantly worked hard to deny the Corkmen a losing bonus point. The ‘Field acutely aware that every point is going to be critical at the end of the season but so too were Naas and once they got possession of the ball deep in the second half they played controlled attacking rugby where it was kept tight and safe in a marauding pack who attacked Highfield but retained ball in hand.

When Naas found themselves in a striking position they worked the ball wide where the lively Backs now led by Darragh O’Shea exploited space behind the Cork side which forced them into retreat. These deft kicks kept the visitors defence turning and retreating as opposed to attacking. This tactic played off and Naas were unlucky not to widen the scoring difference as they missed two kickable penalties in the 73rd and 78th minutes. However they retained possession from the drop offs and held out to sign off on a tremendous victory.

Naas play Banbridge, away, in the final game of the league on Saturday 12th April. Naas will need a point from this game to be sure of avoiding a potential promotion / relegation play off against the 3rd team from Div 2 B depending on results from the Seapoint (at home to Old Wesley) and Highfield (at home to Bective Rangers) matches. This victory a second successful win in a row and the fifth in the league campaign provides Naas with an opportunity to take on a high flying Ulster side coached by Rory Best’s brother to seal their own fate. They must take a minimum of a point to stay out of the relegation dogfight and remain in this very competitive UL AIL Div 2A league in order to build on a future of playing Senior Rugby at a very high level.

Tony Frost, a sprightly 84 years ‘young’ man, who had the distinction of playing and coaching both Highfield and Naas team’s was honoured as a special guest of Naas club President Jim Casey and Highfield club President Dave Barry at a pre-match reception. Tony, a Cork native but long-time resident in Naas, whose father was one of the founder members of Highfield, in an emotional speech, stated that this was the happiest day of his long rugby life and paid tribute to both clubs. To commemorate this common link Tony presented a silver cup which will be played for between both cubs in an annual match. Tony was given a standing ovation by all attendee’s for his lifetime commitment to rugby.