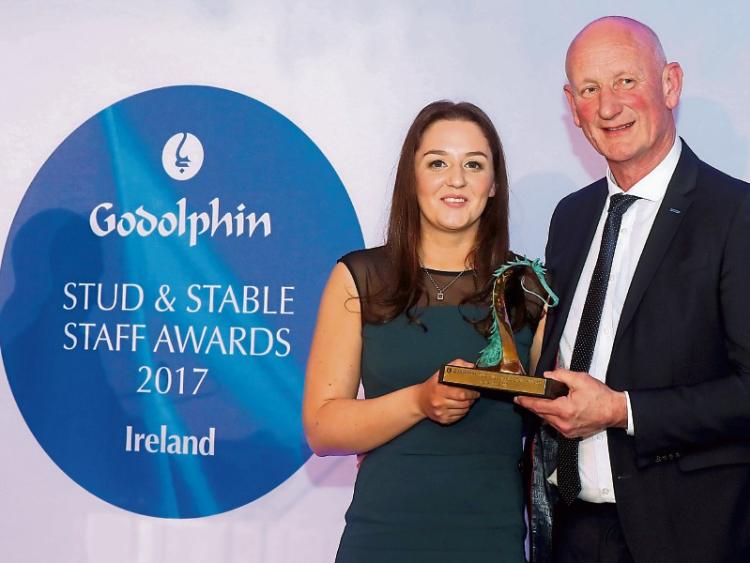 Punchestown Racecourse picked up the Racecourse Award, chosen by the Irish Stablestaff Association, based on a quality programme survey with the purpose of setting quality standards for stable staff at all racecourses throughout Ireland. Punchestown won €2,500 to spend on upgrading facilities which will benefit stable employees.

Owen Smyth, Head Stallion Man at Kildangan Stud was announced as the Irish Racing Excellence Award winner – taking the top honour at the Godolphin sponsored event. He also won the Leads by Example Award. Owen received €5,000, a specially-commissioned trophy and €3,000 to be shared among his colleagues for winning the Leads By Example Award. He also won an additional €5,000, the overall winner’s trophy and his colleagues in Kildangan will share an extra €5,000 for winning The Irish Racing Excellence Award.

Catherine McAvinney, Practice Manager at Anglesey Lodge Equine Hospital who is from Maddenstown on the Curragh, won the Administration Award.  Catherine has been working at Anglesey Lodge for 37 years and, in that time, has seen the business evolve from two vets to a staff of 26. Catherine received €5,000, a trophy and €3,000 to be shared among the employees at Anglesey Lodge.

The Travelling Head Person Award went to Patrick ‘Whacker’ O’Brien from Dermot Weld’s training establishment on the Curragh.  Patrick is from the Curragh Camp in Kildare and has been working for Dermot Weld for 20 years. He received €5,000, a trophy and €3,000 to be shared among the Rosewell House team.

Sarah McCrory, Head Girl at Ted Walsh’s won the Newcomer Award.  Originally from Dunboyne in County Meath, Sarah joined the team at Ted Walsh’s in 2014 and despite not coming from a horse background, her affinity for, and natural talent with horses and her love of racing was enough to see her through to win this popular award category.  Sarah received a cash prize of €2,500, a trophy plus a five-day educational tour to Dubai with flights and accommodation included.