INTERVIEW: Puppy Power looks back on his finest seasons as Punchestown 2022 begins 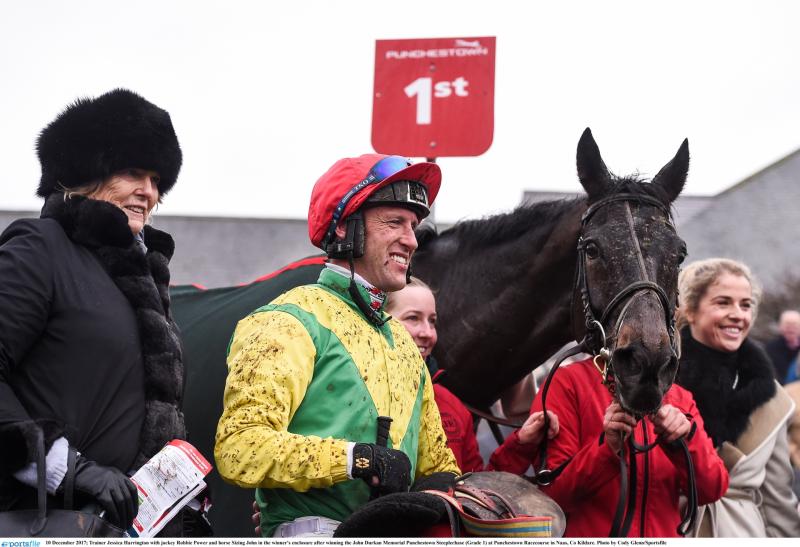 Robbie "Puppy" Power has a great case for one of the best years in National Hunt racing history. 2017 was that year and Robbie and his partner in glory, Sizing John, became the first to win three Gold Cups in the same year. With the pair being first past the post in Leopardstown, Cheltenham and Punchestown on Gold Cup day.

Ahead of that now famous season, Sizing John was transferred to the stable of Jessica Harrington at Moone in County Kildare and Robbie became his regular jockey. The rest, as they say, is history.

“The big wins, they mean everything. That’s why a jockey wants to be a jockey, to ride winners in Grade 1 races and at Cheltenham that's why. Early on in my racing career I knew there wasn't a hope in hell of me ever being champion jockey so the next thing you want to do is get on as many good horses and ride as many big winners as you can,” Robbie said.

Well in 2017 Robbie Power and Sizing John amassed several Grade 1 wins but the Irish Gold Cup, Cheltenham Gold Cup and Punchestown Gold Cup trifecta allowed the pair to make history as the first to do so.

“Coming back to Punchestown there was that extra bit of pressure because you knew the whole place was there to see him but it was pressure I kind of enjoyed. It was nothing that ever really phased me and I definitely always had great confidence riding Sizing John. He was a joy to ride, a great jumper, he made life very easy for a jockey,” Robbie explained.

“I remember after crossing the line on him in Punchestown and it was just such a sense of relief because at no stage in that race did I feel comfortable. I think it might have been one race too many for him that season. But that showed the class of him, great horses find a way to win when they are not at their best and that's what he did.”

Punchestown is the big National Hunt season closer and before the pressure of completing the historic with a third Gold Cup win there was the small matter of the second, Cheltenham.

“I thought going into Cheltenham that year with Sizing John that we were hoping he'd get the trip in the Gold Cup. Then just for everything to snowball the way it did was unbelievable,” Robbie said.

Robbie and Jessica Harrington have become synonymous with each other through their success and due to Harrington’s focus on the Punchestown festival, success for Robbie over the jumps in Kildare was never far away.

“Punchestown has been great for me and Jessica (Harrington) always targets Punchestown so I have been very lucky there. It is fantastic racing first and foremost, competitive Grade 1 racing and it is a celebration of the year that has been. The Irish horses that have been dominating for the year meet the English ones that come over and they clash at the end of season finale for National Hunt racing,” Robbie described.

“She (Jessica) always showed great faith in me even when owners maybe didn't want you riding their horses she had that trust in me. When you are going out riding with that kind of confidence behind you it makes life as a jockey so much easier. There is nothing worse than riding for a trainer or an owner and you feel they don't really want you. So when you have the backing of a top trainer like Jessie it fills you with confidence.”

But before great successes there must be a starting point or if not a clear one there will always be a turning point. That big moment for Robbie Power came at 25 years old at the 2007 Aintree Grand National.

Robbie was on Silver Birch for Gordon Elliot and having won a Beecher’s Chase and a Welsh Grand National three years prior they knew at the very least the distance wasn't going to be an issue.

“He was 33-1 and Gordon (Elliot) had not trained a winner in Ireland yet so we were hopeful more than confident. But the horse had come to form and about 10 days before the Grand National we came home from a piece of work on the Curragh and after that we were bullish that if things went his way he could finish in the first five,” Robbie explained.

“The race had gone so well but I hadn't even considered winning until we crossed Melling Road and came to the second last. I was second or third coming to it and turned my head expecting to see a wall of horses queuing up behind me but there were only five or six close enough to have a chance so I figured we had a good chance to be placed. He (Silver Birch) absolutely winged the last and when he was able to come up from that was when I knew he had plenty of gas left to get home.

“I can still hear the commentator saying McKelvey is coming down the outside and I thought God we have come this far and we’re going to get pipped but to be fair to Silver Birch he was idle in first place but as soon as the other horse came to him he picked up and went again.”

It was an enormous win on a big outsider and it changed things for Robbie. After a horrendous 2006 with injuries for the young jockey, which included breaking his foot, wrist and collarbone, a Grand National win was a hugely welcome lift.

“To come back from all that and win a Grand National gave me a huge boost. A fortnight later I went to Punchestown and won the Champion Hurdle on Silent Oscar for Harry Rogers. Those two wins were great to push me into the next season,” Robbie said.

A huge win and a raising of his profile Robbie continued to get rides at big events. But getting first past the post at Cheltenham Festival eluded Robbie time and time again over the coming years. 2011 felt like it could be another one of those joyless years for Robbie after he hit the last on the back of heavily fancied leader Oscars Well.

“I had been to most Cheltenhams to that point and hadn't any joy, I hit the crossbar on a few occasions. We thought that year going into the Wednesday of Cheltenham that Oscar’s Well was a big chance and thought he was going to win.”

“He jumped the last really well but just stumbled at the back of it and lost his footing. That was a hard pill to swallow when you haven't had a festival winner but I had no time to worry about it because I was in the next race on Boston’s Angel. We got the win and to get that compensation so quickly after getting ejected off a leader. Then 35 minutes later riding your first Cheltenham festival winner was a great feeling.”

Robbie called the win at the time “a dream come true” and would go on to realise even more dreams than maybe possibly even he could have imagined. But they were all dreams conjured up by a four year old Robbie Power on the back of his beloved Shetland pony all those years ago.

But Robbie’s race is not run and after a frustrating last year with injuries he is back in the saddle. A fractured hip meant Robbie missed Christmas racing for the first time in his over 20-year career.

“Everything is fine now, I still have to work every day on keeping the muscles loose because I am not as supple as I used to be. There is still a lot of maintenance that has to be done,” Robbie laughed.

“But thank God it’s all working at the moment.”