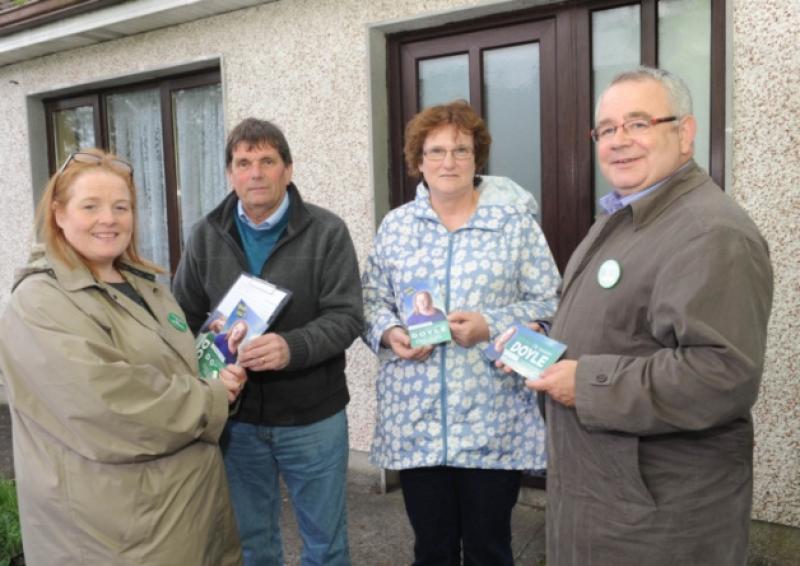 Last time out on the hustings, flak jackets were the must have accessory for Fianna Fail candidates admits Cllr. Suzanne Doyle.

Last time out on the hustings, flak jackets were the must have accessory for Fianna Fail candidates admits Cllr. Suzanne Doyle.

This time around, it’s hard to gauge the reaction, explains the Kildare town resident. Of course being in opposition, you would expect the government parties to be getting it in the neck instead, but people won’t forget how the troubles began during Fianna Fail’s reign.

However, the local elections are a different beast. Residents are concerned about what is happening on their doorstep - What have the sitting councillors done for them and what can the newcomers deliver? Parties don’t seem to be as relevant. As Cllr. Doyle and her team of canvassers, joined by local TD, Sean O’Fearghail, move from house to house in Bishopsland on Thursday May 8, many residents are keen to engage. The reception is far from hostile, as many know Suzanne Doyle, but they do have concerns about various issues.

One man has an ongoing problem with a range, another resident points out that most homes had faulty windows and doors replaced by the council, except for an elderly neighbour. Water problems since the switch over to the new supply are constantly being raised with candidates. One lady tells how her skin has been badly affected by the hardness and lime in the system. Cllr. Doyle explains how the council is constructing a water softner treatment plant, which should help parts of Kildare including Bishopsland. Cllr. Doyle said she is seeking a map to identify the exact areas, which will be covered.

“Unfortunately it won’t be able to help those on the Rathangan Wellfield supply but, if I get elected, I will be trying to see if they can blend the softer water with that supply to reduce the hardness,” she stressed.

Another mother is devastated by the news that St. Brigid’s Boxing Club may be forced to close as it has until September to try and find new location.

She tells how her daughter was training for the All Ireland’s and the club would be a huge loss to the town. She explains how her younger children were also hoping to follow in her daughter’s footsteps. She asks if a special facility could be built. Cllr. Doyle explains that would be a perfect long term solution but it would take time and money. She said something needs to be sorted out urgently, and in the meantime, a longer term plan could be drawn up. She promises to lobby to find an emergency solution and tells the homeowner she will keep her informed.

Cllr. Doyle polled well last time around securing 1,654 first preference votes in the Kildare electoral area, second only to poll topper, Cllr. Paddy Kennedy. However, she fell down on the transfers, but still managed to get elected on the ninth count. This time around, the loss of her base in Monasterevin to the Athy area, could hit her hard and she is aware things may be tight. She is also not convinced the new powers promised to councillors under the new municipal system will increase accountability for the public, but if elected she says she will work hard to ensure the council is accountable to those it represents.