Malcolm wants to help other families with a MND diagnosis 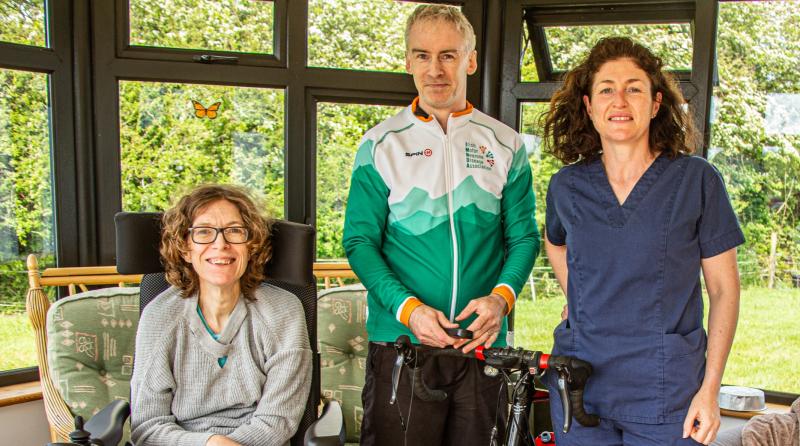 Sinead and Malcolm with their IMNDA nurse Katie Kinsella

Having grown up in Coill Dubh, Malcolm McGrath moved down the road to Killina, Carbury in 1994. Now residing in Wexford, his dad still lives in Killina and he retains strong connections to his home county.

Just a year and three months ago, Malcolm's life changed dramatically.
“In May 2020, my wife Sinéad and I had planned our dream holiday to New York and the Dominican Republic as we were 25 years together,” he explains.
“We had planned to do lots of hiking, scuba diving and relaxing…. if that’s a thing because we don’t ever sit around too long! Covid hit and put our dream holiday in jeopardy. But worse was to come when Sinéad got checked for a limp she had and in May and she was diagnosed with MND.”

He stresses that while they were supposed to be flying out on holiday, Sinead was in hospital getting her diagnosis alone as visitors were not allowed due to the pandemic.

Within a week the McGraths registered with the IMNDA.
“From that moment our fears were made a little easier when the staff reassured us that they were there to help in any way they could. It’s very difficult to describe the support we got from them,” he says.
“Since then they have supplied a specialist powered wheelchair, electric bed, IPad with communication software, and call assistance technology. They also provided home care grants to allow carers come in and help and counselling grants for the whole family.
“On top of that we have a nurse who we can call. She has an area from Wicklow to Kerry and yet has time to talk, visit and advise us when needed. There are only four of those for the entire country.”
Malcolm tells how the family have also linked in with the team in Research Motor Neurone who are trying to find an understanding of MND and a cure.
“We do whatever research testing is available to us. They also provide their app which allows both myself and Sinéad to give feedback on the illness, from a patient and a carer’s point of view,” he says.
“We meet some of their team in the fantastic clinic in Beaumont Hospital headed by world class MND specialist Prof Orla Hardiman.
“So for the first year anniversary of Sinead’s diagnosis, I took on a cycling challenge which I called 1,000k in May. My plan was to cycle 1,000k either virtually on my turbo trainer or on the open road.”

Being a full time carer, Malcolm was unable to hit the road too often, so he completed most of this task on his turbo trainer, raising €10,605 for both the IMNDA and Research Motor Neurone.

During the challenge, he had the idea to hold a raffle of a signed cycling jersey.
“I reached out to my Facebook contacts and got a signed Tadej Pogacar jersey from a friend,” he says.
He started to work on the fundraiser but had to spend more time caring for Sinead as the weeks went by.
“Sinead is now constantly in a wheelchair and needs several different lifting aids to move between her bed and armchair or to power wheelchair. We have extra carers coming in now to help with breakfast, lunch and light duties while I can get other stuff done, including shopping, garden maintenance, clothes washing etc,”he says.

The family had to buy a new wheelchair accessible vehicle which now makes travelling around much more comfortable.
“The more money we raise, the more we can help other families like ours,” he adds.
Sinead would like to thank the IMNDA, who also helped her dad throughout his MND illness and Katie Kinsella who is always available to help and offer advice.

She also thanked the MND clinic team in Beaumont hospital and the team in Research Motor Neurone.

To help raise funds for the IMNDA, please go to www.raffle4imnda.ie to purchase a ticket.
The main prize is a signed jersey from Tadej Pogacar, but there are prizes from ClubVitae Wexford, Clayton Whites Wexford, a Monart Spa voucher donated by a good friend, Cycle Superstore, and Cigala Cycling. The raffle takes place on August 31.