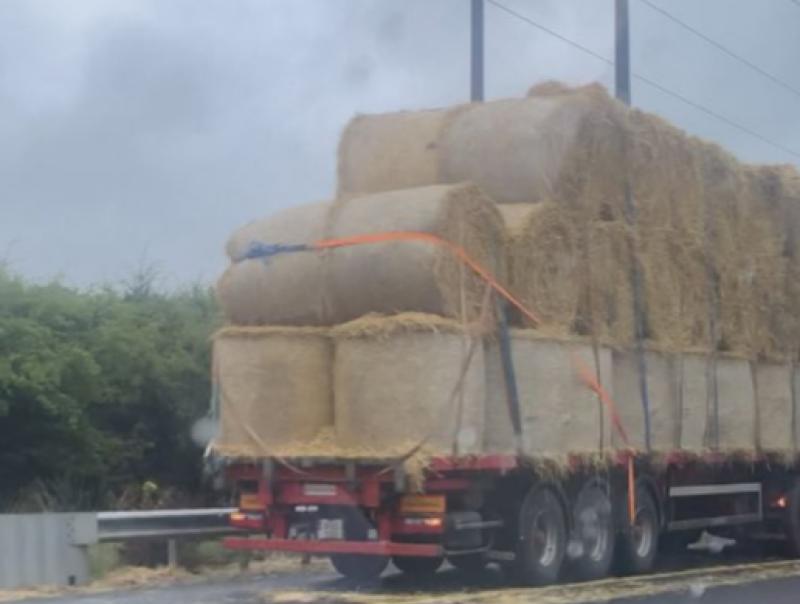 The lorry parked on the side of the motorway near Naas. Picture: J Moore/Twitter

Hay bales falling from a lorry on the M7 motorway near Naas, Co Kildare, this afternoon caused traffic chaos and motorway tailbacks of up to 10km. The throw-in of the All Ireland semi-final between Waterford and Limerick at Croke Park has been delayed by half an hour as a result.

The incident occurred on the east (Dublin-bound) lane of the motorway at Junction 10 around 2.20pm. Emergency services from Naas and Newbridge attended the scene and removed  the bales, but motorists are advised to avoid the area this afternoon if possible as it will take some time for traffic to clear.

Kildare County Council is helping to remove straw from the roadway.

The All Ireland semi-final at Croke Park will now start at 5.30pm. Fans from both counties would have been on the road to Dublin along the motorway at the time of the incident.

Be careful if driving on the #N7 before the new exit at Kerry Group in Naas. Truck carrying hay hit the bridge and hay everywhere on the road and bits of the bridge fell also. Traffic is mental pic.twitter.com/nqMsVg6Kaj