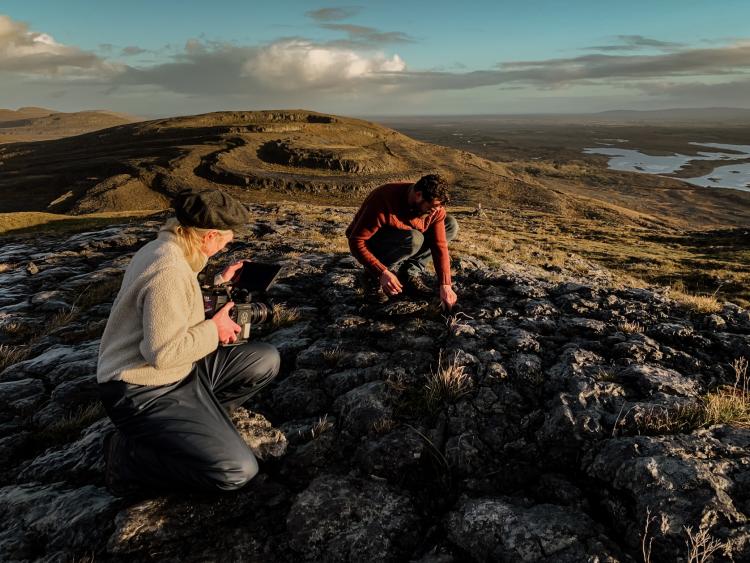 Prosperous woman Alice Costello has a deep appreciation of nature — a trait she has passed on to her daughter, Katrina.

“She always sees love in everything — in a flower or a person — she brings out the beauty and grace of things, not just in wild things, but in people too. This is the greatest gift anybody could bestow upon a person — to see the beauty in things. It’s that grace and love that I try capture in my cinematography,” says Katrina, whose admiration fills her voice, when speaking of her mum.

When asked what Alice thought of her latest documentary, The Burren: Heart of Stone, Katrina tells how she admired the beauty of the unique landscape.

“I suppose, like most people, she wouldn’t have known much about it before she saw the documentary,” she says.

Having worked in the Burren for 13 years, the Prosperous native decribes it as a place full of intrigue and mystery.

“‘It is not a landscape that gives up her secrets easily, but in every fold of rock and around every corner there is always a new surprise,” she explains.

The two-part series was aired over two weeks on RTÉ One earlier this month and received a massive 33% audience share of the Sunday night slot.

Using intimate natural history photography and the spontaneous insights of a cast of local contributors, the documentary is narrated by Brendan Gleeson.

Still available to watch on the RTE Player, Heart of Stone takes audiences on a journey through the ages, tracing the genetic story of the Irish people. It tells the story of the Irish hunter-gatherers and reveals what became of them. It asks if prehistoric farmers irreversibly altered this landscape and if modern Irish society is descended from those who first lived here over 10,000 years ago. It also reveals the first people were most probably dark skinned with blue eyes.

Katrina is thrilled with the positive feedback to her work, stressing that people want to learn more about their place and their people, giving them a real connection with their ancestors.

Her debut documentary, The Silver Branch was also well received when it was released in October 2018.

“Brendan Gleeson was an admirer of The Silver Branch and he really loved it. When I asked him if he would narrate Heart of Stone, he said he would be proud to be associated with it,” she says.

Determined to tell the story of the Irish landscape, Katrina believes the bogs of Ireland and Kildare have their own secrets to reveal.

Filming throughout the Covid-19 pandemic has lead to challenges. Those involved in the production remained in their own bubbles and the Covid restrictions were adhered to.

“It was excruitiating,” acknowleges Katrina, “You couldn’t rent costumes so all the costumes were made by me and my kids.”

They dyed them with onion skins and deer skins were brought from South Mongolia by a friend of Katrinas. Forget make up. The actors used handfulls of muck to cover their faces as our ancient ancestors.

The first episode moves through the natural cycles of the seasons, witnessing spectacular scenes from the natural world, concentrating on a variety of wildlife such as the cuckoo, orchids, wildflowers, kid goats, foxes and woodlands. Episode two locates clues written in the stones, tombs, and underground caverns that populate the Burren and that help us to travel back in time to reveal fresh secrets of the human story. Throughout th production, one thing shines through is Katrina’s love of nature, which was fostered in her native home of Kildare.