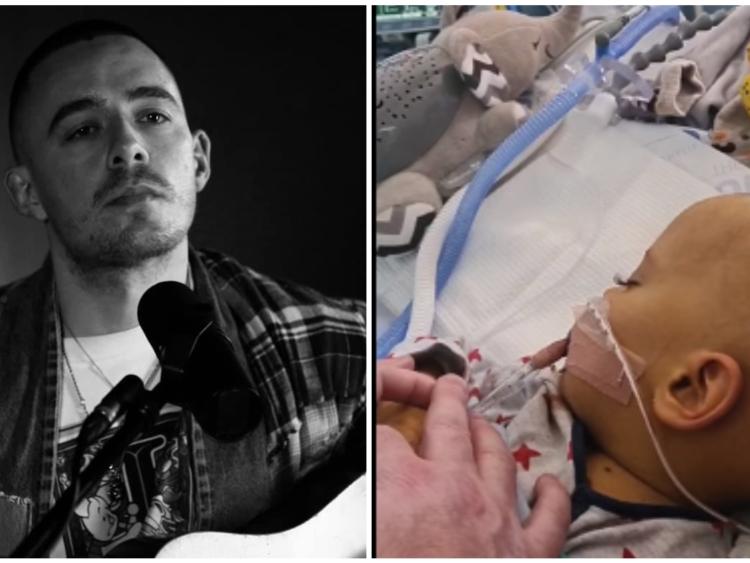 The family of young Daire McDonnell from Edenderry in Co Offaly have reached out to chart-topping singer Dermot Kennedy to pay tribute to their son who is now gravely ill.

The one-year-old was flown to the UK for specialist treatment for a rare bowel disease in October and was told this week he is now not well enough to undergo a further procedure he needs. Dermot Kennedy's song 'Outnumbered' has been effectively the soundtrack of his brave battle.

His parents have played it throughout his treatment in Ireland and the UK while friends and supporters have played the track at various events and vigils held for Daire in the last year and a half.

Daire's parents played the song at Daire's bedside on Thursday night as they comforted their young son in hospital. You can watch the touching moment on the 'Our Amazing Fighter Daire' Facebook page HERE.

Daire was born with multiple atresia of the bowel. He is dependent on total parenteral nutrition (TPN), a form of feeding that bypasses the gastrointestinal tract and has been undergoing treatment since birth.

A side effect of the TPN is that it affects your liver which has led to Daire being diagnosed with liver disease. His condition, combined with other illnesses, is life-threatening.

In recent days, his family posted an update: "Dáire had a fairly okay weekend and we had seen some baby steps of improvement. He opened his eyes, he lifted his arms, pointing his finger and we were hoping the consultant would be happy this morning and I was hoping to get a lovely picture of his arm in air.

"Unfortunately instead our world came crashing in around us. Dáire needs a multi vesicular transplant but he's too ill now to be listed.

"We're heartbroken. There is nothing more that they can do for our little man and we are trying to get him transferred back to Crumlin so his brothers can spend some time with him as our time is very short.

"We are devastated beyond belief. Poor Rian [brother] knows something is wrong with Dáire we don't know how we will break this to him."

Daire is being transferred back to Crumlin today [Friday, March 26] to spend time with his brother.

In an update on Thursday night, his parents said: "We have the most amazing little boy. Our baby has been through the wars and has endured more than many adults. I wouldn't wish this on my worst enemy. We thankfully are getting our baby back to Crumlin tomorrow [Friday].

"Dermot Kennedy's Outnumbered has always been his song and always will be. He will always be our amazing little fighter and he's still fighting so we won't give up yet. We just hope and pray for a miracle."

It would mean the world to Daire's family if somehow his story could reach Dermot Kennedy and that he could send a message or tribute to him.