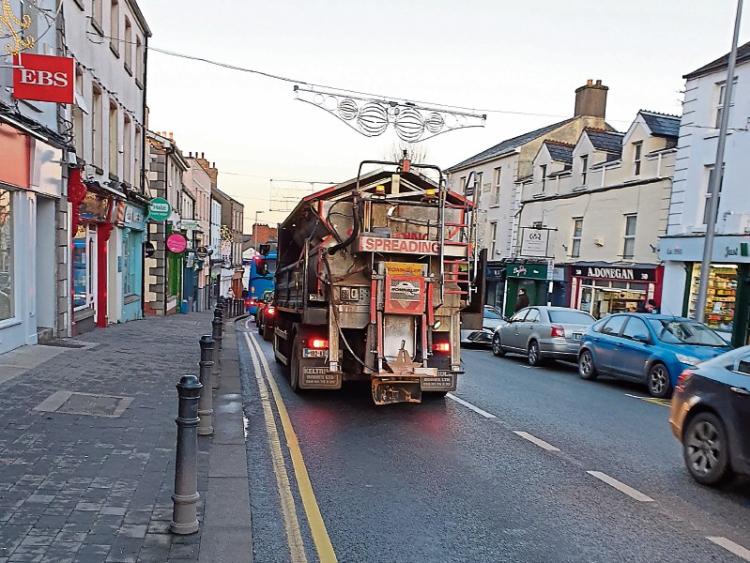 A gritter on the streets of Naas

Kildare County Council is coming under pressure to tackle icy footpaths in Naas.

Cllr Bill Clear asked that footpaths be gritted when the temperatures falls below freezing.

He said he was particularly concerned about the consequences of an elderly resident falling because it will likely result in a fracture.

He said the paths were dangerous recently when the temperature went below zero for a few days in a row. “Footpaths need to be cleared for vulnerable users especially when they remain frozen during the day.”

Cllr Seamie Moore pointed out that historically every shopkeeper in the town was obligated to keep footpaths clear outside their premises — but now most premises are not owner occupied but leased out.

Cllr Fintan Brett said the council should consider salting the main street at a slower pace because this would result in more material being sprayed onto the adjacent pavements.

However, KCC said that the salting of routes is done in accordance with the 2020/2021 winter maintenance plan and it is always the council’s policy to attempt to maintain the principal roads within the county to keep these open for traffic and free from ice.

A significant number of roads in the Naas area are included in this programme.

The councillors were told that the available resources are “at full capacity” and “the gritting of footpaths in the town centre will be considered when resources allow”. KCC also said that all routes outlined in the plan are salted.

This followed a query from Cllr Evie Sammon who said that while KCC’s resources are under pressure, cooperation could be sought with neighbouring local authorities to have them use their machinery to salt roads in border areas.