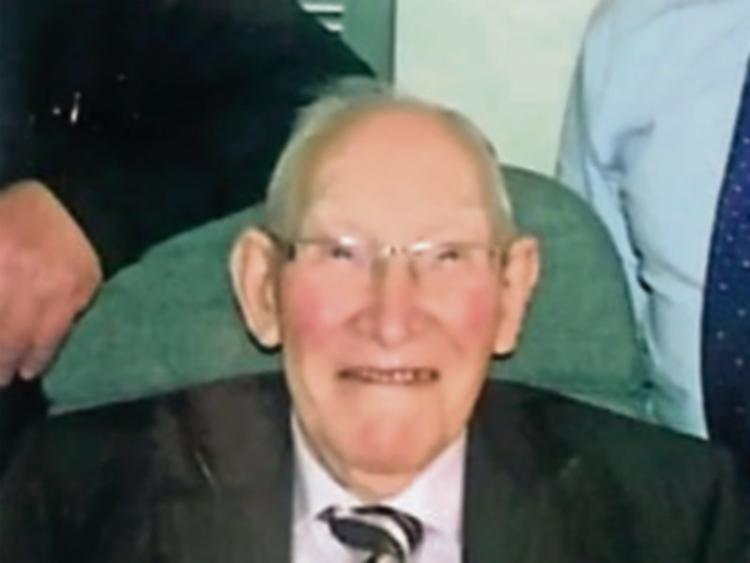 Members of Rathangan Credit Union provided a poignant guard of honour outside the Church of the Assumption in Rathangan on Friday, January 29, to say farewell to their good friend William (Bill).

The last of the financial institution’s founding members to be laid to rest, the hearse paused outside the building in recognition of the many years of service given by the Sheane man.

Earlier, his nephew, Liam Swords told the small (due to Covid-19 regulations) crowd gathered in the church that Bill’s family were hugely grateful for all the kind words of condolence expressed by his uncle’s many friends and colleagues since his passing.

Liam recounted some of the messages they received describing Bill as one of life’s true gentlemen.

Others said it was a privilege to have known him. He was described as being “so kind and so caring”, “a very learned man”, and “a man with a huge interest and passion for the community and the affairs of his parish”.

“It was an honour to have known Bill, Bill was one of Rathangan’s greatest,” — these were just some of the wonderful tributes to Bill,” said Liam.

“On a personal level, Bill was always Uncle Bill to us,” he said.

“He had a fantastic sense of humour and had a great laugh.”

Liam recalled how Bill would start to chuckle before he got to the punchline of the story, knowing what was coming next.

“He was very well versed in current affairs, politics and sport — rugby was his absolute passion.

“Bill had great style and he was always impeccably dressed,” he added.

Those in attendance heard how he had a flair for figures.

“He was so proud to be part of Rathangan Credit Union and he made many good friends there,” said Liam.

He spoke of how Bill and his late wife Mary had no children of their own, but they loved Liam’s family as if they were their own children and were always interested in how they were getting on. He said they had huge hearts and always had time for friend’s neighbours’ children as well.

Bill was always asking how all the nieces and nephews were getting on and was always on hand to give sound advice if needed.

Liam thanked St Luke’s Hospital for caring for Bill for a period in 2019. He also praised Beechpark Nursing Home who looked after him so well over the past 18 months.

He also signaled out Rose Martin for her support and for being such a treasured friend to Bill over the years.

He thanked Bill’s neighbours, particularly Karl Murphy and his close friend Vi, who always kept in touch with Bill.

Fr Bill noted how the word “gentleman” was frequently mentioned in the messages of support sent to the family. He described Bill as wise, astute and gifted. He said that often people who were clever, may not be good in a social sense or visa versa, but Bill was well equipped for both scenarios.

Fr Bill said Bill was a man of faith, a presence in the church, a man of stature, always willing to give help, trustworthy and a pillar of the community.

Fr Bill said Bill’s good friend Rose remarked on Bill’s talent in writing an appreciation. “He was a wonderful scribe,” she said.

Fr Bill asked the congregation to pray for Bill, his wife Mary and all the deceased founders of the Credit Union. As Bill was taken to his final resting place in St Patrick’s Cemetery, Declan Aungier played the Marino Waltz —a nod to the many years Bill worked in Bord na Móna. Bill passed away on January 27 peacefully in the loving care of all the staff in Beechpark Nursing Home, Dunmurray. Bill will be sadly missed by his brother-in-law William Swords, nephews Liam, Tyrone and Rory, nieces Catherine and Margaret, extended family, neighbours and many good friends.