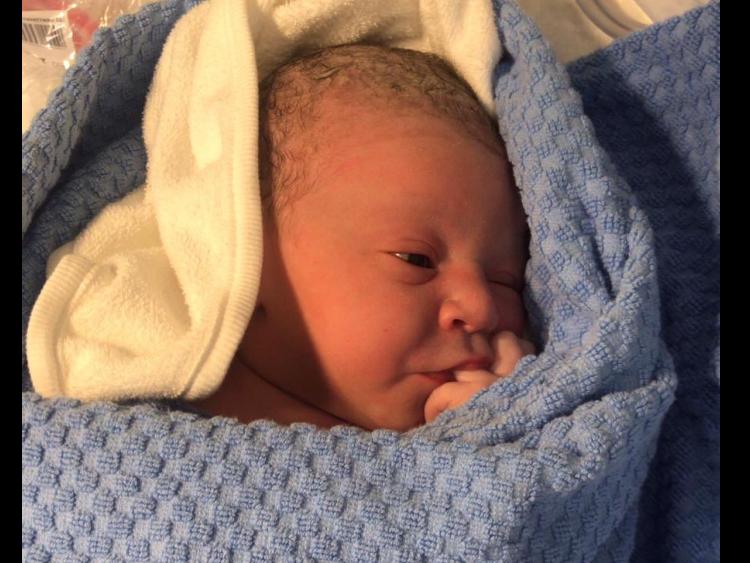 The baby girl who made a premature entrance to the world will likely arrive home tomorrow.

An ambulance crew from Edenderry were under the pump on Wednesday as they were tasked with delivering a baby near a petrol station.

The  crew responded to the scene close to the Applegreen Service Station in Caragh, outside Naas, where expectant mother Naomi had unexpectedly gone into labour.

Baby Ellie was delivered at around 6pm on Wednesday, February 3.

At the time dad John Feane, 32, a native of Prosperous, was driving partner and Clane native Naomi Galvin 27, from their Coill Dubh home to The Coombe Hospital in Dublin.

But matters developed at a faster pace than expected.

"Naomi went from making the noises you'd expect from a woman with an advanced pregnancy to full on screaming and saying 'I need pain relief now'," he recalled.

It was cold, wet and dark when he pulled in on the Naas side of Caragh close to the filling statoin  and contacted the emergency services.

"I wanted to be visible and the area was lit up so once the ambulance personnel had an eircode, they'd be able to get to us as soon as possible," said John.

"By the time Richard arrived, it was pretty much go time," said John.

Meanwhile John was receiving advice by phone and he had towels prepared and laces removed.

A healthcare assistance by profession and a qualified emergency medical technician, who works voluntarily with the Irish Red Cross, John has some knowledge and his partner was in good hands.

"John was assisting Naomi as best he could and I got there in the nick of time," said Richard.

Richard arrived at the scene a little after 6pm and was joined by another paramedic.

"We had plenty of hands at that stage," added Richard and Ellie was born within about 15 minutes in the front seat of the couple's Nissan Qashqai.

"She arrived all bells and whistles," said John.

Ellie was immediately brought to the warmer ambulance to be assessed immediately before being transported with her mum to The Coombe.

Naomi was taken first to the delivery suite and later to a ward and because of Covid-19 restrictions John had to leave after about half an hour.

"It was a little upsetting - but we have to keep frontline staff safe. We want to thank the ambulance service staff and the staff at the hospital," he said.

When Naomi arrives home she'll meet brothers Philip 8,  Ruairí 5 and one year old Lorcan in a very busy home that's about to get busier. And she'll also meet sister Molly, who's three.

Ruairí joined Philip as a pupil at Coill Dubh National School when he went into junior infants last year.