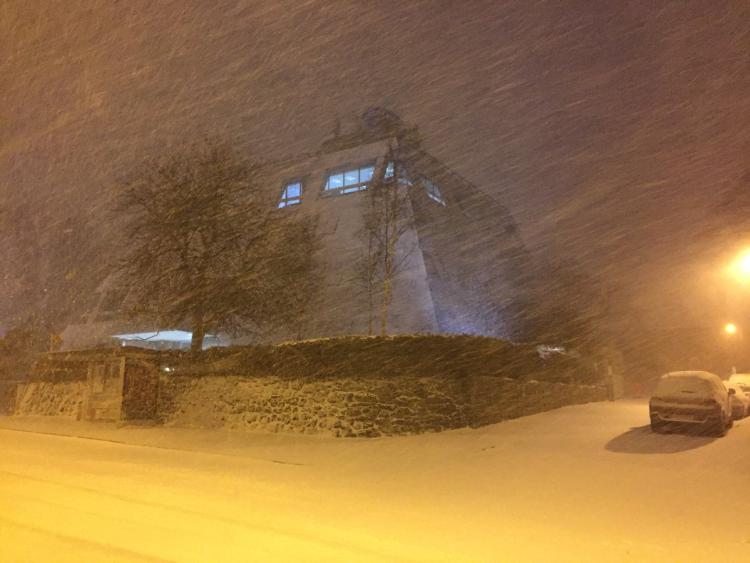 Met Éireann expects the cold snap, which has covered Ireland with snow, is set to last through the rest of the weekend but is forecasting a change in the coming days.

The forecaster says Sunday will remain cold with snow in some areas and more wintry showers accumulating on what fell overnight. While the wintry showers will become isolated as the day goes on temperatures will rise no higher than 4 degrees though the sun will break through in some parts.

A bitterly cold night will follow with temperatures dipping to as low as -5 degrees causing a severe frost.

Rain or sleet will mix with dry and bright weather on Monday as temperatures start to rise.

Met Éireann forecasts an end to the cold snap on Tuesday with milder but more unsettled conditions will set in for the rest of the week with stormy conditions at times with gales in the forecast.

Tuesday to Friday will be very wet, with heavy widespread rain at times with a risk of localised flooding possible due to saturated ground conditions warns Met Éireann in its farming forecast.

Our Atlantic chart shows precipitation and pressure forecast in 6 hour intervals for the next 10 days. https://t.co/9Giuj4CR5m
The national forecast and the outlook for the coming days available here. https://t.co/9gKN6SVok4 pic.twitter.com/zfdSh7OlTs

MET ÉIREANN NATIONAL FORECAST issued at 5.10am on Sunday, January 24

SUNDAY
A cold and icy start with snow lying in some areas leading to hazardous conditions. Wintry showers will continue through the morning with further accumulations possible. Showers will become more isolated by afternoon with some sunny spells developing. Highest afternoon temperatures of just 1 to 4 degrees in mostly moderate northerly or variable breezes.

Wintry showers will become mainly confined to the northwest overnight. Skies will clear elsewhere to leave a mostly dry night with widespread frost and icy patches forming. Pockets of fog and a sharp to severe ground frost will develop with lowest temperatures of 0 to -5 degrees. Light westerly winds will back southwesterly and increase moderate to fresh by morning.

MONDAY
Monday will see further showers, mainly of rain or sleet mixed with dry and bright intervals. Highest temperatures of 3 to 7 degrees in a moderate to fresh southwest wind easing light to moderate westerly by evening.

Becoming mostly overcast with a persistent spell of rain overnight, possibly preceded by sleet for a time, in the west overnight. Lowest temperatures of -3 to 0 degrees early in the night with frost in places in light to moderate southerly breezes.

Tuesday: Rain spreading to all areas during the morning, turning to sleet or snow at times over higher ground. A clearance to showers and occasional bright spells will follow from the southwest in the afternoon. After a cool start it will become milder from the south with afternoon highs of 6 to 10 degrees, remaining cooler in Ulster however with highs of just 1 to 4 degrees. Moderate southeasterly winds will ease mostly light before veering westerly later in the day.

Becoming dry for a time early in the night before another spell of rain arrives in the southwest towards dawn. Winds will be light to moderate southerly or variable allowing some fog patches to form. Lowest temperatures of 5 to 8 degrees generally, colder in Ulster however with lows of 1 to 4 degrees.

Wednesday: Mostly overcast with rain spreading to all areas Wednesday morning and becoming heavy at times bringing the risk of spot flooding. Highest temperatures of 7 to 11 degrees, holding a degree or two cooler in Ulster in moderate to fresh southeast winds.

Rain will move northeastwards overnight with frequent showers following from the southwest. Light to moderate southeasterly breezes will veer westerly and increase moderate to fresh, becoming strong to gale force for a time along southwest coasts. Lowest temperatures of 5 to 9 degrees.

Thursday: Partly cloudy in most areas to start with a band of rain in the northeast clearing in the morning to sunny spells and showers for a time before further rain spreads from the southwest during the afternoon. Highs of 8 to 12 degrees in moderate to fresh westerly winds backing southerly and easing light to moderate in the afternoon.

Further Outlook: Continuing mild and unsettled for Friday and the weekend with wet and windy conditions at times.