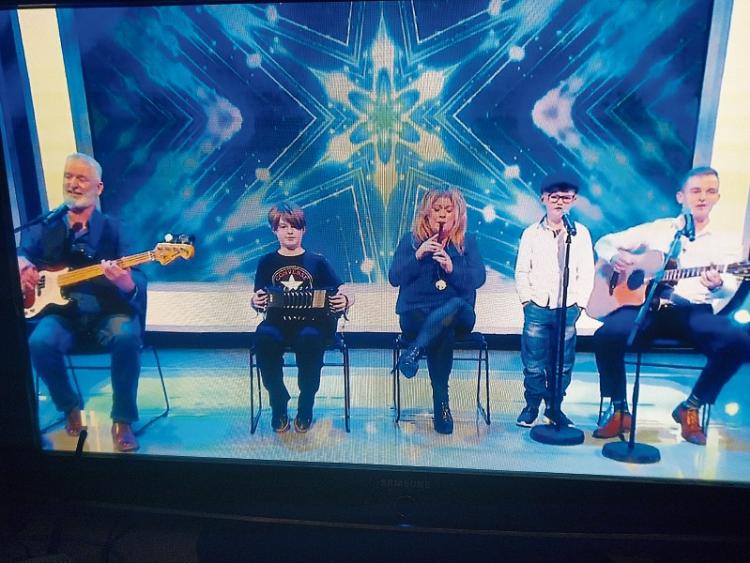 A Naas group will take part in a television programme featuring some of the most talented musical families in the country.

The McCabe family featured on the TG4’s Realta agus Gaolta, the search for Ireland’s most talented family and will perform on a programme to be broadcast on December 13 at 8.30pm.

The group is made up of Tony McCabe, son Dan and Finn (8), daughter Róisín (10) and step mum Carmel.

”We’re really looking forward to it and we've put in an amount of work and preparation to get this far. We’ll be singing Come My Little Son, written by Dan,” said Tony, who will be known to a slightly older cohort of music fans as a member of Pluck the Duck.

Pluck the Duck was a four piece locally based Irish ballad band.

They performed throughout the country and across the UK.

And they regularly travelled in the milk van owned by Caragh’s Gerry Cassidy, who doubled as the band’s sound technician and stage assembly man.

Meanwhile Dan seems to have inherited the family’s musical genes.

He picked up his first guitar chord from Carmel and is something of an internet sensation thanks to his evocative of many well known Irish songs.

The former Naas CBS student performed at numerous venues including in Naas before Covid-19 put an end to live music events far and wide.

Dan is also known locally in another capacity — he has also worked part time as a nurse’s aid in Naas General Hospital.

He has built up an audience from far and wide, including abroad and his youtube page has had over a million views.

He has also written half a dozen of his own songs which will become part of his repertoire.

Like many artists, Dan has taken to performing on social network channels and has gained nearly 20 million views of the material he has shared.

He has had a million views on his YouTube channel.