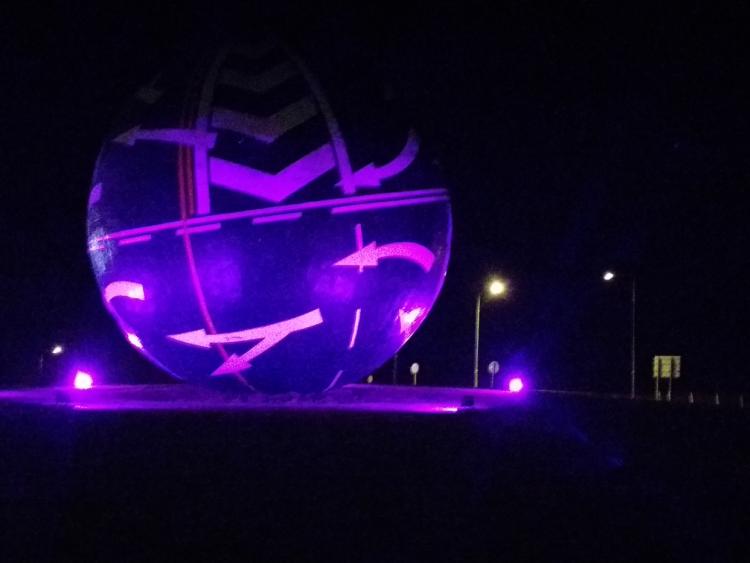 A number of well known structures across County Kildare will be flooded in purple light to mark  International Day of Persons With Disabilities on Thursday.

The buildings will turn purple in a salute to 643,131 people in Ireland, (over 13% of the population) who live with a disability. Some of the participating landmarks will include  Aras Chill Dara,  Newbridge town hall, the  Maynooth College spire, Maynooth University campus building, the big ball in Naas, Maynooth rail station and Leixlip’s wonderful barn.

The day is an annual occasion designated to join together to support people with disability in the community and to raise awareness of the importance of creating a future wherevpeople with disabilities experience equal opportunity and face no barriers in all aspects of their lives.

The theme of this year’s International Day of Persons with Disabilities is “Not All Disabilities Are Visible” which focuses on spreading awareness and understanding of disabilities that are not immediately apparent, such as mental illness, chronic pain or fatigue, sight or hearing impairments, diabetes, brain injuries, neurological disorders, learning differences and cognitive dysfunctions, among others.

According to the WHO World Report on Disability, 15% of the world’s population, or more than 1 billion people, are living with disability. Of this number, it’s estimated 450 million are living with a mental or neurological condition and two-thirds of these people will not seek professional medical help, largely due to stigma, discrimination and neglect.

Another 69 million individuals are estimated to sustain Traumatic Brain Injuries each year worldwide, while 1 in 160 children are identified as on the autism spectrum.

These are just some examples of the millions of people currently living with a disability that is not immediately apparent, and a reminder of the importance of removing barriers for all people living with disability, both visible and invisible.

During the COVID-19 pandemic, isolation, disconnect, disrupted routines and diminished services have greatly impacted the lives and mental well-being of people with disabilities right around the world. Spreading awareness of invisible disabilities, as well as these potentially detrimental and not always immediately apparent impacts to mental health, is crucial as the world continues to fight against the virus.

Kildare County Council in partnership with County Kildare Access Network (CKAN) have organised a number of events to mark the day and to raise awareness across our own community.

CKAN is a network of individuals made up of representatives from the 5 local access groups in County Kildare and organisations working towards making County Kildare inclusive and fully accessible to all.

Landmark buildings will be flooded in purple lights in a salute to 643,131 people in Ireland, (over 13% of the population) who live with a disability.As not everyone will be in a position to turn a landmark purple, other ways to mark the event could include wearing a piece of purple clothing or decorating your premises/shop front windows in purple.