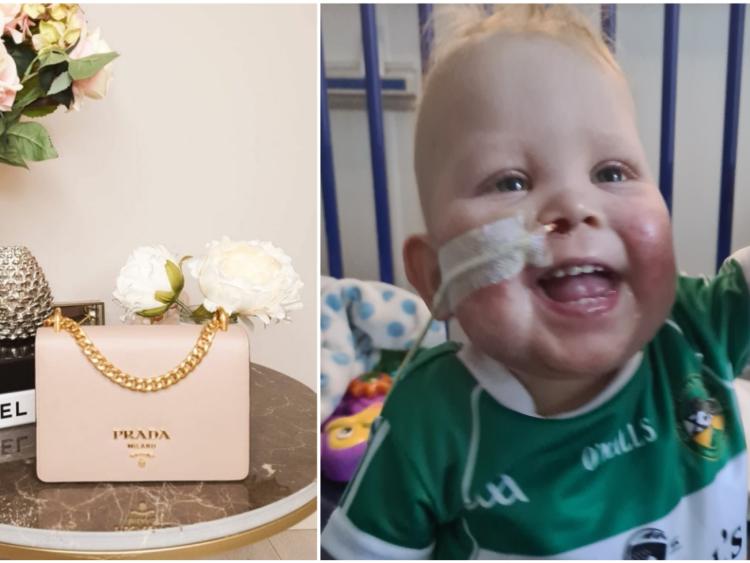 An Carbury-based blogger has launched a fundraiser prize giveaway to help a local boy get life-saving treatment.

Arlene Costello from The Style Flamingos Instagram page launched a competition to win a Prada handbag worth almost €1,000 for just €5 in aid of little Daire McDonnell from her hometown in Edenderry.

One-year-old Daire was flown to Newcastle by the Irish Air Corps last month after being deemed a match for a potentially life-saving stem cell transplant. He is still in the UK receiving treatment.

A GoFundMe page was established last year to help the young Edenderry boy who has undergone multiple surgeries since he was born in the summer of 2019. Little Daire was born with multiple atresia of the bowel. He is dependent on total parenteral nutrition (TPN), a form of feeding that bypasses the gastrointestinal tract.

A side effect from the TPN is that it affects your liver which has led to Daire being diagnosed with liver disease. His condition, combined with other illnesses, is life-threatening. A hospital in Birmingham specialises in his condition and the hope is to get him there for a rare bowel and liver transplant.

The funds raised through the GoFundMe page will be used for travel expenses for Daire and the family and ongoing medical expenses.

A target of €50,000 has been set on the fundraiser and with hundreds of entries already received in the Prada bag competition, it is edging closer to that total. The fundraiser has jumped by over €3,000 since last Friday when the competition was launched. It stands at €48,650 as of November 24.

Arlene, who now lives in Carbury, explained how she got involved with the fundraiser: "Daire's aunty Orna got in touch with me a few weeks ago, asking me to share the story on my Instagram. I was so heartbroken reading this local little boy's sad story, I had to do something to help them to raise more funds. As a mammy, I can't even begin to imagine what this family are going through so I decided to use my platform on Instagram to get the word out there.

"I have launched a designer handbag giveaway on my Instagram in hope that I can help the McDonnell family to reach their target amount of €50,000 on their GoFundMe page. We are asking people to donate a minimum of €5 and comment on the post to be in with a chance of winning the Prada bag.

"I honestly hope this giveaway will help make a difference, spread the word and raise much-needed funds to help Daire, a true fighter, to get well again and come home soon," Arlene concluded.

YOU CAN STILL DONATE HERE. You can also find Arlene's competition post HERE on her Instagram page.