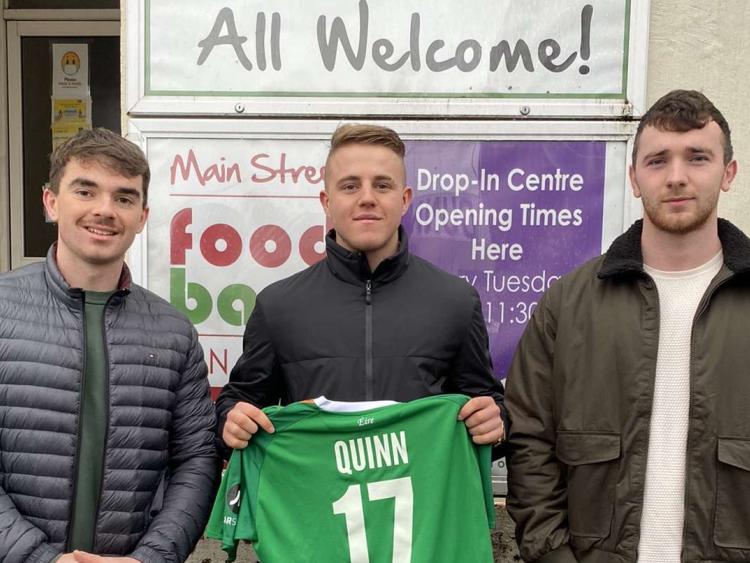 Cian Smith, Robert Hynes and Robert Garvey withthe Niall Quinn which will be raffled off in aid of the Naas Food Bank

Three Naas friends are issuing a call out to their local community to get involved in a virtual 5km run or a 3km walk in aid of Naas Food Bank.

Cian Smith, Robert Hynes and Robert Garvey are all studying Business and Management at TU Dublin, Aungier Street. As part of their course, the students had to organise a challenge.

Cian, who hails from Hollywood Park, chose a charity to support, which was a cause very close to his heart.

“We decided to do a charity 5km run and a 3km walk in aid of the food bank in Naas,” said Cian, “ I have been volunteering there over the last couple of years. They do tremendous work.

“We said we have to do this for a local cause. The big charities, they do great work but I thought we should do it for a local charity. You would not believe how many people use the food bank in Naas. You could have a family who might be working away but could be up to their eyes with their mortgage. You just don't know what situation people may be in.”

Cian explained that anyone can avail of the food bank.

Bags of non perishable food are given out to families every week and coming up to Christmas, many more families can come under pressure.

The three students also have three signed jerseys to raffle - one from Niall Quinn's soccer days, a signed Leinster rugby jersey and a current signed Irish soccer jersey.  All the money raised will go directly towards the food bank.

“The idea is to make people aware of the work the food bank does and raise some funds for them,” he said.

Cian also said he has got excellent support from Naas CBS and his former teachers.

Non perishable food can also be donated to the food bank at the old Dara Cinema.