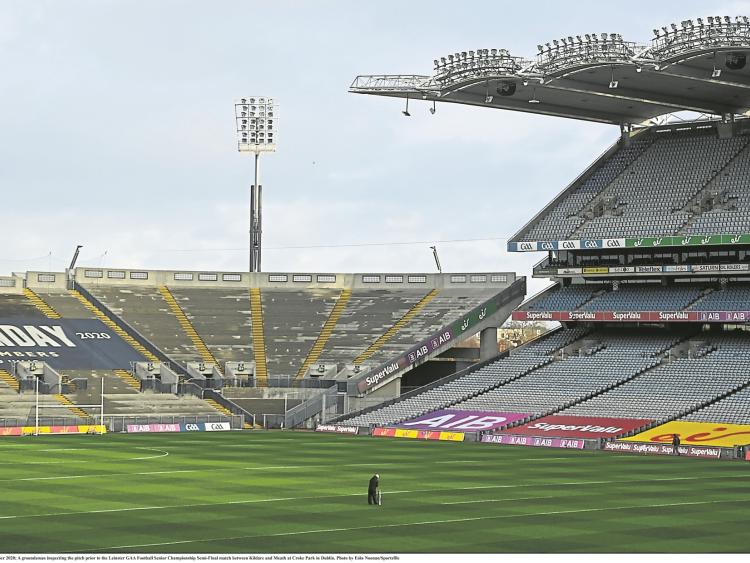 No doubt the keyboard worriers will be having a field day following another shattering defeat for Kildare footballers (thankfully I gave up reading such rubbish a long time ago).
I have to say though it was one of the strangest days I have ever put in in Croke Park; from driving up — all alone — waved through four different road blocks manned by boys and girls in high viz jackets with black face masks (reminded me of the old cowboy films, black and white cowboy films, we use to go to most Sunday afternoons in the cinema in Naas).
Heading straight into Croker; no beverages; filling out questionnaires and signing forms to say your are feeling fine, no I have no temperature today or in the last few days; no I have not been in close contact (as far as I know) with a person with covet; no I have not had covit (as far as I know) and so on and so forth.
Into the press area and an empty stadium; strange or what.
Word filtered through a few changes on Kildare line-up; three, a bit of a surprise, along with a dose of positional changes; scratch the head, wondered if there were any injuries but it seemed not.
Away we go.
If anything the strange feeling gets even stranger as the cat and mouse game is played on a surface that looks in exquisite condition.
Early lead for The Lilies, three ahead, but soon level.
Where we are situated is a fair bit up from the playing surface but it certainly did not stop us hearing Ross Glavin giving out instructions from the word go.
Few things change.
Opening 15 or 20 minutes fairly even before Kildare begin to get a grip. New midfield pairing (Shea Ryan and Kevin Feely) on top; defence looking comfortable, all contributing well.
Forwards playing keep ball in patient build-up; pushing up on the Meath kick-out, effectively and fruitfully.
Slowly but surely the points begin to come, the gap begins to open. Jimmy Hyland causing problems; Darragh Kirwan after a nervous start settles and scores; Paddy Brophy all over the field; Ben McCormack running at defenders; Fergal Conway using his power and strength; Mattie Byrne slowly getting into it.
Still level after 25 minutes.
Finally Lilies begin to show their dominance on the score board, Brophy, Kirwan leave two in it.
A golden goal chance goes abegging but at least Kevin Flynn raises white; Jimmy gets a mark; Kirwan gets his second before The Larks man leaves six in it.
Half time.
Very satisfying; very comfortable; all to a man doing well; only concern there should be eight maybe even ten in it.
Resumption and we are hardly two minutes in and the Kildare net is bulging.
Good response with a point.
Another in our onion sack.
Another decent response.
Another in the sack followed by a white flag.
Hard to believe.
From six in front to two down.
But again, a really good response.
Captain Hyland and Big Daniel has us all aboard again.
Even Stephen.
All to play for.
Royals edge ahead.
Disaster at the back, a slip, lost possession, another goal; a quick point.
The response we hoped for is not there.
The legs are gone and The Royals tails are up, stay up and they run out winners by nine.
No way are they nine better but it matters little.
At the end of the day they lasted the pace better but yet ...
Yes when you consider three goals handed on a plate; but once they saw sight of line went for it.
End result not a fair refection of the game.
Not by a country mile.
Mistakes were made, and punished, and rightly so.
But there are still positives.
And a lot of positives to be taken, despite the result, in these crazy days.
One gets the feeling that Jack O'Connor knows that too; he said it was a game like few others.
Kildare scored 15 times; Meath 14.

If The Donald Lad was a Lily he would be declaring victory.

But the rest of us live in the real world.
Still the stats are not pretty, for both Kildare and Meath.
Little to do with Jack O'Connor or Andy McEntee.
Kildare have now won just one game in Croke Park in their last 14 appearances.
While Meath have still not beaten a Division 1 — in league or championship — since 2014.
I cod you not.
Is the gap widening even more in Leinster?
With Dublin dominating the answer is of course it has over the last number of years.
Whether it continues to expand we will know more about that come next Saturday evening.
But one thing is for sure, the gap between Meath and Kildare is not nine points or anything like it.
Disappointing?
Dead right it is.
Very disappointing.
But let's not lose the run of ourselves here.
And while I am still trying to get one Ross Glavin's voice out of my head, but in the times we are in, I firmly believe we should be thanking those lads for their efforts over the last six or eight weeks.
No rewards for sure.
But we are used to that.
And with no Billy Dunne in attendance (I think) we were always going to be up against it.
But who knows what's around the corner.
Keep the faith.
And, above all, keep safe!