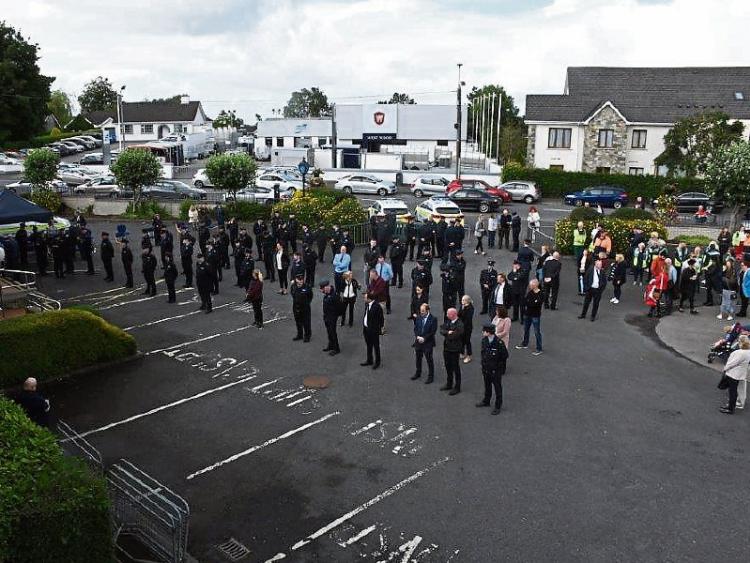 The ceremony was timed for noon to coincide with the funeral of Det Gda Horkan, 49, at St. James’ Church, Charlestown, Co Mayo.

About 300 people attended, mainly serving and retired gardaí along with emergency services personnel and members of the public, including children. They observed a minute's silence.

Supt Oliver Henry paid tribute to the dedication of Gda Horkan and expressed sympathy on behalf of locally based personnel to his grieving family - father Marty, sister Deirdre and brothers Aiden, Brendan, Dermot and Padraig.

Naas parish priest Fr Liam Morgan said it was a privilege to be asked to be there.

Extending sympathy to the family of Gda Horkan, he said those present would also be mindful of the families of all serving gardaí because “they carry an unspoken anxiety that their loved ones will return safely.”

Referring to the shooting incident Fr Morgan said: “Our brother was suddenly and violently taken from us. However, God will come to his aid and show him love and forgiveness.”

He said Gda Horkan was steeped in his community, he served with distinction as a garda and was proud to wear the uniform.

Rev Philip Heak, of the Naas St David Church of Ireland parish, said the CoI community and the wider community remember Gda Horkan and are thinking of his family .

Quoting from Paul’s First Epistle  to the Corinthians, he said love is patient and kind and keeps no memory of wrongs.

“Love does not delight in evil but rejoices with the truth. It always protects, always trusts, always hopes, always perseveres.”

Addressing the gardai working in Naas, he said “may you and all of the emergency services  be protected and blessed in your work.”

The ceremony concluded with the playing of the Last Post by Gda Dave Prendergast.