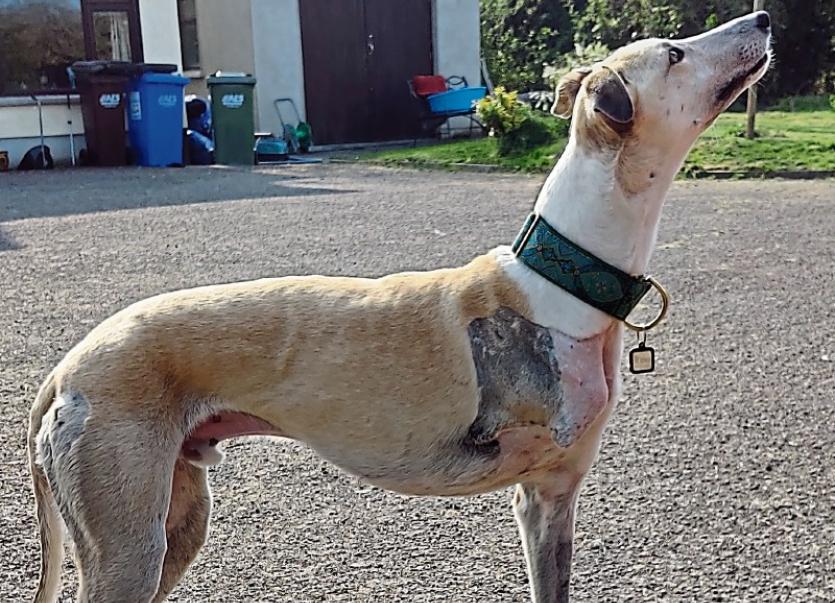 Paddy the lurcher now has just three legs, but has found a happy home

Paddy, a lurcher who was found in Maynooth about seven weeks ago with a serious leg injury, has found his forever home.

Paddy’s injury was so severe that he had to have his leg amputated and as he was weak and very malnourished, it was touch and go whether he would survive the operation.

But Paddy was a real fighter, and came through the surgery successfully. After a few days in the vets, he went to be cared for in a super foster home.

He began to recover quite quickly and he was such a good patient and got on so well with the household and their other dogs that he has been adopted by his foster home and will stay there now for the rest of his life.

He has been renamed Patrick.

UPDATE ON OUR NEW BORN KITTENS

One of the KWWSPCA’s volunteer animal welfare officers has been caring for seven very young kittens — all of which had been found abandoned; two in Monasterevin and five in two different places in Athy.

The ones found in Monasterevin were only just born. Unfortunately, two of the seven kittens did not survive more than three weeks, but the other five are fit and healthy and doing well in their foster home, where they are being hand reared. We hope this continues and that the kittens will be ready for rehoming at the end of May when they are fully vaccinated.

Details about the kittens and how they can be adopted will be posted on the KWWSPCA website and on its Facebook page.

DONATIONS TO NOAH’S ARK, THE KWWSPCA CHARITY SHOP IN NEWBRIDGE

Noah’s Ark, the KWWSPCA Charity Shop in Newbridge, has been closed since the 13 March due to the Covid-19 restrictions. With so many people at home doing their ‘spring cleaning’, we expect there will be lots of donations made to charity shops and the KWWSPCA’s Noah’s Ark would be delighted to have some of them.

When restrictions are lifted, we can take small donations into the shop but no more than one or two small bags as it is so small and has restricted storage space.

Larger donations can be taken to our Shelter near Athgarvan by appointment — call 086 3413017 or 087 6803295 — where there is lots of parking and donated items can easily be sorted and stored.

Just a reminder that we cannot sell pillows, duvets, sheets, pillow cases, cushion covers, any items that are damaged or broken, toys or electrical good.

KILDARE & WEST WICKLOW SOCIETY FOR THE PREVENTION OF CRUELTY TO ANIMALS

The Kildare & West Wicklow Society for the Prevention of Cruelty to Animals (KWWSPCA) is a Registered Charity which investigates and deals with reports of cruelty and neglect to animals; family pets, wild animals and birds, and horses, ponies and donkeys, throughout County Kildare and West Wicklow.