Amazon doesn’t need you... but our towns in County Kildare do 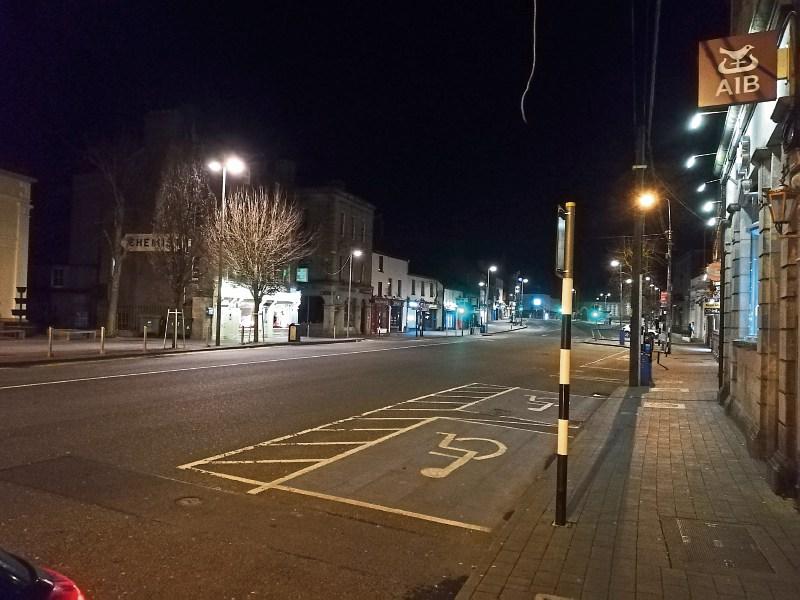 An empty Naas town at night during the Covid-19 crisis. Image: James Durney

Amazon doesn't need you; Naas does. The coronavirus has no endearing qualities but the response of the community to those worst affected by its impact gives us hope, even inspiration.

Across the water, 99 year old Tom Moore did laps of his garden and raised £25m for the National Health Service in the UK.

This was a story that had everything for the British media. They love to honour those who took part in wars.

But the man captured the imagination and had to wait until almost his 100th birthday to become a genuine hero. You have to love him.

On a much smaller scale locally much good work is being done to help those who have to stay at home, cannot attend medical appointments, are lonely or just badly off.

This effort is being coordinated by Kildare County Council and the local authority too deserves much credit for its efforts to ensure that the deleterious impact on the community is eased and managed as best as it can be.

There are other groups too.

There are too many to mention but include Naas GAA and Civil Defence as well as individuals either helping out in a practical way through human contact or by donating money at a time when unemployment, hopefully temporarily, has risen as fast economic activity has shrunken.

And, of course, we have Elizabeth Kenny from Clane. Lizzie didn’t fight any wars that we know of but she’s made of strong stuff.

The amount generated by her fundraising laps of the patio is now well north of €4,000.

The money will help the Naas Care of the Aged centre at Newbridge road but the real value of what she did was to get us thinking about other people and to help forge a wider community spirit. When we read about people like Elizabeth Kenny we know we’re not alone.

There will be an end to this and it can't come soon enough.

The economy will improve because it always does and it was in a strong position before the virus arrived. Naas town centre will survive too but it would help if we all helped.

There is much to like about the town centre. It has some of the finest buildings, like the bank, premises and Town Hall of any town anywhere. But its traders have been buffeted by one gale after another.

First the shopping centre in Monread opened and then we had economic collapse; neither of which were the fault of fhe traders in Naas. Now they have to deal with the virus.

If we want a town centre in Naas we have to support the businesses there.

Many of the businesses there are unique and enough of those brave souls who open business — and yes, even if it’s another coffee shop — need support .

And it’s not a call for charity because if business is not viable they die and the disappearance of enterprises from the middle of the town diminishes us all.

There are many fine businesses in the town and — pre coronavirus — the town had a healthy nightlife (for which it won an award).

Again there are too many good businesses to mention but one of these is Barker & Jones, another is Lawlor’s Hotel or the Lemongrass restaurant.

B & J is more than a bookshop, it sells all manner of things including obscure publications.

It is a beautiful place and its unique view of part of the town from the front upstairs window is a design charm.

Places like Barker & Jones deserve to prosper. They are more like places to go than commercial enterprises.

If it’s a straight question between soulless concepts like Amazon or a some place like Barker & Jones, there’s only one answer.