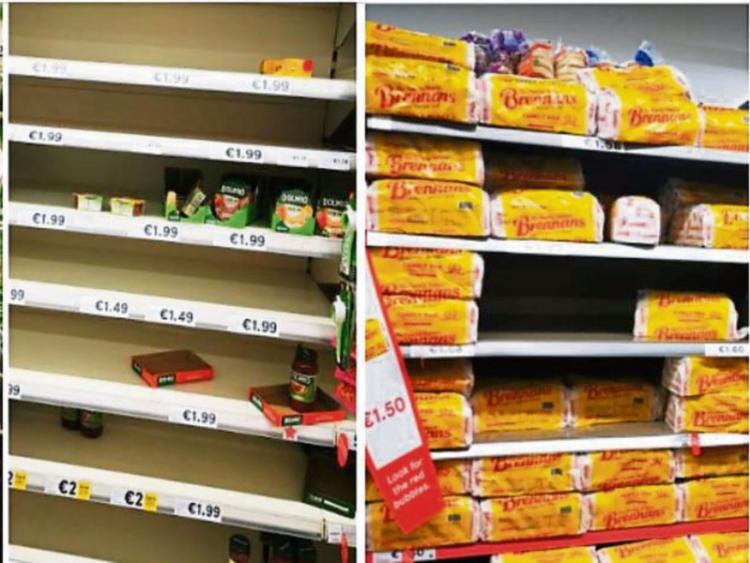 Shelves had been bare after the first wave of panic buying, but there was plenty of bread at Tesco Newbridge on Sunday last. Pictures: Aishling Conway

Social media was rife last week with videos and photos depicting shoppers lined along the aisles of large retail outlets across Co Kildare. This followed Taoiseach Leo Varadkar’s first press briefing on ‘social distancing’, in response to the spread of Covid-19 across Ireland, with the first death from coronavirus recorded at Naas General Hospital on Wednesday, March 11.

The demand for toilet paper, santising gels and soaps, plastic gloves, and perishable goods seemed to be high on shoppers’ lists as a spate of panic buying ensued. However, retailer Andrew Cross told the Leinster Leader he didn’t feel last Thursday’s shopping spree should be described as ‘panic buying’.

“Customers at Cross’s SuperValu Newbridge were in good spirits and I saw no one fighting over bread or provisions. After the government’s announcements of the closure of schools and creches, of course, the spend was vastly increased. I would compare it to a good Christmas Eve.

“But instead of ‘panic buying’, I’d call it sensible shopping. People came in quickly — knowing their children would be home for the foreseeable weeks — to buy non-perishable goods. They bought goods that could be sustained in case of further curtailments.

“Goods such as toilet paper, pasta, rice, etc were in demand. On Thursday, we closed the Newbridge store at 8pm so could re- stock the shelves and be in better shape on Friday morning. It’s business as usual since, let there be no panic,” he said. “Goods are being re-stocked on an ongoing basis”.

Both Cross’s SuperValu store in Newbridge and Cross’s Centra Kilcullen experienced an increase in trade similar to a Christmas Eve spend with the Centra store in Naas also experiencing a large spike in trade.

Tesco, with outlets in Naas, Monread, Newbridge, Kilcock, Clane, Celbridge, Maynooth and Kildare town stated: “We’re focused on ensuring the safety of our colleagues, customers and suppliers. We recognise some products are currently in high demand and are working around the clock with our suppliers to restock our stores every day.

“Our stores are open as normal and will continue to be. We ask our customers to keep shopping as they normally would.”

One video shared on news and social media on Thursday, March 12, showed at least 100 people lining the full length of an aisle at Tesco Extra at Monread Naas.

In response to the HSE’s further guidelines, King’s Gala outlets started to operate a hatch service from 10pm last Tuesday. A spokesperson for the company which has outlets in Prosperous, Maganey and Ballylinan said the stores would remain open but serving customers through a hatch. It is advised that people bring a list with them to save time.

“These are challenging times but we will get there in the end and our motto, remember at King’s Gala is ‘We’re always there for you’. Stores are well stocked up so there is no need to panic”.

Meanwhile, Ciaran Conway of Merrins Gala, Naas, stated there was no shortage of food and goods.

“The shortage witnessed last week was as a result of panic buying — warehouses across the country were never more packed with supplies in advance of Brexit. There need not be any panic, the shelves are being restocked quickly and deliveries arriving regularly. So panic buying is totally unnecessary,” he said.

However, he did note that as the situation continues, “it is likely there will be a shortage in some products over the coming weeks, this is only natural”.

“So we must be mindful of elderly people who need supplies. What I am doing is keeping some items such as bread, Dettol and flour behind for those likely to need them most.

Mr Conway said that Merrins Gala, Naas, were hugely aware of the vulnerability of their older customers. “I’ve given our regular elderly customers my mobile here so they can ring and ask for groceries if they run out, and we can deliver to them.”