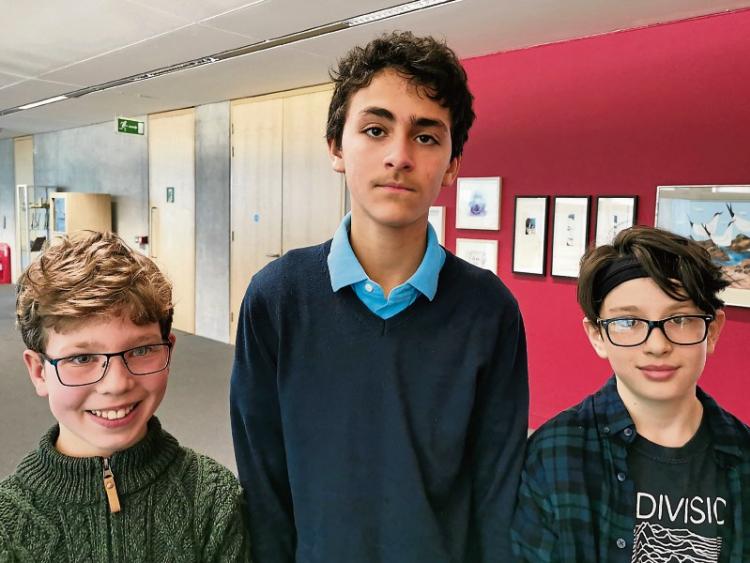 A cinema at the Tesco Carton Park in Maynooth, a litter picking payment scheme and the turning off of lights for an hour in schools are among the proposals which came from Maynooth primary school students who addressed county councillors on March 6.

Orlando Gale-Scourfield, Merowech Stifter and Martynas Karim-Hamza from Maynooth Educate Together school spoke to members of the Clane-Maynooth Municipal District at their monthly meeting in Kildare County Council on March 6.

They made a number of proposals to improve life in Maynooth.

To combat litter they have proposed that we begin a community project, where anyone can collect a biodegradable bag from a small shop, fill it with litter, and return it to earn €5. “If this money was provided by the County Council, it would balance out, as they wouldn’t have to pay any adults to do the jobs themselves. This would help the environment, give people something to do in their spare time, and also get them some extra money.”

The trio also said that new childcare facilities are needed because of new housing in Maynooth.

On electricity, they said it is becoming very expensive and it’s taking a lot of resources to produce. “The solution is simple. If schools across Kildare turned off the electricity for one hour a week, we would save money, power and we should do something instead that doesn’t require electricity like P.E. or art. We should invest some money towards bigger yards and kitchens so we can bake and play.”

They also proposed a two or three screen cinema beside the Range and Tesco. This would encourage a lot of people to go outside, provide some jobs for young people and decrease traffic.

Currently children don’t really have a place to hang out with their friends, they said.

The students said there are “far too many sets of useless traffic lights dotted around Kildare.” The traffic lights beside Maynooth Castle and some others should be replaced with zebra crossings and roundabouts, they argued.

They said Kildare as a community should have more places to enjoy playing football and other such sports. There are rural parts in Kildare, such as Maynooth, where there is no place to freely play sports outside. They called for investment in astro pitches at the Harbour playground “as nobody actually uses the big green near the train station and it is never actually tended to.”

Finally they said there should be more cycle paths in Kildare.

They cited the example of the road out to their school and the gael scoil where there are no cycle paths and it is dangerous for the children to drive on the road with so many cars and there is nowhere near enough space to cycle on the path. “Children have been known to fall onto the road as there is not enough room for them to walk spaciously. This has to change. If we want people to cycle more frequently and use their cars less, then we need to let people be able to actually cycle.”

The three students were congratulated by chairman, Cllr Brendan Weld, and other councillors. Cllr Weld said it was great to see people taking an interest in the society around them.

Merowech, Orlando and Martynas received applause from the councillors.