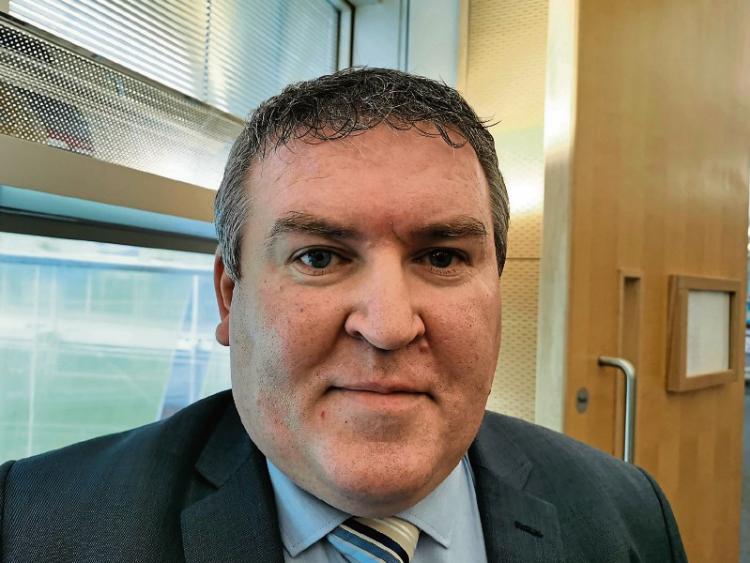 Disability will be focus for new councillor, Noel Connolly o

The new Sinn Fein councillor said he would be paying particular attention to making sure that the council supported those with disabilities.

At a specially convened meeting at Aras Chill Dara on Tuesday, February 25, the council unanimously agreed to the co-option. There was a wide welcome.

Former Sinn Fein member, now non party, Ide Cussen, said the atmosphere at the council when Sinn Fein councillors were elected locally in 2014, was “a quite chilly” but “people have changed in the meantime.”

The proposal was made by Fianna Fail's Daragh Fitzpatrick and seconded by Fine Gael's Mark Stafford.

A quorum was required and around 22 of the 40 councillors were present.

Also present were members of Cllr Connolly's family, including his wife, Olive, a nurse working at Cheeverstown, and children, James, Niamh and Jack.

Cllr Connolly has been a member of Sinn Fein for ten years, and like the Deputy Ryan, who he is replacing, has spent quite a bit of time observing council meetings from the public gallery.

He worked with Argus in retail for 15 years but stepped back after experiencing ill health.

He then took up a role as a charity shop manager with the St Vincent de Paul Society.

He is a member of Ellistown GAA club.

Cllr Connolly and his family live in the Lackagh area, which lies between Monasterevin, Kildare town and Rathangan.

Originally from Dublin, The Ward (between Finglas and Ashbourne), he and his family lived in Portarlington for ten years and have been in Lackagh for ten years.

Opening the short meeting, Mayor Suzanne Doyle, who will serve along with Cllr Connolly in the Kildare-Newbridge Municipal District, welcomed everyone and congratulated Deputy Ryan, who was also present.

Proposing Cllr Connolly , welcoming him and his family to the council, and wishing him all the best, Cllr Daragh Fitzpatrick said the new councillor regularly sat in the public gallery.

He also congratulated Deputy Ryan, who, he said, was very easy to work with.

Cllr Mark Stafford said he was delighted to second , who, he said, knew to be a very active member of Sinn Fein and in the community including Ellistown GFC where he trains.

Speaking as a councillor after the vote, Cllr Connolly thanked the members and his “long suffering” wife, Olive, “a political widow” as well as his “patient and understanding” children.

Cllr Connolly said that when he lost his job through illness, it gave him a new perspective on life.

He said he would work hard to make sure that the council dealt well with disability issues.

He said there was a lot of talk about change during the general election and the council should ask the people of Kildare what change they want, especially where there was a lower turnout in the election.

Chief Executive, Peter Carey, did likewise saying Kildare is a great county but has challenges.