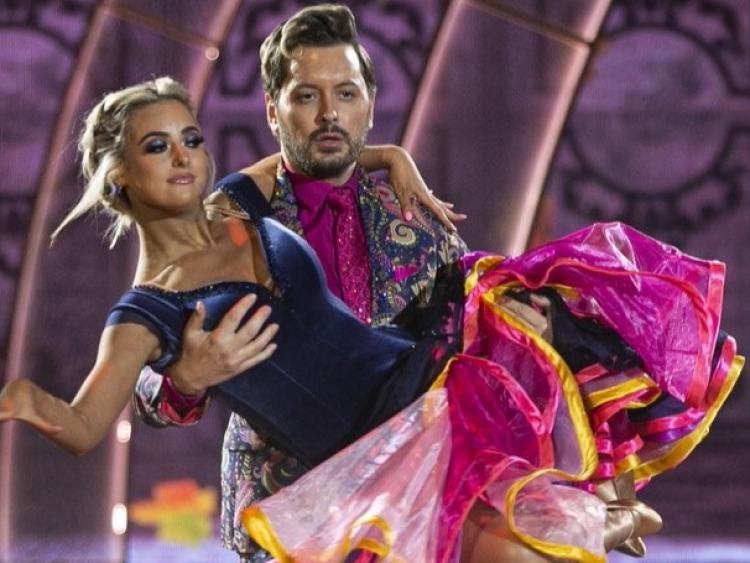 Rathangan man Brian Dowling and dance partner Laura Nolan pulled off the American Smooth on Dancing with the Stars over the weekend.

It was an eventful weekend for the celebrity dancers on ‘Dancing with the Stars Ireland’ as they took on ballroom dancing, with former Love Islander Yewande Biala the first elimination of the season.

First to take to the dancefloor this week was model Gráinne Gallanagh who danced a boppy, high energy and fun jive to Dear Future Husband by Meghan Trainor with her partner Kai Widdrington, and they scored a total of 20 points.

Former Kilkenny hurler Aidan Fogarty danced a foxtrot with Emily Barker to the Oasis track Half the World Away, scoring 23 points.

Former Olympic boxer Michael Carruth performed a samba to It's Not Unusual by Tom Jones with Karen Byrne, and they earned 11 points. Next up was former Love Island contestant Yewande Biala as she performed a Viennese waltz with Stephen Vincent to Lover by Taylor Swift, scoring 12 points.

Newbridge native and former B*Witched singer Sinéad O'Carroll was next to perform. Sinéad was joint top of the leader board last weekend for girls’ week, and she took to the dance floor with Ryan McShane for a Paso Doble to El Gato Montes by Arielle Dombasle. Before the routine, Sinéad said she was looking forward to ballroom week, and that she has enjoyed ballroom dancing since early childhood.

“When I was growing up in Newbridge, my mum and dad used to do a bit of ballroom dancing, and when we were kids we used to watch a programme called ‘Come Dancing’ which was a real treat,” she explained.

Similarly to last weekend, the B*Witched singer impressed all three judges, with Julian Benson jumping to his feet, saying: "Listen I felt like I was at the bull fight! It was fabulous. I loved the great shaping, no frills, no fuss, just great dancing on the floor."

Brian Redmond described Sinead and Ryan’s performance as a ‘perfect paso.’ Loraine Barry concluded: "I just want to go with Julian and Brian, that was a tremendous paso doble. It was that lovely postural circle. A little tip, be more deliberate, but a fantastic ending." They scored a total of 24 points.

Radio presenter Lottie Ryan performed a fierce contemporary ballroom dance with her pro partner Pasquale La Rocca, landing them 26 points from the judges and putting them top of the leader board.

Finally, it was Rathangan native and former Big Brother winner Brian Dowling and partner Laura Nolan's turn. They showcased a lively and energetic 60’s style American Smooth complete with shop windows and mannequins to Dance Monkey by Tones & I.

During rehearsal, Brian promised to make the American smooth "great again" and he didn't disappoint. He also said that he was very pleased that Laura was his partner for ballroom week. “I’m giving it 150% and I couldn’t imagine doing it without Laura,” he said.

After the duo finished their routine, judge Julian Benson described the performance as a ‘picture perfect opening.’ “On the floor, I loved the fact that you fused different dance styles into it. You sold it and you had fun so well done."

Brian said: "I loved this concept. I think that was a really interesting take on the American smooth."

Loraine concluded: "You definitely had me in this, I'm very impressed with your foxtrot, the shape the fluidity across the floor. Super good." They scored a total of 20 points which they were both pleased with.

However, there was an anxious wait for Brian and Laura, Mary and John and Yewande and Stephen as they waited to see who would be the first to leave the competition. Unfortunately, Yewande Biala didn’t earn the public’s vote of confidence and she along with dance partner Stephen Vincent were the first duo to be eliminated from the competition.

Dancing with the Stars continues on RTÉ One next Sunday, 26 January at 6.30pm with Movie Week.