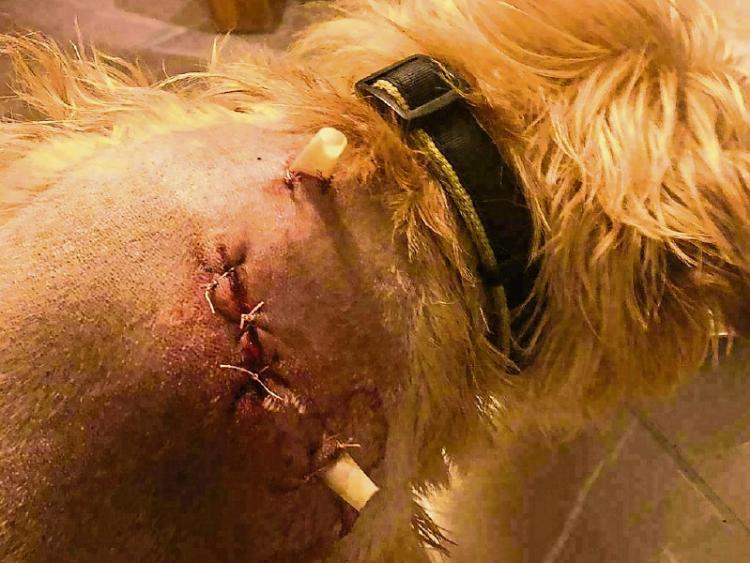 Ringo after being stitched up

A Newbridge dog lover has advised dog owners about checking muzzles after his pet dog, Ringo, was attacked by an alsatian dog at the Liffey Park recently.

Tim Sheehy, a resident of Newbridge for 20 years, had to take his 11 year old dog, a quiet Norfolk terrier to a veterinary surgeon, after Ringo was attacked by an alsatian, which was muzzled, on January 6 last.

He is concerned about the alsatian who attacked the terrier.

Mr Sheehy was walking Ringo, who was on a lead, along the Liffey river park on Monday night, January 5, between 7.00pm and 7.30pm.

They had gone into the park from the Liffey Hall end.

They were approached by a man with an alsatian, which was on a lead and appeared to be muzzled.

Both walkers had the dogs on the opposite side of each other. The dogs were as far away from each other as they could be.

The man with the alsatian was trying to control his dog but the dog lunged at Ringo biting him in the back.

Mr Sheehy said the man, who fell to the ground trying to hold his dog, was unable to control the animal, briefly. “In fairness to him, he continued to hold onto the dog with the lead and kept him back. If he had not done this, his dog would have killed mine.”

Mr Sheehy, a retired Dublin Bus driver and instructor of bus drivers, said it looked as if the muzzle on the dog was pulled aside leading to the alsatian biting Ringo. “It took only two to three seconds,” he said of the attack.

Mr Sheehy said the man got up and apologised. The man told Mr Sheehy it was a rescue dog and he had yet to get it trained.

At first Mr Sheehy did not see any cut on Ringo. It was dark.

The two men did not exchange names in the heat of the moment. “All I wanted to do was get away,” he said.

But when Mr Sheehy got out of the park, he noticed a cut on his dog. When he examined it further after he got home he brought Ringo to a late night vet in Naas.

The little terrier was shaved on his back and received stitches.

Mr Sheehy paid €326 for the operation.

When he spoke to the Leader on January 8, he said he expected there would be two more trips, including for the removal of stitches.

Mr Sheehy reported the matter to the gardai in Newbridge but was unable to provide a name of the alsatian owner to them.

He said he felt that the matter should be highlighted and is concerned, in particular, about muzzles not working properly. “I don’t know what would have happened if I had my grandchild with me,” he said.

Mr Sheehy said that Ringo, who is currently “a bit subdued,” is usually a sprightly and active 11 year old.

The dog, who is a little bit bigger than a Yorkshire terrier, is named after the Beatles drummer. “We have a number of drummers in the family,” said Mr Sheehy, a native of London, UK.

Mr Sheehy said: “I would hate to see the dog put down as I am a dog lover but I am not sure about this dog (the alsatian).”