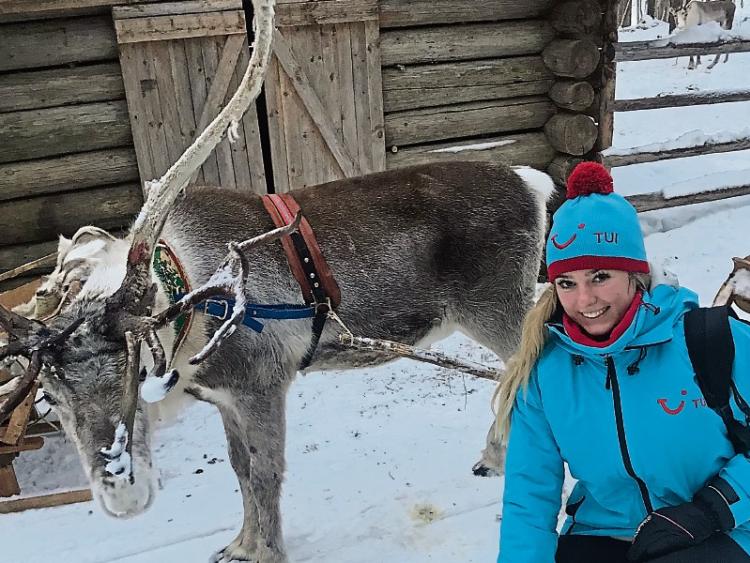 One Kildare girl who will be getting a sneak preview of what Santa will be bringing on Christmas day is Aoife Smith from Celbridge.

At the moment she is working close to where the great man, aided by Mrs Claus, elves and reindeer, takes off to bring presents around the world, including Kildare.

SEE ALSO: Santa posts letters to children all over Kildare

Aoife, a former Scoil Mochua and St Wolstan’s student, did her Leaving Cert in June 2018.

Aoife loved her spell in Cala Millor in Mallorca for five months. “It was great living beside the beach.”

She then spent some time in Lanzarote, moving there last January.

But in late November, just gone by, Aofe’s life took another geographical turn when she got the opportunity to work near Santa.

She took a flight to Lapland, flying into Rovaniemi, in Finland and is currently guiding visitors around one of Santa’s centres, to which people can go to take husky rides, see the northern lights and take a trip to Santa’s grotto in Rovaniemi, deep into the north Finnish forest region, around ten hours car drive from Helsinki in the south of Finland.

Aoife told the Leader that they expected around 168 flights into the region bringing 18,000 people for three to four night visits over the Christmas period.

Another 5,700 were expected on day visits. “I love the travel trade,” said Aoife, who received an award for being a top salesperson on Lanzarote. “I got to swim with the dolphins,” said Aoife, who is looking forward to seeing other parts of the world after her Lapland work is over January.

We have not heard yet if she got to visit Santa Claus herself, but news on that front will come in time.

When she is at home, Aoife lives in Oldtown Mill, Celbridge, with her mother, Ann Marie, and sister, Emelia.

She moved from 28 degrees of heat in Lanzarote to minus 23 degrees in Lapland. But the compensation for the colder weather is the chance to be close to Santa. “I believe in Santa,” Aoife told us.